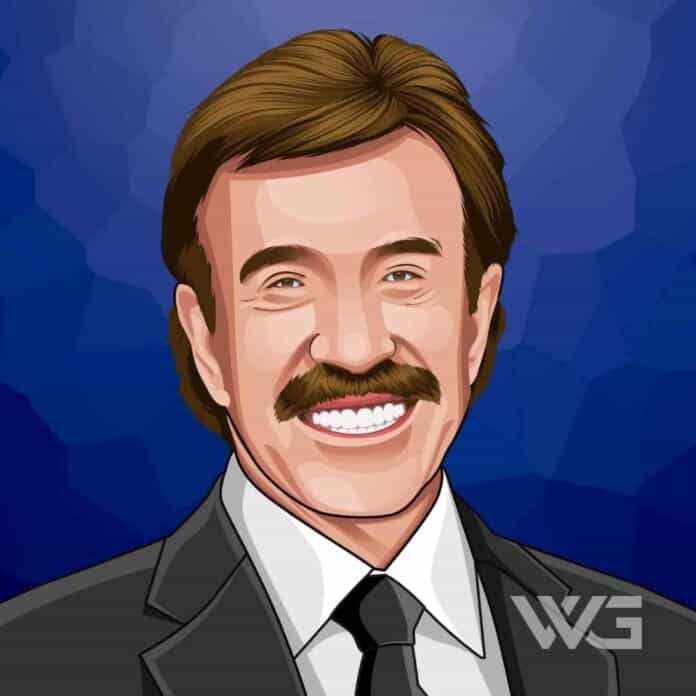 What is Chuck Norris’ net worth?

As of January 2023, Chuck Norris’ net worth is approximately $70 Million.

After serving in the United States Air Force, he won many martial arts championships and later founded his own school of fighting named Chun Kuk Do.

Carlos Ray Norris was born on the 10th of March, 1940, in Oklahoma. He was the eldest son of Wilma and Ray Norris. His father who did odd jobs, such as, mechanic, bus and truck driver, was an alcoholic.

He attended North Torrance High School. He was a shy and average student who did not think much of himself.

Norris began his career in the United States Air Force as an Air Policeman in 1958. He was sent to Osan Air Base in South Korea where he became interested in martial arts. He began training in Tang Soo Do and earned a black belt in that art.

Norris opened a chain of Karate schools numbering more than 30 schools spread over different cities during the 1960s. He was very popular as an instructor and had several celebrity students including Steve McQueen, Bob Barker, and Priscilla Presley.

By the late 1960s, he had worked on his technique and won the Professional Middleweight Karate champion title on 24 November 1968; he would defend this title five more times till 1974.

In 1990, he created the martial art style, Chun Kuk Do which is based on the Tang Soo Do art form. The Korean term Chun Kuk Do is loosely translated as ‘The Universal Way’ in English. The United Fighting Arts Federation (UFAF) holds the Chun Kuk Do world championship tournament in Nevada.

In 1990, he became the first-ever Westerner in the history of Tae Kwon Do to be given the rank of 8th Degree Black Belt Grand Master.

Here are some of the best highlights of Chuck Norris’ career:

“As the adage goes, ‘fool me once, shame on you. Fool me twice, shame on me’… It’s time for patriots everywhere to rally together again and take back America.” – Chuck Norris

“People have a hard time believing that, but not having a father around, being shy, I just never participated in sports much.” – Chuck Norris

“Where’s Barack Obama when Christmas references are being erased from civic calendars? Is he crying out in defense of religious liberty and our First Amendment? Nope. He’s as silent as a church mouse. And animosity toward religion continues to grow.” – Chuck Norris

“It’s amazing because people come up to me and say, ‘Chuck, you’re the luckiest guy in the world to be a world karate champion and a movie and TV star.’ When they say this to me, I kind of smile because luck had nothing to do with it; God had everything to do with it.” – Chuck Norris

“I’ve always found that anything worth achieving will always have obstacles in the way and you’ve got to have that drive and determination to overcome those obstacles on route to whatever it is that you want to accomplish.” – Chuck Norris

Now that you know all about Chuck Norris’ net worth, and how he achieved success; let’s take a look at some of the best lessons we can learn from him:

Chuck Norris never backs away from giving kudos for a job well done. And when you consider that only 21% of employees feel truly valued in their workplace (according to our Employee Engagement Report), there’s a lot for leaders to learn from Chuck’s thumbs up.

2. Be Direct and to the Point

Honest, direct feedback is the best type of feedback around. Chuck Norris never messes around. He’s a straight shooter and makes sure the point is heard loud and clear.

3. Use the Right Tool to Get the Job Done

Did you know that 26% of all employees report not having the tools they need to be successful in their roles (yep, that’s from our Employee Engagement Report too)?

That’s right, one in four of your team members is floundering a bit. But Chuck Norris knows better than that. He makes sure he’s always equipped with the tools he needs to knock down anything in his path.

How much is Chuck Norris worth?

Chuck Norris’ net worth is estimated to be $70 Million.

How old is Chuck Norris?

How tall is Chuck Norris?

Chuck Norris is a martial art expert who has appeared in a number of action films and television roles. He is most famous for being a martial artist and for founding his own school of martial arts, Chun Kuk Do.

In addition to being a martial artist and an actor, Norris is also a well-known author of Christian books.

As of January 2023, Chuck Norris’ net worth is estimated to be roughly $70 Million.

What do you think about Chuck Norris’ net worth? Leave a comment below.