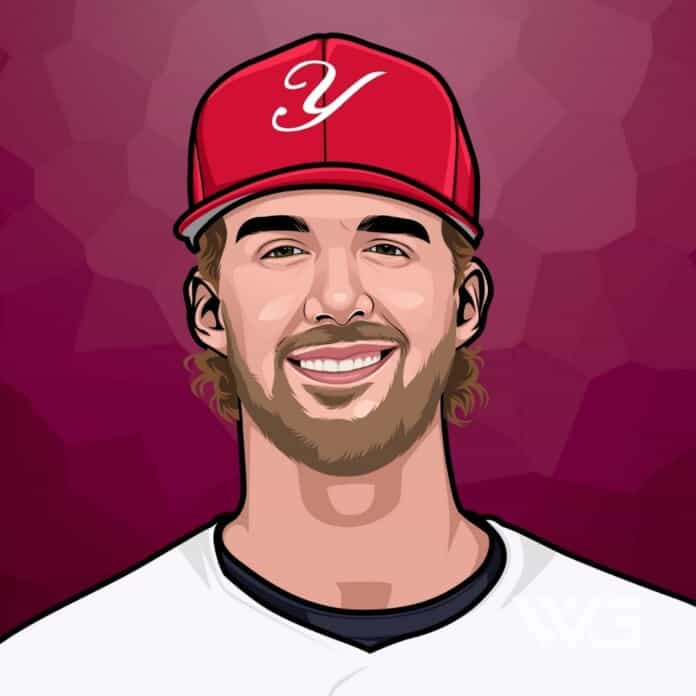 What is Aaron Nola’s net worth?

Nola is a pitcher for the Philadelphia Phillies of MLB. Nola played college baseball at Louisiana State University. In the first round, he was drafted by the Phillies, the seventh overall pick in the 2014 Major League Baseball draft.

He also played collegiate summer baseball with the Harwich Mariners of the Cape Cod Baseball League.

Aaron Michael Nola was born on the 4th of June, 1993, in Baton Rouge, Louisiana.

Nola is the youngest son of A.J., who runs his own remodeling and construction company while coaching baseball, and Stacie Nola, a part-time secretary.

He started to play baseball at the age of 9. His passion for the sport only began when he watched his older brother Austin Nola play in tournaments.

In the first round, seventh overall, Nola was drafted by the Philadelphia Phillies in the 2014 Major League Baseball draft. He signed with the Phillies on June 10 for a $3.3 million signing bonus.

In 2014 pitching for the Clearwater Threshers in the Class A-Advanced Florida State League, Nola was 2–3 with a 3.16 ERA. He then pitched for the Reading Fightin Phils in the Double-A Eastern League and was 2–0 with a 2.63 ERA.

In 2019, he signed a four-year, $45 million extension with the Phillies. The deal includes a club option for a fifth year worth $16 million, with a $4.25 million buyout.

The following year, Nola and his teammate Zack Wheeler tied for 11th among major league pitchers, recording 2.0 Wins Above Replacement that season.

Going into the 2021 season, Mike DePrisco of NBC Sports ranked Nola sixth among all 30 Opening Day pitchers, while Will Leitch of MLB.com placed him at number 10.

Here are the best highlights of Aaron Nola’s career:

“When baseball comes back, it’s going to be tough, but I’ve got confidence in the player’s association and the league that things are going to work out the way they should.” – Aaron Nola

“Palladino’s is my favorite Italian restaurant. It’s a cool place, a lot different from in the south where I’m from, and it’s got a lot of history. I like to walk around and look at the history of Philadelphia. I like going to the Rocky steps. There is a lot of old building, and people refresh my memory of what they are and what people were like here back in the day.” – Aaron Nola

“It’s definitely pretty cool. Those guys are great and what they’ve done in their careers leading up until now is amazing, and they’re solid all-around players. They can field, they can hit, and they play the game through better than anyone in the game can with the confidence they have.” – Aaron Nola

“Absolutely. Mainly for myself, being a younger guy, I feel like I can learn from the older guys. There are many guys in the clubhouse that have a lot more time than I have at this level, and I’m continuing to learn from them. And not just the older guys.” – Aaron Nola

“Yeah, for sure! I feel like that’s what a team should be, and we have great chemistry on this team so far. And I feel like at the start of spring training, that came together well. With having a bunch of new guys, we have a lot in common. There are so many new faces this year.” – Aaron Nola

Now that you know all about Aaron Nola’s net worth and how he achieved success; let’s take a look at some of the lessons that we can learn from him:

Some things are made by destiny, others by hard work, but the quality you don’t learn.

To live is to change, and to be perfect is to have changed often.

The purpose of our lives is to be happy.

How much is Aaron Nola worth?

Aaron Nola’s net worth is estimated to be $3 Million.

How old is Aaron Nola?

How tall is Aaron Nola?

Aaron Nola is a pitcher drafted by the Philadelphia Phillies in the first round of the 2014 MLB Draft.

He played for the United States collegiate national team during the summer of 2012. Drafted by the Toronto Blue Jays in 2011, he instead attended Louisiana State University, roommates with future MLB infielder Alex Bregman.

What do you think about Aaron Nola’s net worth? Leave a comment below.