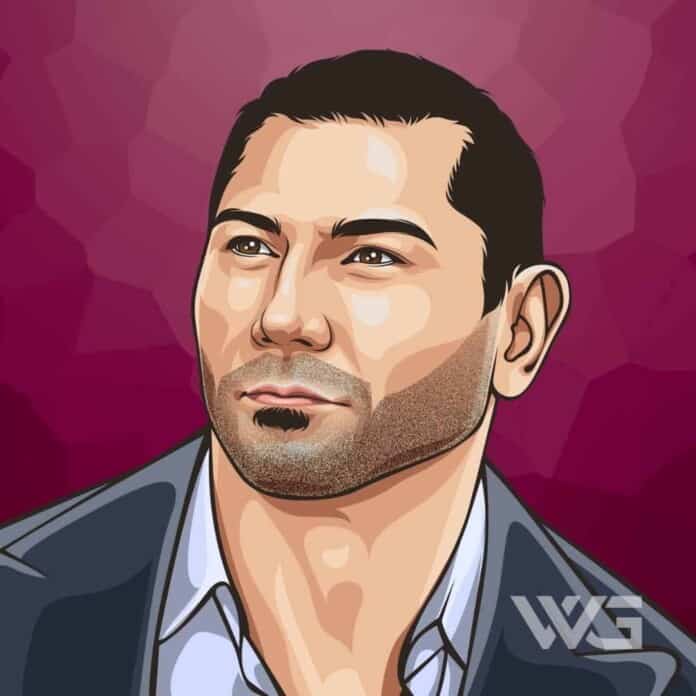 What is Dave Bautista’s net worth?

As of December 2022, Dave Bautista’s net worth is approximately $16 Million.

Dave Bautista is an American actor, and retired professional wrestler from Washington D.C.

From 2002 to 2010, he gained fame under the ring name Batista and became a six-time world champion by winning the World Heavyweight Championship four times and the WWE Championship twice.

He has a sister who was named after their mother as well as a brother named Michael. Bautista has talked about the financial difficulties his family had to face when he was a child.

After being involved in professional bodybuilding for a while, Dave Bautista wanted to pursue a career in professional wrestling. This was a period when the industry still had other promotions competing with WWE on equal footing.

Bautista then went to their biggest rival, WWE. After a successful tryout, WWE designated him to the Wild Samoan Training Center wrestling school to train under Afa Anoa’i.

In 2000, he made his debut under the ring name Leviathan and went on to win the OVW Heavyweight Championship. His rapid progression in the promotion convinced WWE to include him in the WWE main roster.

At the 2009 Extreme Rules, Batista became the WWE Champion for the first time after he defeated Orton. However, he had to vacate two days later due to a genuine injury to his left bicep. He would eventually win back the belt at the 2010 Elimination Chamber but would lose it to John Cena.

In 2013, after gaining modest popularity as an actor, Batista returned to WWE and won the 2014 Royal Rumble. Despite being reintroduced as a face character, Batista was booed by the audience.

Bautista has gone on to succeed in the acting world, majorly as the character Drax in Guardians of the Galaxy, and The Avengers.

Here are some of the best highlights of Dave Bautista’s career:

“I’m a poor kid from the streets. What I’ve been able to achieve has really just been through hard work and not letting anyone tell me that I couldn’t do something. I always try to encourage people to just pursue your dreams.” – Dave Bautista

“I’m not afraid to go up to people and pick their brains and ask for advice. To me, that’s how you get better. That’s how I’ve gotten better at everything I’ve ever done. Don’t be too proud to ask for help.” – Dave Bautista

“If you’re pursuing something that you love and you’re learning something new, every day, that’s the key to youth [staying young].” – Dave Bautista

“I didn’t want to be a movie star, I wanted to be an actor. Because acting is what I fell in love with, and acting is what is still challenging for me.” – Dave Bautista

“I’m a poor kid from the streets. What I’ve been able to achieve has really just been through hard work and not letting anyone tell me that I couldn’t do something. I always try to encourage people to just pursue your dreams.” – Dave Bautista

Now that you know all about Dave Bautista’s net worth, and how he achieved success; let’s take a look at some of the lessons we can learn from him:

You can’t preach change. If you want to bring about change, present unequivocal facts, and inspire through your actions.

Be the change you want to see in the world. Simple.

If something is worth doing it’s worth doing with care and attention. You’ll get far greater satisfaction from doing tasks methodically, and with great attention to detail, than by rushing through them in a bid to get more done.

How much is Dave Bautista worth?

Dave Bautista’s net worth is estimated to be $16 Million.

How old is Dave Bautista?

How tall is Dave Bautista?

Dave Bautista is an actor and former professional wrestler from America. Bautista has been crowned the World Heavyweight Champion four times and the WWE Champion twice.

As of December 2022, Dave Bautista’s net worth is roughly $16 Million.

What do you think about Dave Bautista’s net worth? Leave a comment below.

What is Lamar Odom's net worth? Introduction  As of ,...