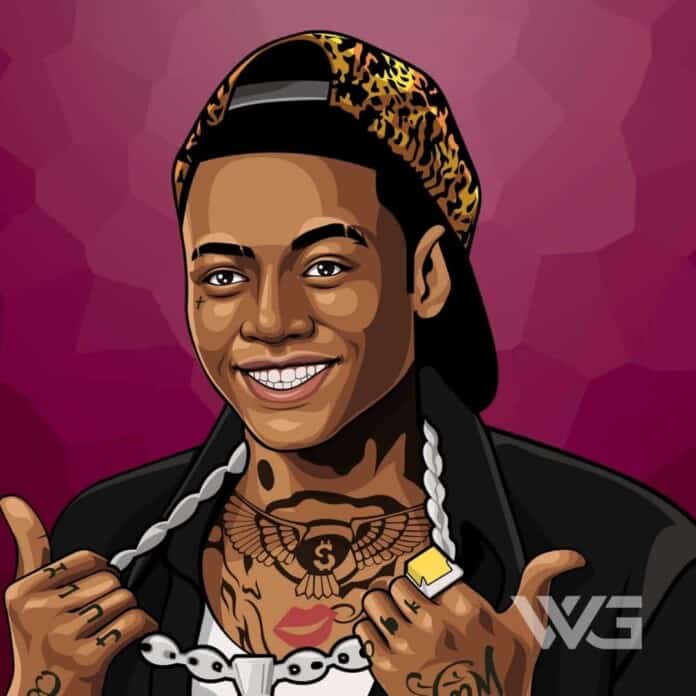 What is Soulja Boy’s net worth?

As of February 2023, Soulja Boy’s net worth is estimated at around $30 Million. That’s quite an incredible figure when you consider his relatively young age.

Born and raised in Chicago, Illinois, the popular American rapper DeAndre Cortez Way – or Soulja Boy, as he is commonly known – released his first hit single, Crank That, in 2007, at the age of just 17.

The song went mainstream and became a huge hit, but what was interesting about this first Soulja Boy hit is that the tune caused a unique dance craze across the clubs and hip-hop/rap bars of America. As the dance became more popular, so did the tune, leading to a perfect storm of virility and propelling Soulja Boy into the mainstream.

Eventually peaking at number one in the charts, the release held that position for seven weeks through September and October of 2007, firmly announcing Soulja Boy as a serious player in the rap music industry.

It is not too unusual for American rappers to land a little lucky with one-hit wonders, but Soulja Boy cemented his fame with further hits while also producing and mixing for other artists, ensuring a firm reputation as a serious artist.

With the release of his debut album Souljaboytellem.com in 2007, his following album iSouljaBoyTellem in 2008 came with two further hit singles called Turn My Swag On and Kiss Me thru the Phone, which both made the U.S Billboard top 20.

After being raised until the age of six in Chicago, Soulja Boy moved to Batesville, Mississippi, with his family, where he settled at school and made new friends. With a keen interest in music – specifically rap and hip hop – his father spotted potential in young DeAndre and invested in a recording studio at the age of just 14.

From there, Soulja Boy continued to develop his potential further, and he began creating his own tunes and raps. Becoming something of a respected, albeit quite young rapper in the state, Soulja Boy began experimenting with online releases.

In late 2005, Soulja Boy released his recordings on the (then new) platform YouTube. Reviews The songs were well received by the community, and Soulja Boy then followed this by creating web pages on MySpace.

In the spring of 2007, he produced Crank That together with his first self-produced album Unsigned and Still Major; generally speaking this was da album before da album, with a self-funded video filmed showcasing the now well-known ‘Soulja Boy’ dance.

Towards the end of that year, Crank That was beginning to gain traction on rap stations, which in turn gave the artist a level of fame that led to a signing with Interscope Records.

During that same year, Crank That was played on the popular network series Entourage, and by late October/early September, he found success when the song reached number 1 on the Billboard Hot 100 charts.

His first record label album Souljaboytellem.com was released in the U.S. in October, reaching number 4 on the Billboard 200 and Hip-Hop Albums charts.

A Grammy nomination followed for Crank That, with the artist losing only to Kanye West.

After finding fame through web-based platforms and the success of his first hit and album, it was widely believed that Soulja Boy would be the next big thing. It proved to be a surprise to many when his second and third albums flopped, with many artists supposing he would be yet another one-hit wonder.

But by going back to his roots and exploring internet platforms again, Soulja Boy cemented his popularity and found fame, leading to his major signing.

Soulja Boy earned almost $7 million through 2012, leading to Forbes classing him as one of the main Hip Hop Cash Kings for that year.

The timing was a factor in Soulja Boys’ success. Around those early streaming years, the whole bad-boy image of online rappers was beginning to gain traction. The more controversy, the better, in many cases. Soulja Boy exploited this by putting out quite risky content, often involving violence along with a sometimes sexually charged theme.

It was this risky, edgy content, combined with energetic ‘Southern Sound’ rap that was becoming popular around then, that helped confirm Soulja Boys’ success and launch him into the mainstream.

In the summer of 2008, the well-known American rapper Ice-T criticized Soulja Boy for ‘destroying rap music’ and being generally untalented compared to other rappers of the time.

In turn, Soulja Boy hit back by releasing YouTube videos joking about the age of Ice-T, who was born in 1958.

The feud probably did very little to harm Soulja Boy’s brand image and if anything, Ice-T’s public dislike of the artist helped develop his fame even more. The feud was only temporary, and both artists have become friends since then.

Soulja Boy was featured in the NBA playoff series featuring Cleveland and Washington. In another spate of trash-talking early on in the series, one of the players called Cleveland mega-star LeBron James overrated, which led to Lebron James stating that “I won’t return the insult, as that would be like Jay-Z replying to Soulja Boy.”

Soulja Boy made another feature of the series, with his rap music being played live over the sound system, aimed at irritating Lebron James.

Since those early years, Soulja Boy has become hugely successful and is a firm mainstay in the rap scene, with regular mixtapes released online, in addition to studio-produced singles, albums, and controversial music videos.

Since then, he has released several mixtapes, singles, albums, and videos, which have greatly contributed to his success.

Despite his young age, Soulja Boy has enjoyed wide success through various records, mixtapes, videos, and radio specials. His highlight reel is quite impressive, given the short span of time he has been in the spotlight.

Since 2007, he is mostly known for the following hits:

“My first single I was nominated for a Grammy with ‘Crank That,’ and I lost a Grammy to Kanye West, but it was still such a big deal for me to be nominated anyway.” – Soulja Boy

“Words are powerful. When I make mistakes I just try to come back and clarify what I meant.” – Soulja Boy

“The Internet had been a BIG help with my career. My advice to musicians, the Internet is the key. It gets your music heard all across the world.” – Soulja Boy

“If I’m doing something it’s coming from a kind heart.” – Soulja Boy

“If I’m going to make music for the streets or the clubs or whatever, I go at it with 110 percent.” – Soulja Boy

View our larger collection of the best Soulja Boy quotes!

4 Rules for Success from Soulja Boy

So, Soulja Boy is a successful rapper who has found wealth and fame in a relatively short period of time. But what lessons can we learn from his journey?

Soulja boy net worth currently stands at around $30 million – and it could be argued that most of this fortune was earned under his own steam, releasing his own self-produced music. The first record label signing did very little to ensure his mainstream success, and it should be noted that his own determination and self-promotion have helped boost his status.

What lessons can we take from his success? Let’s take a look at how Soulja Boy focused on key personality traits to develop his fame.

1. Do everything to the best of your ability

Even if you don’t succeed, at least you can say that you gave it your all and that you fought as best as you possibly could. Putting your heart and soul into things that you are passionate about makes everything much more meaningful, which in turn should lead to success to some degree. With Soulja boy, net worth has become huge owing to the pursuit of passion through dogged determination.

A few words can go a long way, be mindful of what you say, post, and comment because a person’s words say a lot about them. You never know what kind of effect your words can have on other people so.

In one of his previous quotes, Soulja Boy states that when he lost a Grammy to Kanye West, he was still grateful for even being nominated in the first place.

Instead of being upset or angry about things that you don’t have or you lost, you should be happy and grateful for the things, people, and opportunities you have had.

4. The internet is your friend

Soulja Boy is a popular and talented rapper, and he is extremely passionate about what he does. At only 27 years old, Soulja Boy’s net worth is already $30 Million and will gain more as he continues to make music.

What do you think about Soulja Boy’s net worth? Leave a comment below.