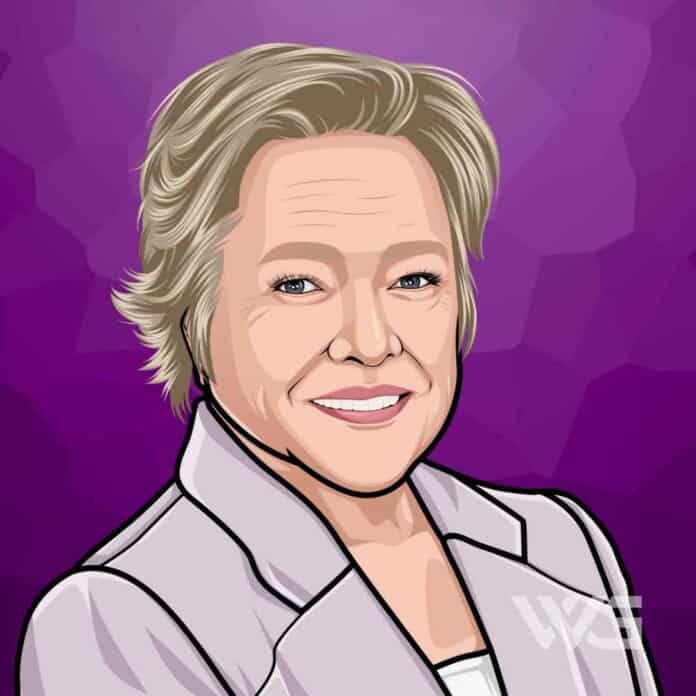 What is Kathy Bates’ net worth?

Kathy Bates is an American actress and director.

Bates has been the recipient of numerous accolades, including two Primetime Emmy Awards, an Academy Award, and two Golden Globe Awards. Throughout the 1970s and early 1980s, she continued to perform on screen and stage.

She received a Tony Award nomination for her performance in ‘Night, Mother.’

As of February 2023, Kathy Bates’ net worth is estimated to be roughly $20 Million.

Kathleen Doyle Bates was born on the 28th of June, 1948, in Memphis, Tennessee.

Bates is the youngest of three daughters of Langdon Doyle Bates and Bertye Kathleen. Her great-great-grandfather was an Irish emigrant to New Orleans, Louisiana.

Bates graduated from White Station High School in 1965 and Southern Methodist University in 1969. She moved to New York City in 1970 to pursue an acting career.

After her education, Bates moved to New York to pursue a career in acting. She took up odd jobs in the city to survive a living. She secured a role for herself alongside Christopher Walken at Buffalo’s Studio Arena Theatre in Lanford Wilson’s premiere of ‘Lemon Sky.’

By the mid-1970s, she named herself among the New York’s regional theatre scene by some exceptional performance in shows like ‘Casserole’ and ‘A Quality of Mercy.’

Bates played Dolores Claiborne’s character in the movie ‘Dolores Claiborne’ in 1995; her performance in the film was appreciated. She gained even more attention when she starred in ‘Titanic.’

In 2002, Bates starred in ‘About Schmidt’, for which she received her third Academy Award nomination. Following this, she was a part of the star cast of several movies such as ‘Around the World in 80 Days’, ‘Relative Strangers’ and ‘Failure to Launch.’  From 2010 to 2011, she took up a recurring role in the comedy series ‘The Office.’

She has also starred in the legal drama ‘Henry’s Law’ which lasted for two seasons. Bates starred as writer Gertrude Stein in Woody Allen‘s ‘Midnight in Paris.’

How Does Kathy Bates Spend Her Money?

Bates is a proud owner of a beautiful home in Los Angeles. Her home comes with 8 bedrooms, 4 bathrooms, a spa, a pool, a massive garden, and a library. She purchased the house in 2001 for $2.9 million.

Here are some of the best highlights of Kathy Bates’ career:

“The bottom line is that I’m an actor, so when somebody pitches me a great part, it’s a no-brainer. You never know what it’s gonna be like, in terms of the experience. You can be really excited about a part that can turn out shitty, you can have a bad time, there’s a bad egg or two or three, in the bunch, or the producers are weird, or something like that.” – Kathy Bates

“I was never an ingenue. I’ve always just been a character actor. When I was younger, it was a real problem because I was never pretty enough. It was hard, not just for the lack of work, but because you have to face up to how people are looking at you.” – Kathy Bates

“And people are always saying: ‘Well, you go to Hollywood and you get yourself a film career or a TV series, and then you can do anything you want. Because then you’ve got the clout.’ That had always sounded like a lot of hooey to me, but now I think it’s true, unfortunately.” – Kathy Bates

“Now, if I go through it again, I think I would be a lot more open about it. I admire open people, like Melissa Ethridge and women I see walking around facing it without wigs and all of that stuff. I think I would be more courageous next time.” – Kathy Bates

“My mother used to tell this corny story about how the doctor smacked me on the behind when I was born, and I thought it was applause, and I have been looking for it ever since.” – Kathy Bates

“I’m always so nervous when I have to do interviews or be on ‘The Tonight Show’ or the ‘Oprah’ show, where I have to be myself. I don’t know why that’s such a big deal – being yourself. But for some reason, I feel good in a dark room talking to actors about acting, doing the acting. I like sitting backstage watching people work.” – Kathy Bates

Now that you know all about Kathy Bates’ net worth and how she achieved success; let’s take a look at some of the lessons we can learn from her:

A heart can only discover what it really wants with experience.

We all love to hear a good story, and we save our stories in books. We keep our books in libraries. Libraries are the storehouses full of all those stories and secrets.

Focus on being you; people nowadays are focusing too much on being someone else.

How much is Kathy Bates worth?

Kathy Bates’ net worth is estimated to be $20 Million.

How old is Kathy Bates?

How tall is Kathy Bates?

Kathy Bates is an American actress best known for her performances both onscreen and onstage, appearing in more than 120 films and television projects.

Throughout her career, she has starred in ‘Misery,’ ‘Fried Green Tomatoes,’ ‘Dolores Claiborne,’ ‘Titanic,’ ‘The Waterboy,’ ‘About Schmidt’, and ‘American Horror Story.’

As of February 2023, Kathy Bates’ net worth is estimated to be roughly $20 Million.

What do you think about Kathy Bates’ net worth? Leave a comment below.