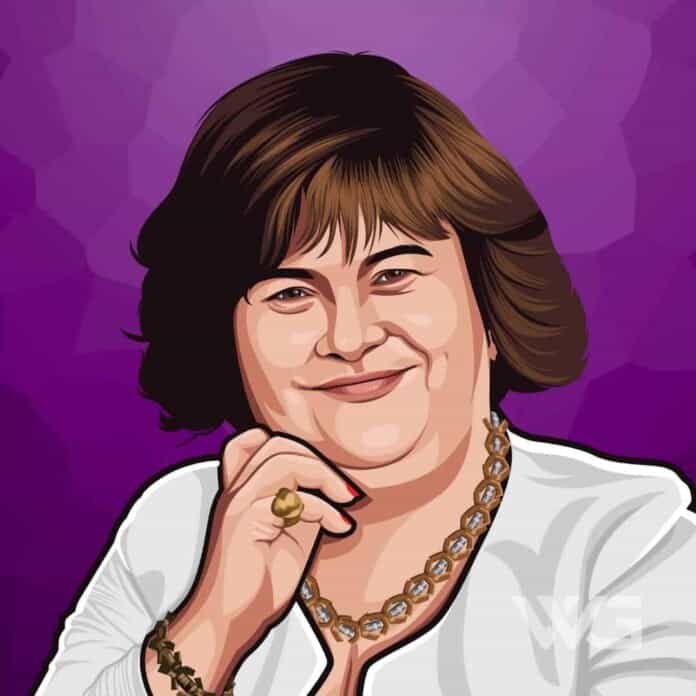 What is Susan Boyle’s net worth?

Boyle rose to fame after starring in the third series of ‘Britain’s Got Talent’. Her debut album ‘I Dreamed a Dream’ was released in 2009 and became the UK’s best-selling album of all time.

It also set a record for the biggest sales in its first week by a debut album. In her first year of fame, she made £6.8 million to release I Dreamed a Dream.

As of February 2023, Susan Boyle’s net worth is estimated to be roughly $40 Million.

Susan Magdalene Boyle was born on the 1st of April, 1961, in Blackburn, England.

Boyle is the daughter of Irish immigrant parents, Patrick and Bridget Boyle. Her father was a miner, and her mother was a shorthand typist. Susan is the youngest of nine children.

Boyle was deprived of oxygen when she was born, and this led to mild brain damage. Later on, she suffered from psychological issues caused by her condition, which also led to bullying in school.

Boyle’s audition on ‘Britain’s Got Talent’ was watched by more than 27 million people on YouTube to date.

Her performance is considered to be one of the best audition ever on a talent show. She was one of the semi-finalists, and by the end of the show, she eventually lost in the finals.

In 2009, she released her debut album, ‘I Dreamed a Dream’. The album was regarded as one of the highest-selling British albums of all time. In its first week, the album sold more than 400 thousand copies in the UK.

The same year, she appeared in a TV special titled ‘I Dreamed a Dream: the Susan Boyle Story.’ On the show, she performed with Elaine Paige, watched by more than 10 million people in the UK.

The following year, Boyle released another album titled ‘The Gift,’ which was another success for Boyle. In the same year, she became one of the three acts ever to have two-chart topping tracks.

How Does Susan Boyle Spend Her Money?

Susan Boyle may be a millionaire, but she still lives in her mother’s house. She has made all of her dreams come true, and she refuses to change even if her bank balances increase.

Despite being a millionaire, Boyle has to choose to stay in her childhood home. However, she has spent some money preventing the home with a modern kitchen and a cozy living room.

Boyle has basically rebuilt the house to a more modern version. She has admitted in an interview that she hasn’t splashed her money out on anything since she became a millionaire. She has bought a fur coat, a piano, and a bike.

Here are some of the best highlights of Susan Boyle’s career:

“I was slightly brain damaged at birth, and I want people to like me to see that they shouldn’t let a disability get in the way. I want to raise awareness – I want to turn my disability into ability.” – Susan Boyle

“Asperger’s doesn’t define me. It’s a condition that I have to live with and work through, but I feel more relaxed about myself. People will have a greater understanding of who I am and why I do the things I do.” – Susan Boyle

“It was my Mum who got me into singing properly – she knew I had to do something with my voice because she knew I was talented. She was the one who pushed me into joining a choir all those years ago when I was about 12. I remember she told me to start with the choir and just see where it took me.” – Susan Boyle

“Grownups always tell you that “sticks and stones will break your bones, but words will never hurt you.” They say it as if it’s a kind of spell that’s going to protect you. I’ve never seen the logic of it. Cuts and bruises quickly disappear. You forget all about them. The psychological wounds inflicted by bullies with words go much deeper.” – Susan Boyle

“I live myself with my cat Pebbles. She isn’t enjoying the attention as much as me – she ran off up the stairs as soon as the film crew for the show came into the house. She didn’t come down for hours. But I have the support of all my brothers and sisters and my neighbors and friends – everyone thinks it’s just great.” – Susan Boyle

Now that you know all about Susan Boyle’s net worth, and how she achieved success; let’s take a look at some of the lessons we can learn from her:

1. Be Kind To Yourself

There are enough people in the world who are going to write you off. You don’t need to do that to yourself.

People are often too quick to judge a person by the way they look or by their quirks of behavior.

3. Takes Time For People To Mature

The ones who were mean to Boyle are now nice to her.

How much is Susan Boyle worth?

Susan Boyle’s net worth is estimated to be $40 Million.

How old is Susan Boyle?

How tall is Susan Boyle?

Susan Boyle is a well-established Scottish singer who is best known for her first audition performance on ‘Britain’s Got Talent’.

Her debut album became the highest-selling British album of all time. The album she released after was also successful.

Today, she has sold more than 25 million copies of her albums worldwide, and she has earned two Grammy nominations.

As of February 2023, Susan Boyle’s net worth is estimated to be roughly $40 Million.

What do you think about Susan Boyle’s net worth? Leave a comment below.