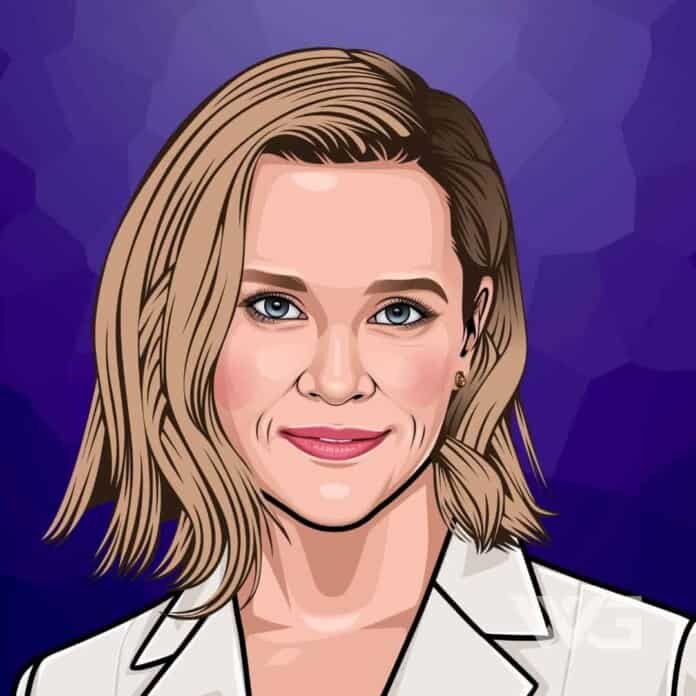 What is Reese Witherspoon’s net worth?

As of November 2022, Reese Witherspoon’s net worth is estimated to be roughly $300 Million. Today she is one of the most noticeable and popular actresses.

Witherspoon began her acting career as a teenager and has since then won several awards. She had her breakthrough role in 2001 when she played the role as ‘Elle Woods’ in ‘Legally Blonde’.

Laura Jeanne Reese Witherspoon was born in New Orleans, Louisiana on the 22nd of March, 1976.

Witherspoon is the daughter of John Draper and Mary Elizabeth Witherspoon. She mostly spent her childhood in Nashville because her father worked for the U.S army.

Witherspoon attended Stanford University where she was a cheerleader. She left the university, later on, to pursue her dream to become an actor.

Witherspoon made her film debut in 1991, in ‘The Man in the Moon’, and her portrayal of a rural teenager was widely appreciated by film critics.

The following year she was cast in the movie ‘Wildflower’ and ‘Desperate Choices: To Save My Child’. She appeared in some television series’ and movies like ‘A Far off Place’ and ‘Fear’ alongside Mark Wahlberg.

She returned in 1998 and was cast in three movies the following year: ‘Pleasantville’, ‘Twilight’ and ‘Overnight Delivery’. Witherspoon followed it up with the films ‘Cruel Intentions’ and ‘Election’.

Her big breakthrough film came in 2001 when she starred in ‘Legally Blonde’.

In 2005, Witherspoon starred in ‘Walk the Line’ where she played the role of Johnny Cash’s second wife June Carter Cash and turned in the best performance of her career.

The critics loved her performance in the film and she went on to win the biggest awards for the film including the Academy Award for Best Actress, BAFTA, Screen Guilds Awards and the Golden Globe.

In 2014, Witherspoon starred in the films ‘The Good Lie’ and ‘Wild’ which attained all the accolades and her portrayal of a woman scarred by tragedies earned her an Academy Award nomination for Best Actress.

Since then has Witherspoon collaborated with stars such as Mark Wahlberg, Sofia Vergara, and Dakota Fanning.

As of November 2022, Reese Witherspoon’s net worth is $200 Million, making her one of the richest actresses in the movie industry.

Here are some of the best highlights of Reese Witherspoon’s career:

“I’ve had multiple experiences of harassment and sexual assault, and I don’t speak about them very often. But after hearing all the stories these past few days and hearing these brave women speak up tonight, the things that we’re kind of told to sweep under the rug and not talk about, it’s made me want to speak up and speak up loudly because I felt less alone this week than I’ve ever felt in my entire career,” – Reese Witherspoon

“If you’re one of those people who has that little voice in the back of her mind saying, ‘Maybe I could do [fill in the blank],’ don’t tell it to be quiet. Give it a little room to grow, and try to find an environment it can grow in.” – Reese Witherspoon

“As an artist, I feel more strongly than ever that my job on earth is to tell the stories of the Invisibles, and women have been invisible on film for a long time.” – Reese Witherspoon

It’s funny that it all becomes about clothes. It’s bizarre. You work your butt off and then you win an award and it’s all about your dress. You can’t get away from it.” – Reese Witherspoon

Now you know all about Reese Witherspoon’s net worth, and how she achieved success; let’s take a look at some of the lessons we can learn from her:

To fully experience greater things in life such as love, you have to be willing to love. No matter what the outcome is in the end, you’ll benefit from love. Loving fully will teach you life lessons that only love can give you.

2. Bad Things Happen, Deal With It

Bad things and good things will happen, life is like a rollercoaster. Learn to deal with it and move on and if you allow negative energy to affect your life, you’ll find it hard to change as a human being.

3. Your Career Shouldn’t Be Your Life

How much is Reese Witherspoon worth?

Reese Witherspoon’s net worth is estimated to be $300 Million.

How old is Reese Witherspoon?

How tall is Reese Witherspoon?

Reese Witherspoon has won several awards for her incredible performances in multiple films. Witherspoon has collaborated with some great actors throughout her career and there’s no doubt that her net worth will continue to increase in her future.

As of November 2022, Reese Witherspoon’s net worth is roughly $300 Million, making her one of the most popular and wealthiest actresses in Hollywood.

What do you think about Reese Witherspoon’s net worth? Leave a comment below.