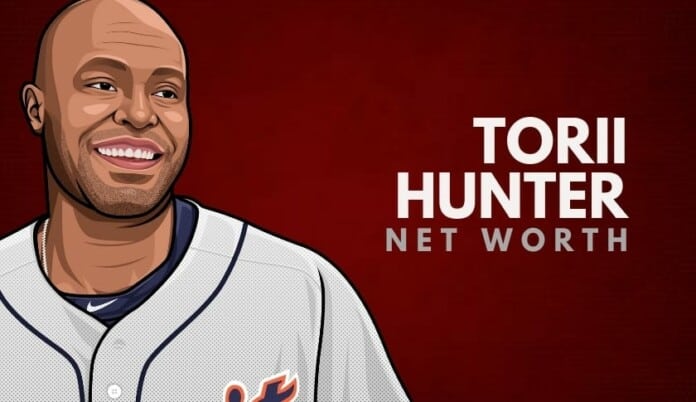 What is Torii Hunter’s net worth?

Hunter has played in the MLP for the Minnesota Twins, Los Angeles Angels of Anaheim, and Detroit Tigers from 1997 through 2015. He is a five-time All-Star, won nine consecutive Gold Glove Awards as a center fielder, and was a two-time Silver Slugger Award winner.

Torii Hunter was born on the 18th of July, 1975, in Arkansas. Hunter attended Pine Bluff High School. Alongside his brothers, he lived in a downtown fairly impoverished neighborhood just off Main Street.

He began playing baseball at the age of 8. Hunter excelled in baseball, football, basketball, and track. Early on in high school, Hunter was actually a stand-out in sports other than baseball but would receive All-State honors for his junior and senior seasons.

Hunter made a career out of doing what he loves, playing baseball. His career began in 1993 when he was drafted by the Minnesota Twins right out of high school.

It wasn’t until 1999 that Hunter vegan as a regular starter. The next year, Hunter broke out in a big way, but he was sent back to triple-A after his batting average decreased to the point where he needed to work on his mechanic’s at-bat.

After this, his star continued to rise. He became a true baseball star. In 2007, Hunter signed with the Los Angeles Angels after turning down a $45 million deal with the Twins. This was a good indicator of any of his increased success in the game of baseball.

Apart from the game, Hunter contributes to a variety of charitable causes. It includes education and an initiative to maintain baseball diamonds in lower-income neighborhoods. Hunter continues to have many different kinds of success on and off the field.

How Does Torii Hunter Spend His Money?

Hunter has contributed to many charities, including the Torii Hunter Project Education Initiative, which provides college scholarships to students in California, Arkansas, Nevada, and Minnesota.

He has also supported the Big Brothers and the Prostate Cancer Foundation, and in addition, Hunter helped fund the construction of a youth softball field in Placentia.

Here are some of the best highlights of Torii Hunter’s career:

“It hits me every time I read it. I’ve always read Proverbs regularly because it helps me deal with what’s happening every day in real life.” – Torii Hunter

“I’m going to put his jersey in there and leave it in there. He’s somebody who inspired me to play the game of baseball. This guy pushed me to get to the major leagues. ‘I want you to come to take my spot, OK, Little Puck.’ He called me Little Puck.” – Torii Hunter

“When I came up in ’99, I played with those guys in the minor leagues, so we had the chemistry already. There are a lot of new faces in here. A lot of guys, I don’t really know their names.”  – Torii Hunter

Now that you know all about Torii Hunter’s net worth and how he achieved success; let’s take a look at some of the lessons we can learn from him:

When you do what you’re supposed to do and don’t complain much.

With faith, everything will be taken care of. Even the difficult times become learning experiences to help make our faith stronger.

Without faith, there are only low times.

How much is Torii Hunter worth?

Torii Hunter’s net worth is estimated to be $60 Million.

How old is Torii Hunter?

How tall is Torii Hunter?

Torii Hunter is an American professional baseball player who is currently signed to a 5 year $90 million guaranteed contract with the Anaheim Angels. Hunter has gained his massive and impressive net worth through his career with the Minnesota Twins and the Los Angeles Angels.

He has shown his athletic ability, and he has taken away many home runs throughout his 11-year baseball career for the Minnesota Twins. ESPN commentators have called him a “daily web gem” referring to ESPN’s nightly highlight reel. He has won seven Gold Glove Awards.

What do you think about Torii Hunter’s net worth? Leave a comment below.