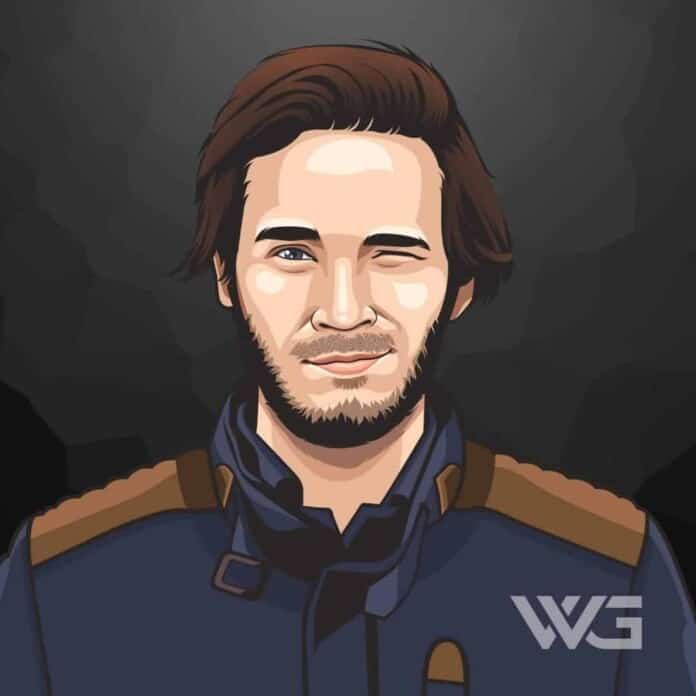 What is PewDiePie’s net worth?

As of February 2023, PewDiePie’s net worth is estimated to be $40 Million. Felix Arvid Ulf Kjellberg, who is famously known by his online pseudonym PewDiePie, is a Swedish YouTuber. He’s also the most subscribed-to channel on YouTube.

His gaming videos on YouTube have helped him to become a gaming personality.

Felix was born on 24th October, 1989, in Gothenburg, Sweden. From a young age he was interested in art and was an avid gamer during his days in high school.

He graduated from High school from Göteborgs Högre Samskola in 2008 and went on to study at Chalmers University of Technology. But, Felix felt that he didn’t belong there and so he decided to drop out to do what makes him happy.

Even though his early days were hard, he said in a video that he bought equipment to get started by selling his works of Photoshop. He came up with the name of the channel to be ‘PewDiePie‘ even though at first it was just Pewdie.

PewDiePie’s energetic and funny commentating on games with epic reactions made him a viral phenomenon very quickly, and he became the most subscribed YouTube channel in 2012 with 5 million subscribers.

He went on to sign with Makers Studio and started to get attention from the media as well. PewDiePie’s channel now has more than 3500 videos with over 104 million subscribers.

His channel has included many different game series and segments over the years among which his Let’s Play series has been widely popular.

As his popularity grew and reports about the large sums of money were starting to come out publicly, he got a lot of attention as well as hate at the same time.

That is why he has several videos dedicated to mean comments. His signature is the brofist that he does at the end of every video. He also posts vlogs time and again and has a following of any mainstream media.

In 2015, he released his own game called PewDiePie: Legend of the Brofist.

He then went on to also release his book that was called This Book Loves You. PewDiePie has won several accolades among the gaming area on Youtube, most notably winning the Best Gaming Channel, Show, or Series in the 5th Streamy Awards.

Forbes named PewDiePie as the highest-earning YouTuber with his annual income reaching $15 million in 2016.

YouTube clearly isn’t the only source of income for PewDiePie, as he is also involved with many other productions and projects.

He is also a big giver and has a project called the ‘Water Campaign’. Through the program, he managed to raise over $400,000 and has also been involved with many collaborations over the years.

In recent times, Felix has also been giving a new edge to his channel with some of his free speech videos following controversies over some of the content of his videos.

As of February 2023, PewDiePie’s net worth is estimated to be $40 Million.

How Does PewDiePie Spend His Money?

PewDiePie must be spending all his millions on new cars and houses, right?

Every aspiring YouTuber is always missing one thing. That thing would be equipment. Throughout his years on YouTube, he’s had time to go through several enhancements in his equipment library, including everything from mics to new cameras.

Speaking of equipment, now you need something to use all of it with. For PewDiePie, this is his computer.

Even though PewDiePie is mostly private about where he spends his money we know that he gives away a lot of his income to different charities and organizations in need. When he received 25 million subscribers he celebrated with a charity drive.

Some of the names he’s been helping out are Save the Children, Charity: Water, World Wildlife Fund, Child Rights for You, National Alliance on Mental Illness, and much more.

Here are some of the best highlights of PewDiePie’s career:

“My parents said that sitting at home playing video games all day won’t bring you anywhere in life.” – PewDiePie

“When I started my YouTube channel in 2010, I never imagined that one day it would be the most subscribed channel in the world and that I would be a part of such a great community.” – PewDiePie

“Dropping the news to my parents that I was skipping my ‘dream education’ at Chalmers to sit at home recording videos while playing video games was not easy.” – PewDiePie

“With my channel, and what people associate with Internet, most people think it goes viral, you become this huge thing super quick. I never had an explosion or a huge thing. It’s just been something that has progressively been growing. It’s been building.” – PewDiePie

“It was so much easier to connect with my fans when I was smaller. I could answer every message, and I enjoyed doing that.” – PewDiePie

View our larger collection of the best PewDiePie quotes!

How much is PewDiePie worth?

PewDiePie’s net worth is estimated to be $40 Million.

How old is PewDiePie?

How tall is PewDiePie?

PewDiePie is the most popular YouTuber of all time, with millions of subscribers, and a net worth that’s beginning to stack up; just like many other social media stars such as Casey Neistat, Logan Paul & Blippi.

As of February 2023, PewDiePie’s net worth is estimated to be $40 Million.

What do you think about PewDiePie’s net worth? Leave a comment below.