I think it’s been said that if Bill Gates were to drop a $50 note on the floor, by the time he picked it up he would have made more than the note’s worth.

Anyway, Gates needs no introduction. We all know he’s a billionaire, founder of Microsoft, and someone to seriously pay attention to if you want to be successful in business.

Bill Gates is also the 2nd richest man in the world, with Bill Gate’s net worth estimated to be almost $90 billion!

We’ve been publishing a lot of quote articles this week, so to keep things rolling, here’s our collection of 28 powerful Bill Gates quotes, not just on becoming wealthy, but being successful and having a successful business.

2. “To win big, you sometimes have to take big risks.” – Bill Gates

3. “Your most unhappy customers are your greatest source of learning.” – Bill Gates 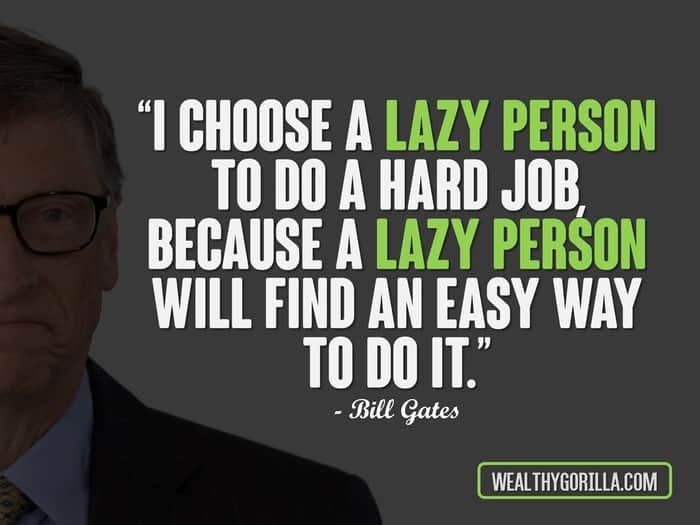 7. “I really had a lot of dreams when I was a kid, and I think a great deal of that grew out of the fact that I had a chance to read a lot.” – Bill Gates

8. “In three years, every product my company makes will be obsolete. The only question is whether we will make them obsolete or somebody else will.” – Bill Gates

9. “Our success has really been based on partnerships from the very beginning.” – Bill Gates

10. “The world won’t care about your self-esteem. The world will expect you to accomplish something BEFORE you feel good about yourself.” – Bill Gates

13. “In this business, by the time you realize you’re in trouble, it’s too late to save yourself. Unless you’re running scared all the time, you’re gone.” – Bill Gates

14. “Success is a lousy teacher. It seduces smart people into thinking they can’t lose.” – Bill Gates

15. “It’s fine to celebrate success, but it is more important to heed the lessons of failure.” – Bill Gates

16. “If I’d had some set idea of a finish line, don’t you think I would have crossed it years ago?” – Bill Gates

17. “As we look ahead into the next century, leaders will be those who empower others.” – Bill Gates

18. “Capitalism is this wonderful thing that motivates people, it causes wonderful inventions to be done. But in this area of diseases of the world at large, it’s really let us down.” – Bill Gates

19. “Before you were born, your parents weren’t as boring as they are now. They got that way from paying your bills, cleaning your clothes and listening to you talk about how cool you thought you are. So before you save the rain forest from the parasites of your parent’s generation, try delousing the closet in your own room.” – Bill Gates

20. “Don’t compare yourself with anyone in this world. If you do so, you are insulting yourself.”– Bill Gates

22. “The world won’t care about your self-esteem. The world will expect you to accomplish something BEFORE you feel good about yourself.” – Bill Gates

23. “If you think your teacher is tough, wait till you get a boss.” – Bill Gates

24. “If you mess up, it’s not your parents’ fault, so don’t whine about your mistakes, learn from them.” – Bill Gates

25. “Your school may have done away with winners and losers, but life HAS NOT. In some schools they have abolished failing grades and they’ll give you as MANY TIMES as you want to get the right answer. This doesn’t bear the slightest resemblance to ANYTHING in real life.” – Bill Gates

27. “I realized about 10 years ago that my wealth has to go back to society. A fortune, the size of which is hard to imagine, is best not passed on to one’s children. It’s not constructive for them.” – Bill Gates

28. “Of my mental cycles, I devote maybe 10% to business thinking. Business isn’t that complicated. I wouldn’t want that on my business card.” – Bill Gates

Thanks for checking out these legendary Bill Gates quotes! Are there any other billionaire’s quote collections we should feature?

Which are your favorite Bill Gates quotes? Leave a comment below.