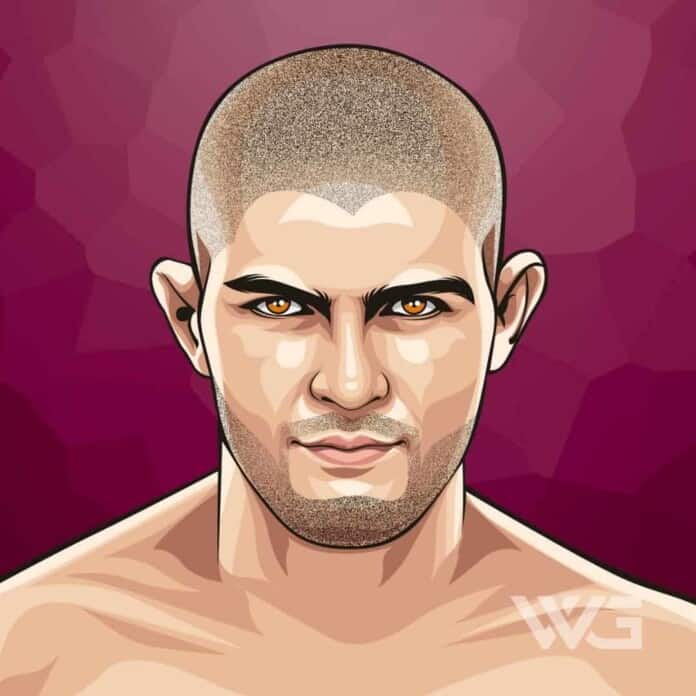 What is Khabib Nurmagomedov’s net worth?

As of February 2023, Khabib Nurmagomedov’s net worth is estimated to be $40 Million.

He is a two-time Combat Sambo World Champion and the reigning undisputed UFC Lightweight Champion. He currently holds the longest undefeated streak in MMA, with 27 wins, and remains undefeated in professional MMA.

Khabib Abdulmanapovich Nurmagomedov was born on the 20th of September, 1988, in Kizilyurtovsky District in Russia. He was the second of three children of Abdulmanap Nurmagomedov, a war veteran, and decorated athlete. He had an older brother named Mogamed and younger sister Amina.

Upon turning 17, his father began training him in combat sambo. Sometime later, his family shifted to Kiev in Ukraine where he continued his training.

Khabib made his MMA debut in 2008. Within a month he secured four wins, of which three were in a day. The following month, he won the inaugural Atrium Cup tournament championship at Moscow. In the three years that followed, he won 12 matches, which also included his win at his M-1 Global debut in 2009.

Between September 2014 and 2015, he had to cancel several matches due to injuries and ill health. He was affected due to knee and other injuries. In 2016, he made a comeback with a win at about against newcomer Darrell Horcher at the UFC.

In 2017, he was scheduled to fight Tony Ferguson for the Interim Lightweight Championship, however, he fell ill due to some complications that arose from the weight cut process and the round had to be canceled.

Nurmagomedov and Edson Barboza faced each other at UFC 219 on December 30, 2017. Nurmagomedov dominated his opponent in all three rounds of the fight and went on to win by unanimous decision, thereby earning his first Performance of the Night bonus.

On October 6, 2018, Nurmagomedov defended his UFC lightweight title against Conor McGregor at UFC 229 by defeating McGregor in the fourth round via submission.

Here are some of the best highlights of Khabib Nurmagedov’s career:

“Beginning of the first round, I have to be careful with him because he has good timing, good boxing. But my wrestling and my pressure – he has to kill me to stop me. I’m gonna stop this guy; I’m going to finish this guy. This is my plan.” – Khabib Nurmagomedov

“You have to punch hard for knockouts, and to beat me, you have to knock me out.” – Khabib Nurmagomedov

“Climb the mountain so you can see the world, not so the world can see you.” – Khabib Nurmagomedov

3 Lessons from Khabib Nurmagedov About Success

Let’s take a look at some of the strongest lessons we can learn from him about success:

1. Trust Has to Be Earned

It takes a long time to earn real trust, but it can be shattered in seconds. Guard the trust people have for you because it is priceless.

2. If You Keep Making the Same Mistake, it’s a Pattern

Figure out why you keep making the same mistake so you can break the cycle.

3. Don’t Let Fear Hold You Back

Fear has held me back from doing many things in my life and it started very early.

How much is Khabib Nurmagomedov worth?

Khabib Nurmagomedov’s net worth is estimated to be $40 Million.

How old is Khabib Nurmagomedov?

Khabib Nurmagomedov was born on September 20, 1988, and is currently 34 years old.

How tall is Khabib Nurmagomedov?

Khabib Abdulmanapovich Nurmagomedov is best known for his record of longest unbeaten record of 27 wins in mixed martial arts (MMA). Currently, he fights in the lightweight division of the Ultimate Fight Championship.

What do you think about Khabib Nurmagedov’s net worth? Leave a comment below.