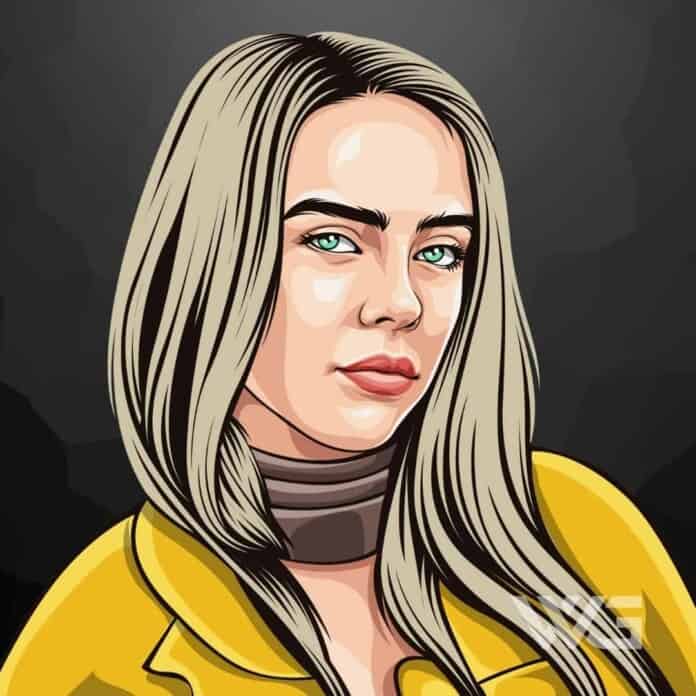 What is Billie Eilish’s net worth?

As of February 2023, Billie Eilish’s net worth is estimated to be roughly $30 Million.

Billie Eilish is an American singer, songwriter, and model from Los Angeles. She gained a following in 2016 when she released her debut single “Ocean Eyes” on audio distribution platform SoundCloud.

Billie Eilish Pirate Baird O’Connell was born on the 18th of December, 2001, in Los Angeles, California. She was born into a family of musicians and actors.

While growing up, she saw her elder brother, Finneas O’Connell, fall in love with music. Additionally, her mother wrote songs and her father played instruments such as the piano and the ukulele.

The song ‘Ocean Eyes’ was recorded in October 2015. It was initially meant for Billie’s dance classes. She handed over the song to her dance teacher and meant it to be featured in her next dance routine.

The song was uploaded on ‘SoundCloud’ in early 2016, and by March, the music video was released. The song shot up and registered more than 10 million hits within a short period of time.

Several major record labels came ahead to buy the rights for the song. The song was released worldwide by ‘Darkroom’ and’ InterScope Records.’ It immediately became a critical and commercial success.

In 2018, she released the singles ‘Bitches Broken Hearts,’ and ‘You Should See me in a Crown.’

How Does Billie Eilish Spend Her Money?

When Billie Eilish released her single “Ocean Eyes” on SoundCloud in 2016, she became famous and got more than 10 million hits.

Born to a family full of actors and musicians, she grew up in California and then started working as a model, songwriter, and singer. She spends a lot of money on jewelry and some of her favorite luxurious brands are Chanel, Gucci, Bvlgari, and Chopard.

She likes layering different kinds of necklaces on top of each other, creating a unique look. This singer’s style is one of a kind when it comes to accessories and her designer watches are some of them.

Some of her favorite luxurious brands are Rado, Cartier, IWC Schaffhausen, and Hermès. It is not your ordinary everyday shopping experience as the minimum price tag for these brands is $8000.

While she travels the world, she visits luxurious vintage shops to look for that unique piece everyone fails to notice. As she travels a lot due to concerts and events, she has a luggage collection, her favorite being Louis Vuitton.

Billie Eilish is definitely known for her hair color choices and it is obvious that she spends a lot of time and money on hair salons.

Here are some of the best highlights of Billie Eilish’s career:

“In the public eye, girls and women with strong perspectives are hated. If you’re a girl with an opinion, people just hate you. There are still people who are afraid of successful women, and that’s so lame.” – Billie Eilish

“I and my brother get along super well. We’re, like, best friends. So we’ll stay up until, like, five just talking because we get along and, you know, it’s cool. And he respects my opinions, and I respect him, even if we don’t have the same opinions, but a lot of the time we do.” – Billie Eilish

“I really wanted to be a model when I was little. I loved photography, and I loved being on camera. But I was short and chubby, so I couldn’t. Anyway, being an artist is way more interesting than just being a model because it’s about you and what you want to be. You’re not being treated like a clothes hanger.” – Billie Eilish

“Bellyache’ is totally fictional. I like writing about things that aren’t real. The song is about not trusting anyone and then putting trust in yourself and realizing that you don’t know what you are doing, either. Or realizing that things you do with a group of people that you think are cool at the moment are ultimately all on you.” – Billie Eilish

“Me and my brother get along super well. We’re, like, best friends. So we’ll stay up until, like, five just talking because we get along and, you know, it’s cool. And he respects my opinions, and I respect him, even if we don’t have the same opinions, but a lot of the time we do.” – Billie Eilish

View our larger collection of the best Billie Eilish quotes!

Now that you know all about Billie Eilish’s net worth, and how she achieved success; let’s take a look at some of the strongest lessons we can learn from her:

Never, never, never give up because bad things do pass. Life ends when you totally give up.

Don’t give up on your own success. Everything is possible.

Those who give, get and those who use will eventually be used. Selfishness is an ugly trait.

How much is Billie Eilish worth?

Billie Eilish’s net worth is estimated to be $30 Million.

How old is Billie Eilish?

How tall is Billie Eilish?

Billie Eilish is best known for her successful debut single, ‘Ocean Eyes.’ Today Billie Eilish is only 17 years old and has already taken the world by storm with her unique style and music.

As of February 2023, Billie Eilish’s net worth is estimated to be roughly $30 Million.

What do you think about Billie Eilish’s net worth? Leave a comment below.