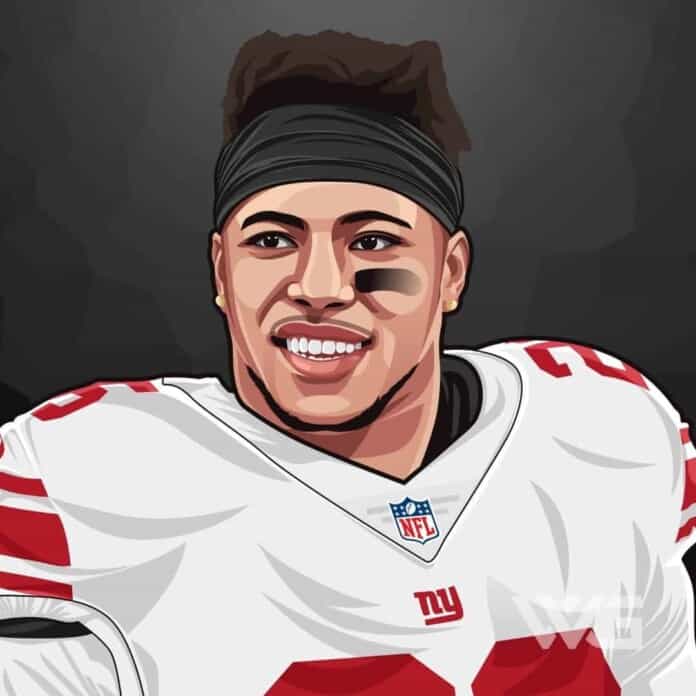 What is Saquon Barkley’s net worth?

Saquon Barkley is an American football running back for the New York Giants of the NFL.

Saquon Rasul Quevis Barkley was born on the 9th of February, 1997, in the Bronx, New York.

He grew up a New York Jets fan idolizing running back Curtis Martin.

Barkley and his family moved to Bethlehem, Pennsylvania, in search of a safer and more suburban environment in his youth. He attended Whitehall High School in Whitehall Township, Pennsylvania.

In 2015, Saquon Barkley joined Penn State University. In his first year, he rushed for 115 yards with the touchdowns in his second game.

Due to his remarkable performance, he was named the Big Ten Offensive Player of the Year. On Dec 3, 2016, he carried 19 times for 83 yards and rushed for one touchdown.

He declared his intention to enter the 2018 NFL Draft on December 31, 2017. He was drafted by the New York Giants as the second overall pick. The running back signed a four-year $31.2 million deal with the giants including a $20.76 million bonus.

Barkley scored his first NFL touchdown during the first week of the 2018 season against the Jacksonville Jaguars. So far his stats reveal 46 rushing attempts, 216 rushing yards, and two rushing touchdowns.

Here are some of the best highlights of Saquon Barkley’s career:

“Sometimes you take it for granted, but to be able to talk to legends and people that you’ve been watching for a very long time, I mean, every day I talk to Eli Manning, you really don’t take the time to cherish and reflect.” – Saquon Barkley

“You got to believe that you’re one of the best, and that’s what I personally believe. But I do have tremendous respect for all the guys out there, especially the Todd Gurley and Le’Veon Bell and the Zekes Ezekiel Elliott of the world, Alvin Kamara, Christian McCaffrey – there’s so many I could list off.’’ – Saquon Barkley

“When I do something and I’m passionate about something I’m going to go 100 percent at it so when you stick me out there I’m capable of doing anything you want a running back to do and I think I can do it at a high level. That’s why I think I’m the best back in the league.” – Saquon Barkley

Now that you know all about Saquon Barkley’s net worth, and how he achieved success; let’s take a look at some of the lessons we can learn from him:

1. There Are No Shortcuts

You have to work hard. There are no shortcuts and there are no easy ways out. You must do what others won’t live like others can’t.

To be able to do good work, one must be in tune with oneself. We must be honest with ourselves and the people around us before we embark on something we wish to become excellent at.

To get where you want to be, is a lot of hard work. This is why many people are unhappy because they want to be somewhere else in life but they are not willing to put in the hard work that is needed to get there.

How much is Saquon Barkley worth?

Saquon Barkley’s net worth is estimated to be $32 Million.

How old is Saquon Barkley?

How tall is Saquon Barkley?

Despite being so young Saquon Barkley has bagged a lot of achievements during his college and professional years. Barkley was selected by the New York Giants in the 2018 NFL draft.

What do you think about Saquon Barkley’s net worth? Leave a comment below.