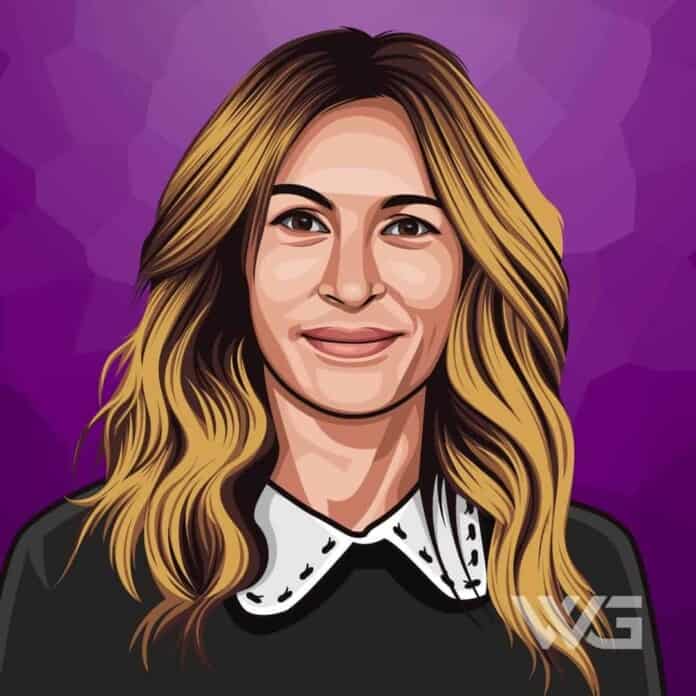 What is Julia Roberts’ net worth?

Julia Roberts is an American actress and producer.

Roberts has won several awards throughout her career, such as three Golden Globe Awards, and has been nominated for four Academy Awards.

Roberts is best known for her performances in movies including ‘Pretty Woman,’ ‘ Sleeping with the Enemy,’ ‘Notting Hill,’ ‘Erin Brockovich’ and ‘Eat Pray Love.’

As of November 2022, Julia Roberts’ net worth is approximately $250 Million.

Julia Roberts was born on the 28th of October, 1967, in Georgia. She has two siblings named Eric Roberts and Lisa Roberts Gillan. She also has a step-sister named Nancy Motes.

In 1972, her parents separated, and she lived with her mother and received education from institutions such as Griffin Middle School and Campbell High School.

Roberts made a television appearance in ‘Crime Story’ in 1987, and the following year, she made her debut on the big screen with the film ‘Satisfaction. The same year she also starred in ‘Mystic Pizza.’

She starred in the movie ‘Steel Magnolias’ in a supporting role, and this role earned her the ‘Golden Globe Award’ in 1989. Her big breakthrough came when she starred in ‘Pretty Woman.’ Her next releases in the 90s movies include ‘Flatliners,’ ‘Hook,’ ‘Dying Young,’ ‘The Player,’ ‘I Love Trouble,’ ‘Michael Collins’ and ‘Notting Hill.’

In 2010, her movies included ‘Valentine’s Day’ and ‘Eat Pray Love.’ The following year, she starred alongside Tom Hanks in the comedy film ‘Larry Tomatoes.’

Some of her recent projects include the documentary series ‘Makers: Women Who Make America’ in 2014, and she had also featured in the ‘Givenchy campaign in 2015.

As of November 2022, Julia Roberts’ net worth is estimated to be roughly $250 Million.

How Does Julia Roberts Spend Her Money?

Julia Roberts is one of the highest-paid actresses in the world.

The actress likes to invest some of her fortunes in real estate, and she owns some incredible properties in the US. She also likes to spend her money on other lavish things such as clothes.

Julia Roberts is a proud owner of a mansion in Malibu that is worth $7 million. She also owns a lavish apartment in New York that is worth a total of $3,8 million.

When Julia Roberts travels, she likes to travel in style. Robert has been spotted several times, flying in a private jet. She loves to go on fancy vacations with her family, which can cost a lot of money.

Roberts likes to be in her best shape and stick like that; she pays a lot of money to have an experienced personal trainer. Her trainer Kathy Kaehler helps her to stay fit. Kaehler has worked with stars such as Kim Kardashian, Drew Berrymore, and many other stars.

Here are some of the best highlights of Julia Roberts career:

“My life at home gives me absolute joy. There are some days when, as soon as you’ve finished cooking breakfast and cleaning up the kitchen, it’s time to start lunch, and by the time you’ve done that, you’re doing dinner and thinking, ‘There has to be a menu we can order from.” – Julia Roberts

“I don’t have the luxury of sitting around anymore. I must have had bags of spare time before I had children, but I don’t know what I did with it, and I didn’t appreciate it. But it’s such a terrific trade-off. I don’t have time to get a pedicure, but I sure am happy. Who cares if your feet look bad?” – Julia Roberts

“During the 80s and 90s, we all became consumed with ourselves. In the 21st century, we’ve come back to simpler times. People are struggling economically, and this has forced them to scale back the material aspects of their lives and realize the beauty of finding the simple joy in being with the people we love.” – Julia Roberts

“My mom used to make everything. She had a great garden and composted and made everything from scratch – peanut butter, bread, jelly, everything. I don’t know how she did it because all those things take time and love and labor. I only do half the stuff she does – but there’s still time.” – Julia Roberts

Now that you know all about Julia Roberts’ net worth and how she achieved success; let’s take a look at some of the lessons we can learn from her:

If you love someone, you say it right then, out loud. Otherwise, the moment passes you by.

You can be true to the character all you want, but you’ve got to go home with yourself.

How much is Julia Roberts worth?

Julia Roberts’ net worth is estimated to be $250 Million.

How old is Julia Roberts?

How tall is Julia Roberts?

Julia Roberts is an acclaimed and popular actress who is well known for her roles in movies such as ‘Pretty Woman,’ ‘Steel Magnolias,’ and ‘Erin Brockovich’.

As a child, she dreamed of becoming an actress, and today she is one of the highest-paid actresses in the industry. She has received several awards and nominations for her performances.

As of November 2022, Julia Roberts’ net worth is approximately $250 Million.

What do you think about Julia Roberts’ net worth? Leave a comment below.