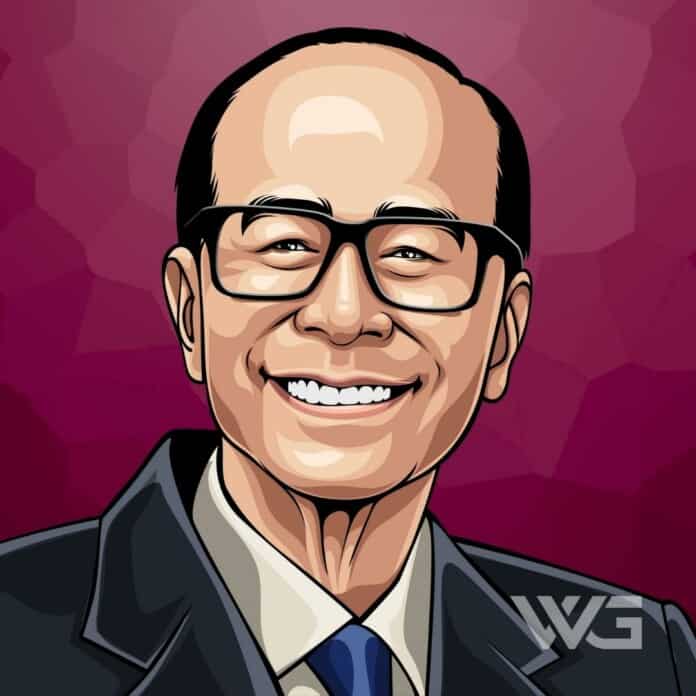 What is Li-Ka Shing’s net worth?

As of December 2022, Li-Ka Shing’s net worth is approximately $31 Billion.

Sir Li Ka-Shing is a Hong Kong business magnate, investor, and philanthropist. Ka-Shing is the 23rd richest person in the world, and he is the senior advisor for CK Hutchison Holdings.

Li Ka-Shing is the world’s leading port investor, operator, and developer of the largest health and beauty retailer in Europe and Asia.

Li Ka-Shing was born in Chaozhou, China on 29th of July 1928. His family was of modest means, and his father headed a local primary school.

Ka-Shing grew up in a period of great political turmoil in China. his family fled to Hong Kong in 1940 after the Japanese invasion of China.

In 1950, Li founded a plastic manufacturing company in Hong Kong with personal savings and funds borrowed from relatives. He read trade publications and business news before deciding to supply the world with high-quality plastic flowers at low prices.

Eight years later, he decided to purchase a site and develop his own factory building. As a result, people fled to Hong Kong.

Li believed the political crisis would. be temporary and property prices would eventually rise, and bought land from the fleeing residents at low prices.

In 1971, he named his real estate ‘Cheung Kong Holdings’. Li stated on a number of occasions his goal of surpassing the Jardines-owned Hongkong Land as a leading developer.

The company became highly successful and in 1984, the company also moved its legal domicile from Hong Kong to another British overseas territory.

As of December 2022, Li-Ka Shing’s net worth is estimated to be roughly $31 Billion.

Here are some of the best highlights of Li Ka-Shing’s career:

“You can believe in Fung Shui if you want, but ultimately people control their own fate. The most important thing is to improve yourself and give it your best. Then many things previously thought to be impossible will become possible.” – Li-Ka Shing

“I was already keeping an eye on the political developments within China, and I also had a firm grasp on economics, industry, management and the latest development and productions of the plastics industry. Not many people in Hong Kong at that time were aware of the potential. It was still quite new.” – Li-Ka Shing

“Doing business may be tough, but I am willing to learn, to innovate, and to work hard, which are the reasons why my business can continue to grow. We focus on our core competencies while looking for new areas for expansion. New businesses sometimes fail, and sometimes succeed. But the ones that succeed can be very profitable. This has been my experience. Setbacks and difficulties are ways to build character.” – Li-Ka Shing

“First of all, I am an optimist. When you study hard and work hard, your knowledge grows, and it gives you confidence. The more you know, the more confidence you gain. When I was 10 years old, I lost my schooling, but I still had plenty of hope to return to school.” – Li-Ka Shing

“Despite my achievements, I can still remember poverty. I told my children and grandchildren that ‘The fruit that you eat will never taste as beautiful as the fruit that I ate during the turmoil of war. You will never cherish it as much as I do.” – Li-Ka Shing

3 Rules for Success in Business from Li-Ka Shing

Now that you know all about Li Ka-Shing’s net worth, and how he achieved success; let’s take a look at some of the lessons we can learn from him:

The more you know, the more prepared you will be when opportunity knocks. If you are lazy and while your time away, you would not know how to take advantage of opportunities even if they stared you in the face, always be prepared.

2. Vision is our greatest strength

Vision is perhaps our greatest strength. It has kept us alive to the power and continuity of thought through the centuries; it makes us peer into the future and lends shape to the unknown.

You must know and understand your business like the back of your hand. Otherwise, your company would be here today, gone tomorrow.

How much is Li-Ka Shing worth?

Li-Ka Shing’s net worth is estimated to be $31 Billion.

How old is Li-Ka Shing?

How tall is Li-Ka Shing?

Li-Ka Shing is the richest man in China, and his company has influenced businessmen and entrepreneurs all over the globe.

As of December 2022, Li-Ka Shing’s net worth is estimated to be roughly $31 Billion.

What do you think about Li-Ka Shing’s net worth? Leave a comment below.