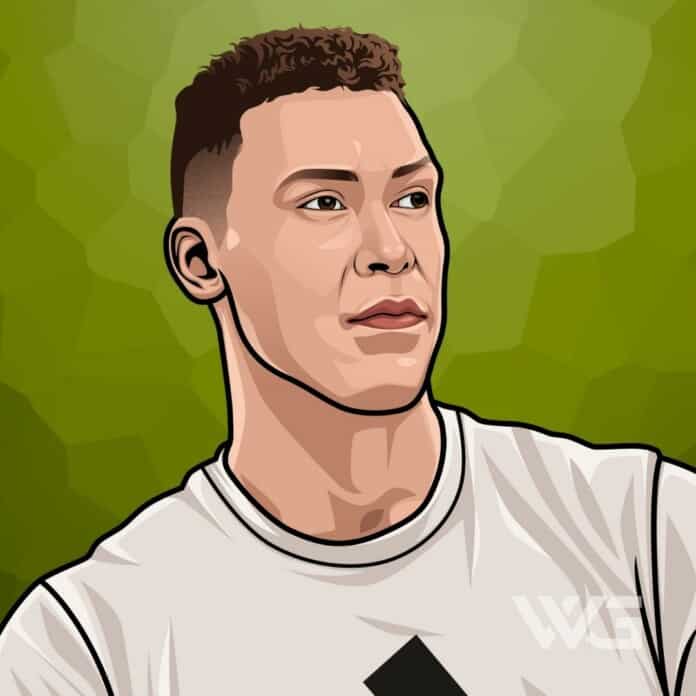 What is Aaron Judge’s net worth?

He plays for the New York Yankees of MLB. Judge was unanimously selected as the American League Rookie of the Year in 2017 and finished second for AL Most Valuable Player.

Judge was adopted the day after he was born by Patty and Wayne Judge, who worked as teachers in Linden, California.

Judge attended Linden High School, where he was a three-sport star. He played as a pitcher and first baseman for the baseball team, a wide receiver for the football team, and as a center for the basketball team.

Aaron Judge was drafted in the first round of the 2013 Major League Baseball draft by the New York Yankees.

He received a signing bonus of $1.8 million. Unfortunately, during a baserunning drill, he suffered an injury and tore a quadriceps femoris muscle, due to which he had to opt-out from playing in the 2013 season.

He made his professional debut in 2014, with the Charleston RiverDogs of the Class A South Atlantic League. He scored a batting average of .333, an on-base percentage of .428, and a slugging percentage of .530.

Judge began the 2015 season with the Trenton Thunder of the Class AA Eastern League. He batted .284 with a .350 OBP and 12 home runs in 63 games for the team. In June, he was promoted to the Scranton/Wilkes-Barre RailRiders of the Class AAA International League.

The 2017 season proved to be the most important one of his career. Judge became the second rookie in the history of the MLB to hit 40 runs in a season. He finished the season with a batting average of .284, 154 hits, and 114 RBIs.

He received the Players Choice Award and the Silver Slugger Award and was voted the American League Rookie of the Year.

Here are the best highlights of Aaron Judge’s career:

“Once DJ hit that two-run homer after battling, a great at-bat by him battling off tough pitches off one of the best closers in the game, that was impressive, and that’s why he’s an MVP. He comes up big in situations like that. And then Altuve, that’s just what he does. He comes up big for them all year and all postseason, and I can’t really describe it.” – Aaron Judge

“The past loss to Boston last year and the year before to Houston, I’m going to be thinking about that all offseason, every single day, and that’s what’s going to fuel me to try to do whatever I can to put our team in a position to win.” – Aaron Judge

“In my early work, my time in the batting cage, that’s serious, and that’s when I feel like I’m really working. That’s where I have to lock in on my approach, make sure my mechanics are right and make sure my mindset is right for the upcoming game.” – Aaron Judge

“When I think about 2017, I feel like it was just another year. It was a whirlwind, but I wouldn’t have wanted it to play out any other way. I’m glad I was in New York. There’s nowhere else I would rather play, and there’s no other group of teammates that I would rather be around.” – Aaron Judge

Now that you know all about Aaron Judge’s net worth and how he achieved success; let’s take at some of his best lessons that we can learn from him:

If the power to do hard work is not a skill, it’s the best possible substitute for it.

Judge’s best thing that’s a passion for me: teaching.

You can never come into the spring feeling like you’ve got a guaranteed spot. Once you do that, you get stagnant, and someone’s going to pass you up.

How much is Aaron Judge worth?

Aaron Judge’s net worth is estimated to be $10 Million.

How old is Aaron Judge?

How tall is Aaron Judge?

He is one of the largest players physically to play in the major leagues. Over the next few years, he proved to be a valuable asset to the team. The awards he has received include the ‘Silver Slugger Award’ and the ‘Players Choice Award.’

As of November 2022, Aaron Judge’s net worth is estimated to be roughly $10 Million.

What do you think about Aaron Judge’s net worth? Leave a comment below.