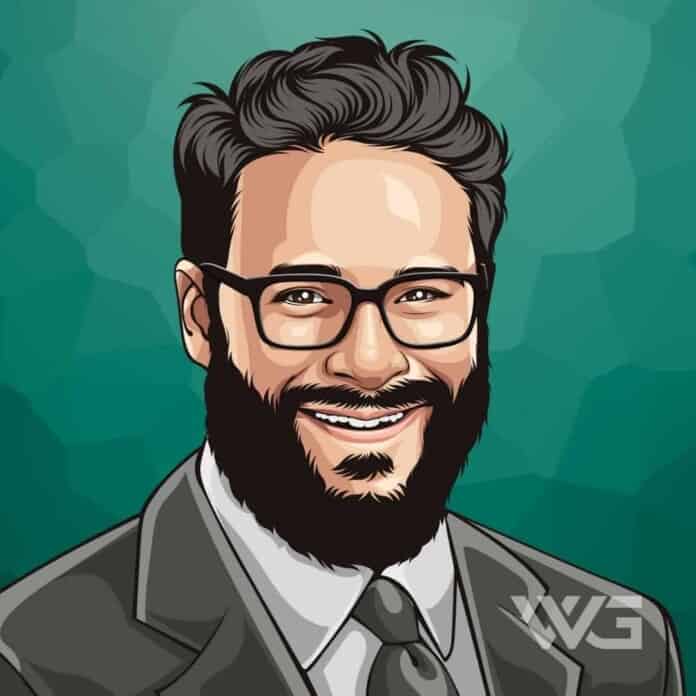 What is Seth Rogen’s net worth?

As of February 2023, Seth Rogen’s net worth is approximately $80 Million.

Seth Rogen is a Canadian actor and director from Vancouver. The actor sent the viewers rolling in laughter with his goofy performance in the film ‘The 40-Year Old Virgin’ and has since then starred in multiple films.

The more he made others laugh, the more he loved it and decided to become a career comedian. Today, Rogen has definitely come a long way from his stand-up comedy days.

Seth Rogen is the son of Sandy Belogus and Mark Rogen. He has one sister, and he went to Vancouver Talmud Torah Elementary School and Point Grey Secondary School. Rogen was interested in comedy already when he was a student.

Rogen was known for being a “funny kid” and enrolled in a comedy workshop taught by Mark Pooley when he was 12 years old. He began performing stand-up comedy when he was a teenager.

Seth Rogen began as an actor when director Judd Apatow recognized his skills. Rogen starred in the television comedy-drama show ‘Freaks and Geeks’ which had its premiere in 1999. He was later offered a part in ‘Undeclared’ and ‘Donnie Darko’ which both received favorable reviews and was a box office hit.

Rogen starred in the romantic comedy ‘The 40-Year Old Virgin’ in 2005 which was a big hit. In ‘Knocked Up’, he played Ben Stone, a slacker who has a one-night stand with a successful working woman which result in a pregnancy. The film received good critics and was a huge hit at the box-office.

He later co-wrote and co-produced the film ‘Superbad’ which was based on a script that he had written as a teenager. The film is known for being a silly comedy but was much loved by the viewers worldwide.

In 2013, Rogen turned to a director when he co-directed the disaster comedy ‘This is the End’. The movie featured a lot of stars such as Emma Watson, Jonah Hill, James Franco, and Seth Rogen himself.

In 2014, Rogen acted in the comedy ‘Bad Neighbors’ alongside Zac Efron, which is counted to be one of Seth Rogen’s biggest hits of all time.

Here are some of the best highlights of Seth Rogen’s career:

For me and my wife…the easiest part of my life is my marriage. Like if everything was as smooth and easy and fun as my relationship with my wife then I would have a much easier time getting through the day. We really get along and we like the same stuff. – Seth Rogen

“I’ve never really had a real job. When I was young doing stand-up, I’d get 50 bucks a week here or 100 bucks a week there. You know, sometimes for headlining one of the rooms, or MC-ing, or something like that. So yeah, I’ve never had like a normal job.” – Seth Rogen

“I knew I just loved comedy, and I think it was my parents who initially brought up the notion of me trying to do stand-up. I think I actually tried writing jokes just at home, just kind of sitting around. But it seemed like a very real way to step into the world of comedy. I felt I could do it, so why not?” – Seth Rogen

“I’m not entirely comfortable saying I’m an actor because it seems like a very weird, almost dorky thing to say you are. I laugh after every take just out of the discomfort I feel that I’m even on film. It’s an awkward thing for me to be doing. Once we get going, it’s always fine, and as we’re shooting, I’m never thinking about it. I’d say that all my time in front of the camera is equally uncomfortable for me.” – Seth Rogen

How much is Seth Rogen worth?

Seth Rogen’s net worth is estimated to be $80 Million.

How old is Seth Rogen?

How tall is Seth Rogen?

Seth Rogen is known as one of the funniest actors of all time. Rogen has alongside actor James Franco been in worldwide movies that have been very popular with the audience. His movies have been viewed all over the world and have been sold everywhere in the world.

As of February 2023, Seth Rogen’s net worth is estimated to be roughly $80 Million.

What do you think about Seth Rogen’s net worth? Leave a comment below.