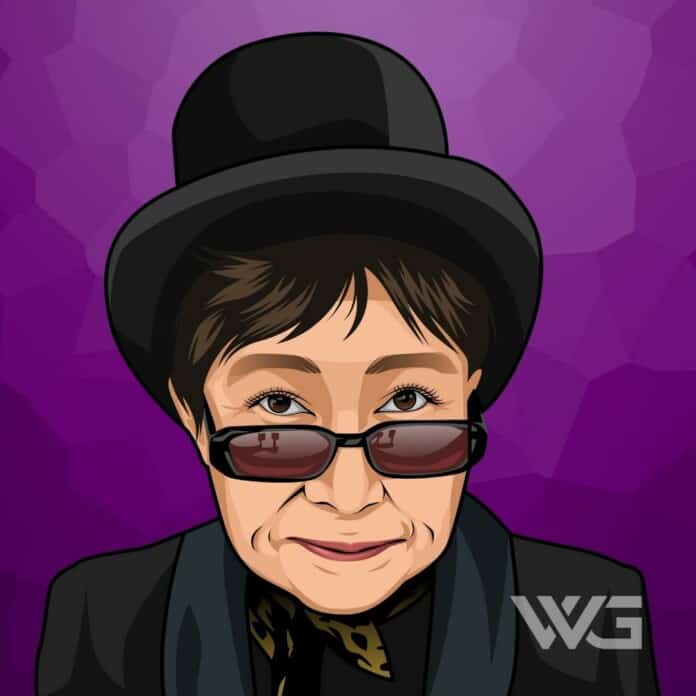 What is Yoko Ono’s net worth?

Her work also encompasses performance art, which she performs in both English and Japanese and filmmaking. She is also known for being married to John Lennon from 1969 until his murder in 1980.

Yoko Ono was born on the 18th of February, 1933, in Tokyo. Ono is the eldest of three children, and she grew up in a wealthy banking family.

Her father was transferred to San Francisco two weeks before her birth and hence, was able to meet her only when the family shifted to the US in 1935.

Ono went to Tokyo to live with her parents after her first marriage failed, where she met American jazz musician and filmmaker Anthony Cox and returned to New York with her new family, to take up performance art.

She performed her first seminal act, ‘Cut Piece’ in Tokyo, which was well-received. She repeated her acts in Manhattan and London, in 1965 and 1966 respectively, which made her a sensation in the art world.

Ono met John Lennon at the preview of her art exhibition in London in 1966, with whom she collaborated on several musical and artistic projects. The duo released their first album ‘Unfinished Music No. 1: Two Virgins’ and an experimental piece ‘Revolution 9’ in ‘The White Album’. ‘

She debuted at Off-Broadway with her musical ‘New York Rock’ in 1994. This was followed by the re-issue of her solo albums on CD by Rykodisc Records in 1997.

During the 2000s, she returned to music, recording various albums, like ‘Blueprint for a Sunrise’, ‘Walking on Thin Ice (Remixes)’, ‘Yes, I’m a Witch’, ‘Between My Head and the Sky’ and ‘Yokokimthurston’, which became top hits.

Here are some of the best highlights of Yoko Ono’s career:

“The human race is a very, very magical race. We have a magic power of witches and wizards. We’re here on this earth to unravel the mystery of this planet. The planet is asking for it.” – Yoko Ono

“Some people say, “Sometimes I have violent thoughts, what can I do?” So I say, “Well, have them!” Cos we should not try to control ourselves. It’s very bad to control ourselves in this sense. If you have any emotion at all, if its a bad emotion or good emotion, think about it, you should just understand that you have those emotions.” – Yoko Ono

“I trust in my inspiration, really, and that’s difficult because sometimes you would rather be technical. And once you empty your mind, empty your brain, it’s really incredible. I’m very caring about things that dash into my brain, and I make sure I don’t just clog it.” – Yoko Ono

“Your thoughts create reality. The most pragmatic way to create world peace is to use your power of visualization. Think Peace, Act Peace, Spread Peace, Imagine Peace. Your thoughts will soon cover the planet. The most important thing is to believe in your power. It works.” – Yoko Ono

“We don’t read people’s wishes. The wishes are supposed to be direct communication to the Universe. Your interception will weaken the power of the wish.” – Yoko Ono

“I just want to be healthy and stay alive and keep my family going and everything and keep my friends going and try to do something so that this world will be peaceful. That is the most ambitious and the most difficult thing, but I’m there trying to do it.” – Yoko Ono

Now that you know all about Yoko Ono’s net worth, and how she achieved success; let’s take a look at some of the lessons we can learn from her:

Imagine your face.  Think of a snail crawling across all those faces. Let the imagined snail trail brighten your complexion.

Who was your first friend? Dial tech support and whisper his or her name until the I.T. person hangs up. Relationships are important for well-being.

Set an egg timer. Do nothing at all. Leave the timer in someone’s mailbox. Make a mental list of unusual colors to wear more often. Send it to your mother.

How much is Yoko Ono worth?

Yoko Ono’s net worth is estimated to be $700 Million.

How old is Yoko Ono?

How tall is Yoko Ono?

Coming from a wealthy and educated background, she chose to make a career in singing and performance art, which brought her both positive and negative publicity.

During her over half-decade career, she gave some hit music albums, which include ‘Yoko Ono/Plastic Ono Band’, ‘Rising’, ‘Wedding Album’, ‘Live Peace in Toronto 1969’, and ‘Double Fantasy’.

What do you think about Yoko Ono’s net worth? Leave a comment below.