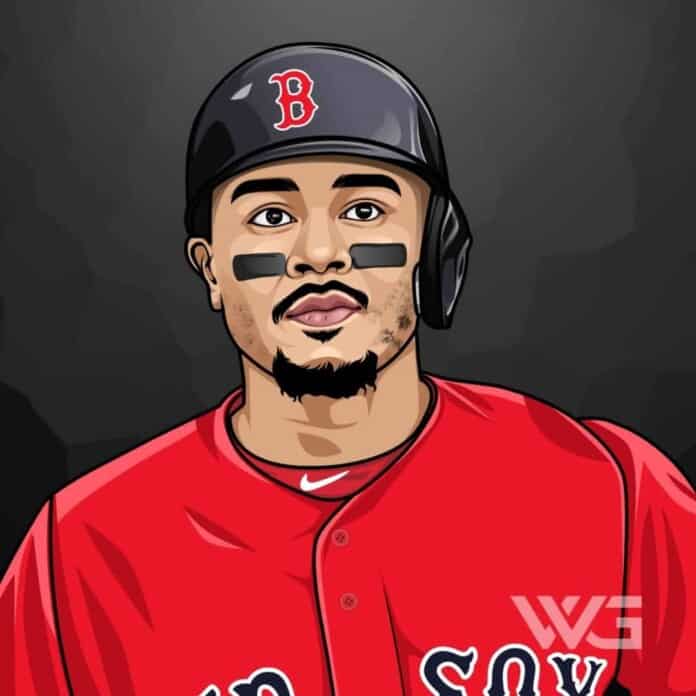 What is Mookie Betts’ net worth?

He plays for the Los Angeles Dodgers of MLB. Betts’ previously played in MLB for the Boston Red Sox.

In 2018, he became the first player in MLB history to win the Most Valuable Player, Silver Slugger, Gold Glove, batting title, and World Series in the same season.

As of December 2022, Mookie Betts’ net worth is approximately $50 Million.

Markus Lynn “Mookie” Betts was born on the 7th of October, 1992, in Nashville.

In 2010, Betts’ junior year at John Overton High School in Nashville, Betts batted .548 with 24 steals. In November that year, Betts signed a letter of commitment to attend the University of Tennessee on a baseball scholarship.

Betts was also a standout basketball player, named MVP of the District 12-AAA league his senior season while averaging 14.1 points, 9 assists, 4 rebounds, and 3 steals per game.

The Boston Red Sox selected Betts in the 5th round of the 2011 Major League Baseball draft with the 172nd overall pick. After protracted negotiations.

Betts subsequently rescinded his commitment to the University of Tennessee, signing a $750,000 contract with the Red Sox organization.

Betts was promoted to the Red Sox in 2014. He had previously been selected for the All-Star Futures Game but was replaced following his promotion to the Major Leagues.

In 2018, Nick Cafardo of The Boston Globe published a column titled, “Mookie Betts or Mike Trout: Who gets the nod?” He compared Betts to Mike Trout, a then-two-time MVP widely considered the best player in baseball.

As of December 2022, Mookie Betts’ net worth is estimated to be roughly $50 Million.

How Does Mookie Betts Spend His Money?

Mookie Betts spends some of his money on his real estate in Los Angeles.

Betts owns a beautiful home in Encino, Los Angeles. It comes with 9 bedrooms and 10 bathrooms. He purchased it for $7.6 million.

Here are the best highlights of Mookie Betts’ career:

“I’m playing for the Red Sox, and I don’t think there’s anybody out there who’s going to hurt you intentionally. So you listen to information, and you kind of filter what you like and take out what you don’t.” – Mookie Betts

“I think when you’re stressing, or worried about your performance, worrying about this and worrying about that, that’s when things start to get tough and you’re not enjoying it anymore, and it becomes a job. Although it is our job to play, still you have to understand that it’s a game and you have to enjoy it.” – Mookie Betts

“She’s always been there for me through anything, I can think of many school projects I had to do, and I would say, ‘Mom, can you help me.’ She would help me write a paper or make a poster. She’s just been that kind of mom. No matter what, she makes sure I’m alright, and I thank her for that.” – Mookie Betts

“I think my senior year in high school was when I started wearing Jordans. Our team rule that we had to play in them, so that’s when I got – not introduced to them, but got into it. Through the minors, I started collecting some, to wear, and that’s when I told myself I want to become a Jordan athlete and did all I could to do it.” – Mookie Betts

“I want to be a great role model to let the kids, especially black kids, that it’s possible to make it in this sport. I think we, as a black community, quit playing the game because we think it’s a white man’s sport. Or we think that since other black people don’t play it, so why should I play it.” – Mookie Betts

Now that you know all about Mookie Betts’ net worth, and how he achieved success; let’s take a look at one of the best lessons that we can learn from him:

1. Life Has To Be Understood

Nothing in life is to be feared, it is only to be understood. Now is the time to understand more, so that we may fear less.¨

Smile and be happy every day.

Life is short. Enjoy it while it lasts.

How much is Mookie Betts worth?

Mookie Betts’ net worth is estimated to be $50 Million.

How old is Mookie Betts?

How tall is Mookie Betts?

Mookie Betts is an American professional baseball player who was drafted by the Boston Red Sox in the fifth round of the 2011 Major League Baseball Draft. Betts is a 3-time Silver Slugger Award winner.

As of December 2022, Mookie Betts’ net worth is estimated to be roughly $50 Million.

What do you think about Mookie Betts’ net worth? Leave a comment below.