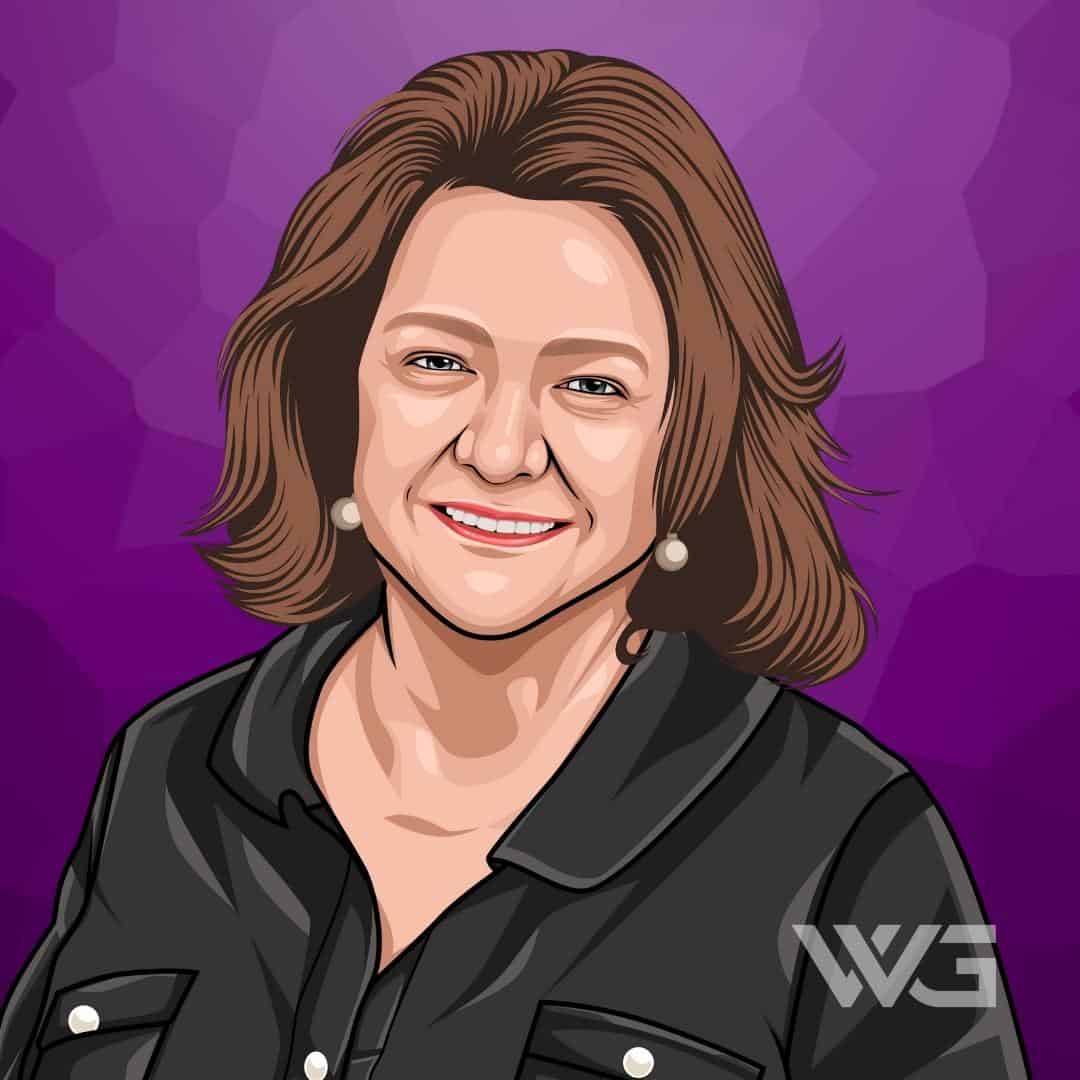 What is Gina Rinehart’s net worth?

Gina Rinehart is the heiress to the Hancock Prospecting Group fortune.

The company was founded by Gina’s father, Lang Hancock, whom she worked alongside from an early age, to learn the ins and outs of the business.

She is the executive chairwoman of her father’s company and Australia’s richest citizen.

She has succeeded in expanding the company since taking over, with her biggest break coming from the iron ore boom in the early 2000s.

As of November 2022, Gina Rinehart’s net worth is estimated to be $31 Billion.

Georgina Hope Rinehart was born on 9 February 1954, in Perth, Australia.

She was the only child of Lang Hancock and her mother, Hope Margaret Nicholas. Gina grew up on a sheep and cattle ranch until the age of 8, before attending primary school.

She became a boarder at St. Hilda’s Anglican School for Girls in Perth, attending there until she completed her schooling.

Gina then went on to study economics at the University of Sydney before dropping out to start working with her father.

She gained a considerable amount of knowledge about the business during this time, which was to stand her in good stead for the challenges she faced after her father’s death.

In March 1992, Gina’s father passed away, leaving a virtually bankrupt company for her to manage.

Not only did she become the Executive Chairman of Hancock Prospecting, but also the HPPL Group of companies. She applied for the Roy Holl Tenements five months after her father’s passing, and this became one of her company’s biggest assets.

She obtained Roy Holl Tenements in 1993 and focused completely on developing them and Hancock Prospecting. By raising capital through joint partnerships, she turned the leases into huge revenue-producing mines.

Since obtaining Roy Hill, Hancock Prospecting currently owns 50% of Hope Downs, giving it a 50% share of the profits made by the mine. Hope Downs mine is operated by Rio Tinto and produces 30 million tonnes of iron ore each year.

Since taking over, Gina has invested in copper, iron ore, gold, and coal as well as cattle and property. Taking her business ideas to the next level, she obtained a 10% stake in Ten Network Holdings in 2010.

Later that year, she also purchased a stake in Fairfax Media and two years later became its biggest stakeholder.

In 2015, she managed to obtain Fossil Downs, a huge cattle station and pastoral lease.

By 2012, Gina was being referred to as the richest woman in the world as a result of the growth of her companies. Despite her business success, she kept a low profile, avoiding the media.

In 2015, Gina announced the grand opening of one of Roy Hill’s largest mines, only 8 months after securing funding worth $7.9 billion. The next year, Hancock Prospecting made a deal to invest in the Sirius Minerals mining company.

Gina’s wealth has increased substantially, due to the iron ore-fuelled mining boom in the last decade. This resulted in the company becoming one of the largest privately owned businesses in Australia.

Starting with a heavily indebted business, Gina has managed to negotiate some of the most profitable deals in the mining industry to the benefit of her company.

Due to the secrecy surrounding her business dealings, it is believed that Gina Rinehart earns a salary of over $7 billion annually, but the exact figures are not publicly available.

With the ongoing shortage of raw materials needed to drive the world economy and the various threats to peace in parts of the world, Australia is perfectly placed to benefit from increasing commodity prices.

Gina Reinhart is at the forefront of mining and is therefore well-positioned to make huge profits for the foreseeable future.

Gina Rinehart has managed to create a massive business empire on the back of the huge increase in commodity prices over the past decade.

It is estimated that Rinehart now has a total net worth of over $31 billion.

Here’s a breakdown of Gina Rinehart’s annual net worth:

With her business acumen and negotiating skills, we fully expect Reinhart to add massive wealth to her company and personal portfolios in the decades ahead.

In 1973, Gina married Greg Milton and had two children, John Langley and Bianca Hope, before divorcing in 1981.

She was married a second time to Frank Rinehart, who worked as a German-American corporate lawyer. The couple had two children, Hope and Gina, before Frank passed away in 1990.

Gina’s four children have a strained relationship with their wealthy mother, and unfortunately, Gina hasn’t had the best of relationships with her son John.

Gina only attended her two younger daughters’ weddings due to the bad relationship between her and her elder children.

You can find out more about Gina from her official website, where she reveals her latest books, speeches, and photographs.

Gina Reinhart proved early on that she knew what she was doing with her father’s business. The awards she’s won and the high regard in which she is held by the business community are proof that she is a more-than-suitable successor to her father’s legacy.

Here are some of the more memorable moments from Gina Rinehart’s career:

With Gina showing no signs of slowing down, we’re sure that she will be winning many more accolades as she continues her successful career.

How Does Gina Rinehart Spend Her Money?

Gina loves cattle and purchased Fossil Downs, a ranch that stocks 15,000 cattle, for an estimated $25 to $30 million.

Even though Gina prefers to keep a low profile, her philanthropy work isn’t something to sneeze at. She is on the expert advisory board of SISHE, an organization against human trafficking and a major supporter of girl orphanages all over Cambodia.

She resides in luxury homes in various Australian cities and some of the most expensive cars in the world grace her garages.

And to top it all, she maintains one of the most expensive private jets in the world on standby, to take her anywhere in Australia or the world, at a moment’s notice.

Gina Reinhart took a broken company and turned it around. In the process, she earned the respect of both the business community and the nation.

Here are some of the best highlights of Gina Rinehart’s career:

With her focus on pressing social and business issues, Gina is sure to pull off some exciting deals in the years ahead.

Gina Rinehart was groomed from an early age to take over the company from her father. Her aptitude for business and negotiating skills have seen the company grow from a near-bankrupt entity to the powerhouse it is today.

Here are our favorite quotes from Gina Rinehart:

Contrary to popular opinion, Gina was not gifted a fortune. It was her skill and tenacity that turned her father’s company around and built it into a formidable player in international markets.

Now that you know all about Gina Rinehart’s net worth, here are some of the best success lessons to learn from Gina Rinehart:

1. Work Hard To Achieve Your Dream

Gina may have been given a business, but she was the one who had to make it work. She believes that it is only through hard, focused effort, that one can achieve one’s desired outcome.

Gina always believed that the less time you spend wasting your life away on things that don’t matter, the more time you have to focus on what really counts. The results of this philosophy are plain for all to see in her business successes.

3. There Is Always Room For Improvement

Even though Gina Rinehart achieved impressive results with her company and created immense wealth, she’s never satisfied. By continuing to venture into new businesses, she’s looking for the next big idea to help expand her empire.

Gina’s business acumen and ability to build a business is a truly impressive achievement. She provides a role model for women everywhere to look up to and shows that no matter your gender, you can still achieve magnificent dreams.

She has been described as an Australian patriot and continues to inspire people wherever she goes.

Through hard work and sacrifice, Gina is a self-made woman who has increased her wealth to a level that competes with the richest people on the planet.

As of November 2022, Gina Rinehart’s net worth is estimated to be $31 Billion.

What do you think about Gina Rinehart’s net worth? Leave a comment below.