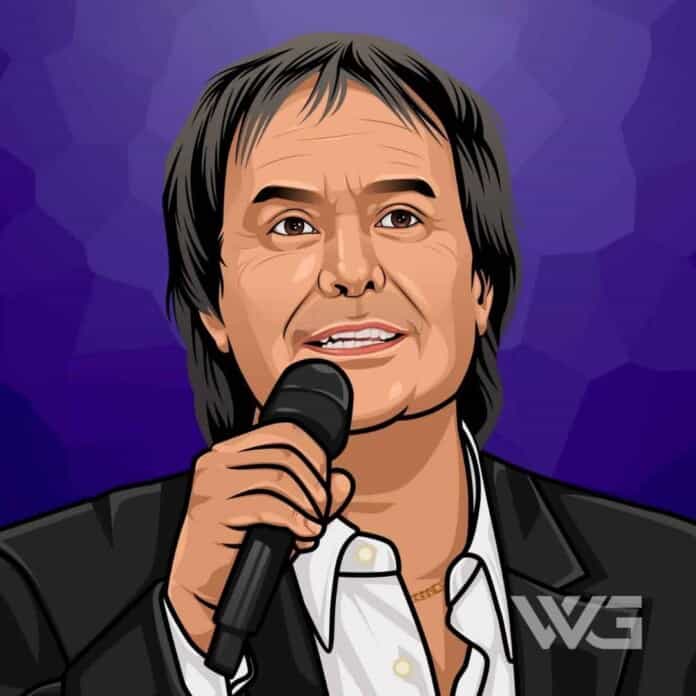 What is Chris de Burgh’s net worth?

Chris de Burgh is a British-Irish singer and songwriter.

Burgh has had many top 40 hits in the UK and two in the US, but he is more popular in other countries, particularly Norway and Brazil. He rose to fame in 1986 with his hit song ‘The Lady in Red’.

He has sold over 45 million albums worldwide.

As of December 2022, Chris de Burgh’s net worth is estimated to be roughly $50 Million.

Christopher John Davison was born on the 15th of October, in 1948.

De Burgh is the son of Charles John Davison and Maeve Emily. His maternal grandfather was Sir Eric de Burgh, a British Army officer who had been Chief of the General Staff in India during the Second World War.

De Burgh took his mother’s maiden name, “de Burgh,” as a stage name when he began performing, while his legal surname remains “Davison.” His father had substantial farming interests, and Chris spent much of his early years in Malta, Nigeria, and Zaire.

De Burgh took his mother’s name when he started performing. graduated from Trinity College, Dublin with a Master of Arts. In 1974 he signed his first contract with A&M Records.

He supported Supertramp for their Crime of the Century tour. His debut album ‘Far Beyond These Castle Walls’ was released in 1975.

All of his albums in the 1970s did not make the charts in the U.S. or UK but did better in European and South American nations. In 1982, he released his album ‘The Getaway,’ which made it on the 30th spot in the UK and the 42nd spot in the U.S.

His album ‘Man on the Line’ was very successful. In 1986, Burgh had his biggest hit with ‘The Lady in Red.’ The album ‘Into the Light’ made it to the second spot in the UK.

De Burgh has released 20 studio albums. He started his own label called Ferryman Productions. Bottles from his wine cellar sold for over $500,000 in 2011.

As of December 2022, Chris de BUugh’s net worth is estimated to be roughly $50 Million.

Here are some of the best highlights of Chris de Burgh’s career:

“My secondary schooling was at Marlborough College, Wiltshire, so I’m fond of that part of the world. It’s quintessentially English, with village greens, pubs, and cricket pitches, and resonates strongly with me.” – Chris de Burgh

“I remember years ago hearing a top band talking about a song of theirs that was a monster hit, and they were really dissing it, saying that they hoped they’d never have to play it again. I thought: ‘That’s not right. If people love a song, play it.” – Chris de Burgh

“In my 20s, I got into giving people massages and realised I was able to encourage their bodies to heal, bypassing my hands over them. I’d never described myself as a faith healer – it’s just that if someone believes in this type of healing, I can help release whatever blockage it is that’s preventing them healing themselves.” – Chris de Burgh

“Canada was one of the first countries that took an interest in my career. Apart from a freak hit I had in South America, Canadians took my ‘Spanish Train’ album to heart and have stuck with me ever since. They’ve been very loyal, and it’s been a long and rewarding affair.” – Chris de Burgh

“My father fought behind Japanese lines in the second world war, and it traumatized him. Everybody who knew him from before said he was the life and soul of the party – fun to be with – but after the war, he was different.” – Chris de Burgh

“I met someone in the West Indies who was not able to walk. Put my hands on him, and he was able to get up. I know the tabloids will get excited by this, so I try to play it down.” – Chris de Burgh

Now that you know all about Chris de Burgh’s net worth and how he achieved success; let’s take a look at some of the lessons we can learn from him:

Philanthropy is never understood by those who don’t have it in their own hearts.

When you’re a solo artist, and you’re not doing well, it can be pretty tough. So when success does come, it feels like you’ve earned it.

Being hydrated is a key thing for a singer, especially if you’re spending three hours on stage five nights a week, and wine dehydrates me faster than beer.

How much is Chris de Burgh worth?

Chris de Burgh’s net worth is estimated to be $50 Million.

How old is Chris de Burgh?

How tall is Chris de Burgh?

Chris de Burgh is a British-Irish singer-songwriter who was born in Venado Tuerto, Argentina.

De Burgh is best known for his hit song ‘The Lady in Red,’ which he released in 1986.

As of December 2022, Chris de Burgh’s net worth is estimated to be roughly $50 Million.

What do you think about Chris de Burgh’s net worth? Leave a comment below.

What is Cedric Gervais' net worth? Introduction  As of ,...