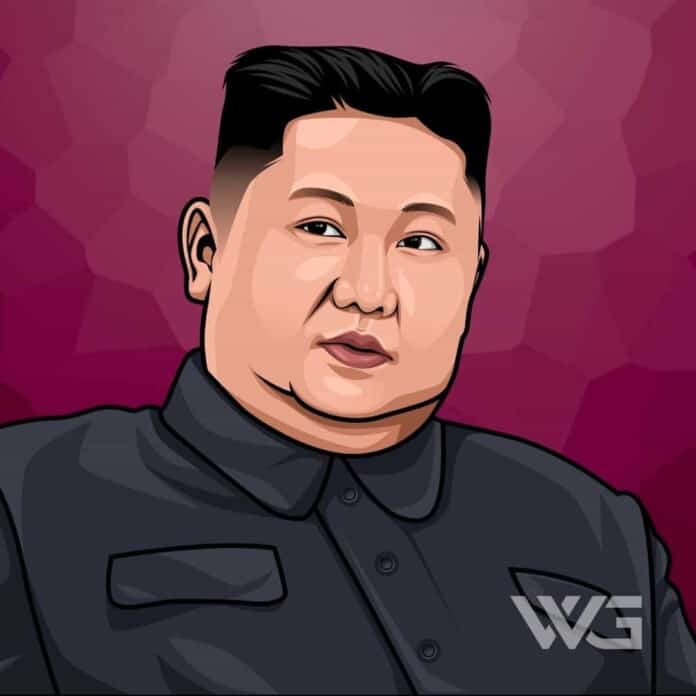 What is Kim Jong-Un’s net worth?

Many details of Kim Jong-Un’s childhood are unknown, even his exact date of birth. Kim is North Korea’s current Supreme Leader and was appointed to this role following the death of his father. Forbes magazine ranked Kim as the 46th most powerful person in the world in 2013.

Jong-Un has been in the news often for his internet feud with Donald Trump. There was also a huge rumor spreading like wildfire that Jong-Un was dead. Many people believe he might have pretended to be dead to see how people would react.

It is believed that Kim was born on January 8th, 1982 in North Korea, the third son of Kim Jong-il. Kim reportedly attended school in Switzerland from 1993 to 2000.

These reports have not been verified, as he attended under a pseudonym. Upon return to North Korea, he attended Kim Il-sung University, which is a leading officer-training school.

Kim Jong-un began his political career in 2011 by having many of his father’s top executives removed or executed, including his uncle who was executed.

It is reported that his uncle, Jang Song-thaek, was executed for being a traitor and plotting to overthrow the government. Kim’s older half-brother, Kim Jong-Nam, was also executed in a Malaysian airport in 2017.

Kim has been attempting to mend relations with South Korea, most recently by sending delegates to participate in the Olympics.

Kim’s younger sister attended the Games and had dinner with the South Korean president; making her the first member of North Korea’s ruling family to visit South Korea.

Despite Kim’s vow to focus on rebuilding the educational, agricultural and economic reforms for the country; South Korea is still asserting human right’s violations by North Korea. The claims come from the executions of dozens of officials.

“When young people are powerful, our Party and People’s Army are powerful, and there is nothing for us to be afraid of.” – Kim Jong-Un

“The days are gone forever when our enemies could blackmail us with nuclear bombs.” – Kim Jong-Un

“Our young people are patriots and heroes of whom we can be proud of before the world; that they have a large contingent of such trustworthy young people is a great blessing for the Workers’ Party of Korea. And a source of pride for Korea, and this assures the great strength of our dignified state and its bright future.” – Kim Jong-Un

“When young people are powerful, our Party and People’s Army are powerful, and there is nothing for us to be afraid of.” – Kim Jong-Un

“Nothing will be beyond our reach when we make the flames of creating positive deeds flare up across the country with the virtues of the young vanguard as the initial spark and bring into full play the mounting vigor of the millions of young people.” – Kim Jong-Un

How much is Kim Jong-Un worth?

Kim Jong-Un’s net worth is estimated to be $5 Billion.

How old is Kim Jong-Un?

How tall is Kim Jong-Un?

Although much is not known about the current leader of North Korea; he is ruling the country in much the same way his father and grandfather has. North Korea is kept in a dictatorship, with the leader being head of both military and government.

Kim is keeping the country shrouded in mystery and will continue to build his dictatorship.

What do you think about Kim Jong-Un’s net worth? Leave a comment below.