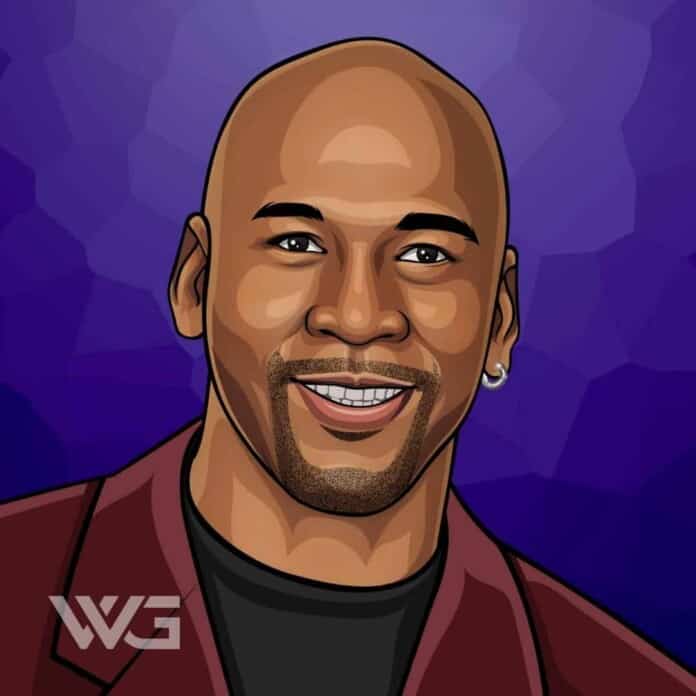 What is Michael Jordan’s net worth?

Michael Jordan is one of the most recognized names in NBA history. He is also known for the endorsement of Nike’s Air Jordan and for the movie Space Jam.

Jordan has become known as the most outstanding North American athlete of the 20th century by ESPN. He is now part-owner and head of basketball operations for the Charlotte Bobcats.

Michael Jordan was born on February 17, 1963, in Brooklyn, New York. His family moved to Wilmington, North Carolina, when he was a toddler. He was the fourth of five children, with two older brothers, one older sister, and a younger sister.

As a sophomore in high school, he did not make his basketball team due to his height. He focused on other sports that year, such as baseball and football.

Jordan was first drafted by the NBA team Chicago Bulls in 1984, and in his first season, he helped the team make the playoffs.

He scored an average of 28.2 points per game that season, which led to his NBA Rookie of the Year Award. In the 1986-1987 season, he became the first player in years to score more than 3.000 points in a single season.

Over the next few years, Jordan helped the Bulls win championship after championship. He took a break from the 1993-1994 season for a stint in minor league baseball but returned to the Chicago Bulls in 1995. Upon his return, he came back stronger, averaging 30.4 points that season.

In 1998 Jordan retired after playing fifteen seasons and winning six championships with Chicago Bulls and joined the Washington Wizards as part-owner, returning for the final two seasons from 2001 to 2003.

To this day, Michale Jordan is regarded as an NBA legend and the greatest basketball player in the history of this sport. Former NBA star had a significant role to play in popularizing the NBA around the globe in the 1980s and 1990s.

Jordan is also known as one of the most effectively marketed athletes in the world, with many lucrative endorsement deals. He was responsible for the immense success of Nike’s Jordan brand, which includes the popular to this day Air Jordan sneakers. It’s the Nike royalties that amount to 5% on every Air Jordan shoe sold that heavily contributed to Michael Jordan’s net worth.

Over the years, NBA legend Michael Jordan had many successful endorsements, including such brands as Coca-Cola, McDonald’s, Chevrolet, Upper Deck, and Hanes.

The basketball player was also a star of the “Space-Jam” hit movie, where he played himself. In 2000, the IMAX documentary about Jordan’s career in Bulls came out, with a big emphasis on the 1998 NBA playoffs, titled “Michael Jordan to the Max.” Jordan had more recent successes in the film industry, for example, with his documentary miniseries The Last Dance (2020).

In 2006 Jordan bought a majority of the stake in the Charlotte Bobcats (now named Hornets) and joined as its managing member. His priority is to improve the team’s stats, and he does not anticipate leaving the basketball business.

Jordan’s post-basketball career outside of the court includes 23XI Racing – a professional auto racing organization that is owned by Jordan, as well as Denny Hamlin. In their NASCAR team, they selected Bubba Wallace as their driver.

It’s worth mentioning that Jordan has also been an active philanthropist. From 2001 to 2014, he hosted the annual golf tournament, the Michael Jordan Celebrity Invitational, which raised funds for various charitable causes.

In 2006 Jordan and his wife pledged $5 million to Chicago’s Hales Franciscan High School. The Jordan Brand also made some considerable donations to Habitat for Humanity, as well as Louisiana’s Boys & Girls Clubs of America.

Jordan’s activity in The Make-A-Wish Foundation is also a noticeable one. Jordan was named Chief Wish Ambassador in 2008. In 2013 he granted his 200th wish. Up until now, he raised more than $5 million for the foundation.

It’s easy to see how Michael Jordan is one of the highest-paid athletes and NBA players to this day. In June 2014, Jordan was named the first NBA player to become a billionaire after he increased his shares in Charlotte Hornets. Forbes estimated that Jordan Brand generates around $1 billion of profits for Nike each year.

In 2021 Forbes estimated that Michael Jordan’s net worth rose to $1.6 billion. This makes Famer Michael Jordan one of the wealthiest African-Americans in the US. And he’s one of the most beloved ones too.

His popularity spreads from the strong presence of Nike’s Jordan Brand on the market through popular Internet meme, ending on still very much iconic basketball career that landed him a place in the NBA’s Hall of Fame.

As of February 2023, Michael Jordan is one of the richest athletes in the world, with a net worth of $2.2 Billion.

Here are some of the best highlights of Michael Jordan’s career:

“I can accept failure, everyone fails at something. But I can’t accept not trying.” – Michael Jordan

“Obstacles don’t have to stop you. If you run into a wall, don’t turn around and give up. Figure out how to climb it, go through it, or work around it.” – Michael Jordan

“One day, you might look up and see me playing the game at 50. Don’t laugh. Never say never, because limits, like fears, are often just an illusion.” – Michael Jordan

“You have to expect things of yourself before you can do them.” – Michael Jordan

“I’ve always believed that if you put in the work, the results will come.” – Michael Jordan

View our larger collection of the best Michael Jordan quotes!

How much is Michael Jordan worth?

Michael Jordan’s net worth is estimated to be $2.2 Billion.

How old is Michael Jordan?

How tall is Michael Jordan?

Michael Jordan’s ambition to succeed and determination to help others has kept in him the game for years.

He is a recognizable face in sports, as well as in marketing for products such as Nike’s Air Jordans. His drive and passion for basketball have led to his large net worth and have inspired many other players, and his philanthropy helped thousands of kids across the US achieve their goals and dreams.

What do you think about Michael Jordan’s net worth? Leave a comment below.

Are you curious about your favorite celebrity’s net worth? If so, check our other articles, like:

Robert Covington is a National Basketball Association forward for the Los Angeles Clippers who made $46 million during his four years with the Philadelphia 76ers.