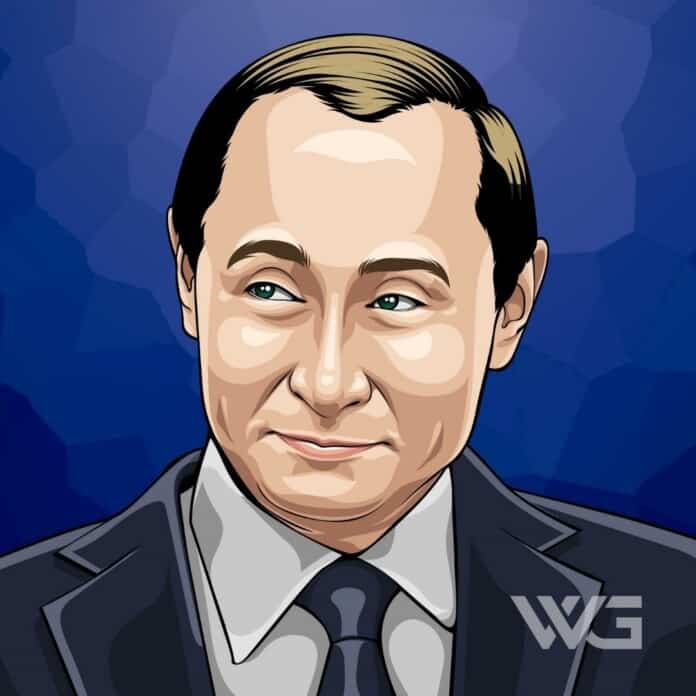 As of February 2023, Vladimir Putin’s net worth is estimated to be $70 Billion.

Vladimir Putin is the current president of Russia and is on his fourth term in the position. Putin has gained recent national attention due to his controversial relationship with President Trump, and the human rights violations against the LGBT community in Russia.

Putin’s political career began early in the 1990’s, and his popularity has continued to grow.

Vladimir Vladimirovich Putin was born on the 7th October 1952 in Leningrad, Russia, and is the youngest of three in the family.

His two brothers died before he was born; one in infancy, and the other of diphtheria. His mother was a factory worker, and his father was injured in the war.

Putin was interested in the Soviet cinema and wanted to portray the intelligence officers, that were often in those movies. He took up sambo and judo and became a black belt in Judo. Vladimir also studied German in high school and is now able to speak it fluently.

After high school, Putin studied Law at the Leningrad State University, from which he graduated in 1975. Following law school, Putin joined the KGB and worked in counter-intelligence, and then served undercover in Germany until 1990.

He resigned from the KGB with the rank of Lieutenant Colonel in 1991.

Putin’s political career began in 1990 when he was appointed as an advisor of international affairs to the Mayor of Leningrad. Putin moved through various roles in the government, including a stint as deputy chief of Presidential Staff.

In 1999 Putin was appointed acting Prime Minister of the Government of the Russian Federation, and Putin agreed to run for the presidency. He was not officially affiliated with any political party but pledged support to the Union party.

During his second term, the National Priority Projects began as an effort to improve Russia’s health care, education, housing, and agriculture.

2008 saw the second premiership for Putin, as he was not allowed to run for a third term due to the Constitution. However, in 2012 he was appointed President for a third term and is currently in his fourth term.

Russia has seen several changes in Putin’s time in control; such as a reorganization of the electoral districts, the annexation of Crimea, and a military reform.

Here are some of the best highlights of Vladimir Putin’s career:

“Terrorism has no nationality or religion.” – Vladimir Putin

“The centuries-old history and culture of India, majestic architectural monuments and museums of Delhi, Agra and Mumbai have a unique attractive force.” – Vladimir Putin

“Everything will probably never be OK. But we have to try for it.” – Vladimir Putin

“The ability to compromise is not a diplomatic politeness toward a partner but rather taking into account and respecting your partner’s legitimate interests.” – Vladimir Putin

“We don’t need a weakened government but a strong government that would take responsibility for the rights of the individual and care for the society as a whole.” – Vladimir Putin

“We shall fight against them, throw them in prisons and destroy them.” – Vladimir Putin

“The path towards a free society has not been simple. There are tragic and glorious pages in our history.” – Vladimir Putin

How much is Vladimir Putin worth?

Vladimir Putin’s net worth is estimated to be $70 Billion.

How old is Vladimir Putin?

How tall is Vladimir Putin?

Vladimir Putin has been serving his country in multiple ways since his graduation from law school, beginning with service in the KGB. He is currently on his fourth term as President and has implemented several significant changes to the country.

Vladimir Putin’s net worth is over $70 Billion and is reflective of his lengthy political career.

What do you think about Vladimir Putin’s net worth? Leave a comment below.

Charles Oliveira is one of the best submission artists in mixed martial arts history, and the Brazilian has multiple championships and millions of dollars because of his skills.