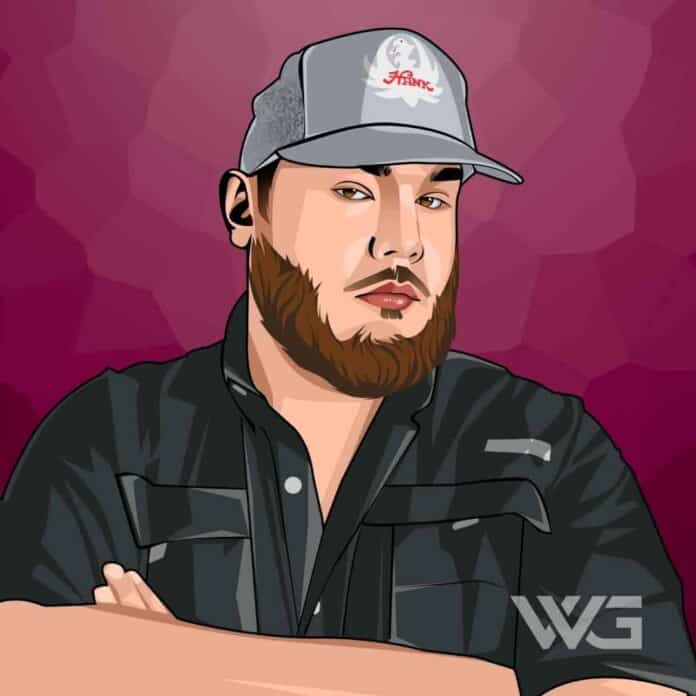 What is Luke Combs’ net worth?

Luke Combs is an American country music singer and songwriter.

Combs has released two albums for Columbia Nashville, which have combined to produce seven singles, all of which reached number one on Billboard’s Country Airplay chart.

Luke Albert Combs was born on the 2nd of March, 1990, in Charlotte, North Carolina.

At the age of eight, he moved to Asheville, North Carolina, along with his parents.

While studying at ‘A. C. Reynolds High School’ in Asheville, he performed with various vocal groups and also landed an opportunity to perform solo at the famous ‘Carnegie Hall’ in Manhattan, New York City.

Later that year, he released his second EP ‘Can I Get an Outlaw.’ Combs’ popularity increased in 2015 when his debut single ‘Hurricane’ peaked at number 46 on Billboard’s ‘Hot Country Songs’ chart.

The following year, Combs was nominated at the prestigious ‘Grammy Awards’ for the ‘Best New Artist’ award.

In the same year, he also received a nomination for the ‘Video of the Year’ award at ‘CMT Music Awards’ and won the ‘CMT Performance of the Year’ award which he shared with popular singer-songwriter and record producer Leon Bridges.

Here are some of the best highlights of Luke Combs’ career:

“I don’t want to put myself in any kind of a box as far as my sound goes, because being an artist is fluid. If you look at a painter’s work, a lot of times, it’s similar in style, but other times – over even a year’s period – it can change so much. I’m just going with the flow.” – Luke Combs

“It’s been cool to watch the fans who’ve kind of always been there for me. That’s just a special feeling every night: to go out and know that there are people that are proud, not just to be at the show but proud to be your fan, and they’re invested in what you’re doing.” – Luke Combs

“My tour manager, I met him at Boot Barn. He was selling me a pair of boots… and he said, ‘I moved to Nashville to be a tour manager, and I need work right now,’ and I said, ‘Man, I don’t even have a tour manager. So you can tour-manage me.” – Luke Combs

Now that you know all about Luke Combs’ net worth, and how he achieved success; let’s take a look at some of the strongest lessons we can learn from him:

Believe you can and you’re halfway there.

Start by doing what’s necessary; then do what’s possible, and suddenly you are doing the impossible.

You must do the things you think you cannot do.

How much is Luke Combs worth?

Luke Combs’ net worth is estimated to be $5 Million.

How old is Luke Combs?

How tall is Luke Combs?

Luke Combs is an American singer-songwriter, best known for his debut studio album, ‘This One’s for You,’ which was released through ‘Columbia Nashville’ on June 2, 2017.

Combs has won multiple awards and nominations for his work throughout his career.

What do you think about Luke Combs’ net worth? Leave a comment below.

Terry Taylor joined the NBA in 2021 and has since earned millions as a power forward playing for Indiana.