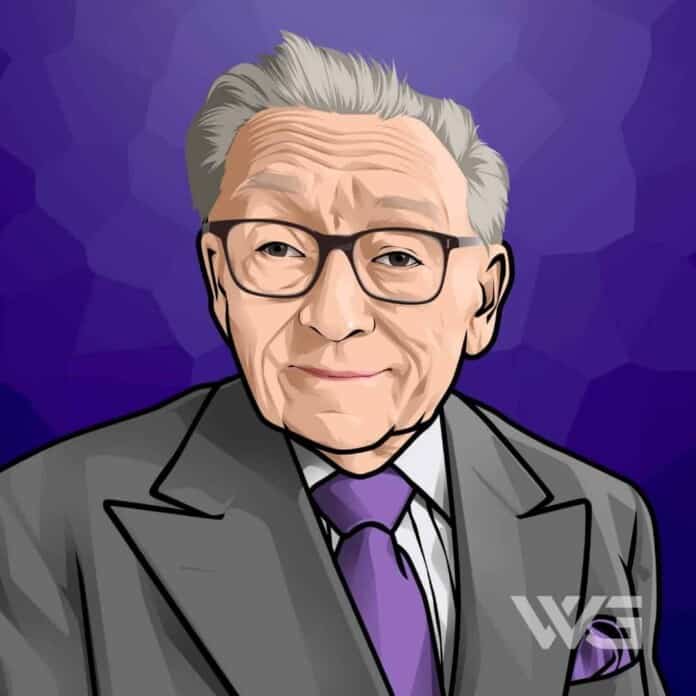 What is Larry Silverstein’s net worth?

Larry Silverstein is an American businessman.

Silverstein is the developer of the rebuilt World Trade Center complex in Lower Manhattan, New York City, and one of New York’s tallest residential towers at 30 Park Place, where he owns a home.

He has become involved in real estate, together with his father, establishing Silverstein Properties.

Larry A. Silverstein was born on the 30th of May, 1931, in Bedford-Stuyvesant, Brooklyn.

Silverstein attended the High School of Music and Art in New York and then New York University, graduating in 1952. During college, Silverstein worked at a summer camp, where he met his wife, Klara.

In 1957, alongside his father, they established Silverstein Properties, as Harry G. Silverstein & Sons, and bought their first building in Manhattan.

Silverstein graduated from New York University in 1952. With his father and brother-in-law, Larry started Silverstein Properties and bought a building in Manhattan.

He purchased more real estate in Midtown and Lower Manhattan after going out on his own. He sold a building to Coca-Cola in 1983 for $57.6 million, turning a profit of over $46 million.

His buildings housed tenants such as the National Urban League and the Illuminating Engineering Society of North America.

The 9/11 attacks led to a dispute with his insurance company regarding his intent to rebuild. He retained the rights to 150, 175, and 200 Greenwich Street, but One World Trade Center would go on to be owned by the Port Authority.

A few years later, he appeared at a rally in solidarity with construction workers and various other public employees to protest insurance companies Allianz & Royal and Sun Alliance.

This was due to what he considered their failure to fully compensate the insured $800 million in myriad insurance claims relating to the September 11th attacks in 2001.

How Does Larry Silverstein Spend His Money?

Silverstein spends some of his money on donations.

Here are some of the best highlights of Larry Silverstein’s career:

“When we sat down at the negotiating table yesterday, we were prepared to do what the governor had asked of us – to stay as long as it takes to reach an agreement that would allow us to do what all New Yorkers want – rebuild the World Trade Center. Unfortunately, it appears that we were the only ones at the table with that commitment.” – Larry Silverstein

“What is so spectacular is the opportunity to come together as we have in the last few days to rebuild the World Trade Center. It’s of great significance to me and to all New Yorkers.” – Larry Silverstein

“I can’t tell you why the government does what it does. In the private sector, this doesn’t happen. If they are sincere about making a deal, there’s nothing to prevent us from going right back to the table and getting it done. It’s just that simple. And we’re ready to do it today.” – Larry Silverstein

“The mayor has frequently urged us to proceed as quickly as possible, … I believe that New Yorkers want to see rapid rebuilding and not yet another exercise in planning and re-planning.” – Larry Silverstein

“Clearly, there are some issues that need to be resolved. But for today, my focus, like that of all New Yorkers, is on getting the Freedom Tower underway.” – Larry Silverstein

“I am thrilled with today’s victory. But this is a win for all New Yorkers. Today’s decision means an additional billion dollars of insurance proceeds will be available.” – Larry Silverstein

Now that you know all about Larry Silverstein’s net worth and how he achieved success; let’s take a look at some of the lessons we can learn from him:

Don’t stop when you’re tired. STOP when you are DONE.

How much is Larry Silverstein worth?

Larry Silverstein’s net worth is estimated to be $4 Billion.

How old is Larry Silverstein?

How tall is Larry Silverstein?

Larry Silverstein is an American businessman.

Silverstein is best known as the developer who purchased The World Trade Center in 2001. A month and a half before the complex was destroyed in the 9/11 attack.

He is also the developer for several other properties in New York and the District of Columbia.

What do you think about Larry Silverstein’s net worth? Leave a comment below.

What is Russell Westbrook's net worth? Introduction  As of ,...