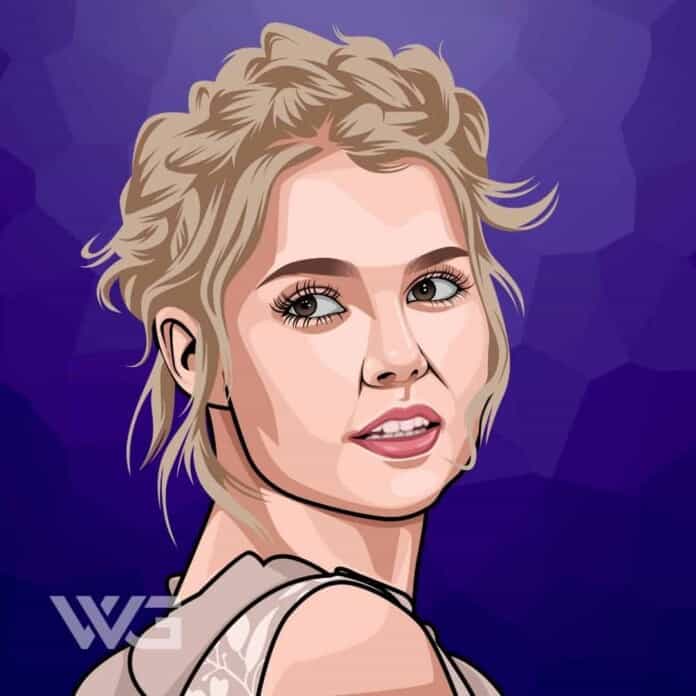 What is Lucy Boynton’s net worth?

As of November 2022, Lucy Boynton’s net worth is roughly $3 Million.

Lucy Boynton is a British-American actress from New York. Boynton made her film debut as the young Beatrix Potter in ‘Miss Potter’. She went on to feature in the films ‘Copperhead’, ‘Sing Street’, ‘Murder on the Orient Express’  and ‘Apostle’.

Boynton made her film debut when she was just 12 years old. She was spotted by a casting director at one of her drama classes. The casting director contacted Lucy and invited her for an audition.

In 2007, Lucy played ‘Posy Fossil,’ a ballerina and one of the three lead characters in the ‘BBC’ film ‘Ballet Shoes.’

Boynton was seen as ‘Henrietta Norton’ in the TV movie ‘Mo in 2010.’ The following year, she played a guest role in the British TV detective drama ‘Lewis.’

Lucy starred as ‘Esther Hagadorn’ in the 2013 Canadian–American film ‘Copperhead.’ Following this, she portrayed a mysterious model named ‘Raphina’ in the 2016 comedy-drama film ‘Sing Street.’

Lucy starred in the 2018 British–American period horror film ‘Apostle,’ in which she essayed the role of ‘Andrea.’ She was then cast in ‘Bohemian Rhapsody,’ the biopic of the iconic British rock band ‘Queen.’ Released in 2018, the film revolved around Freddie Mercury, the lead vocalist of ‘Queen.’

The film earned the entire cast, including her, a ‘Screen Actors Guild Award’ nomination for ‘Outstanding Performance by a Cast in a Motion Picture.’

Here are some of the best highlights of Lucy Boynton’s career:

“An all-girls school, when you have 800 girls from the age of 11 to 18, you would think, should be a prime opportunity to really inject a sense of confidence and power. And instead, we were very much taught in relation to men, in terms of what the brother school would think of us.” – Lucy Boynton

“We were always told not to wear skirts that were too short, because what will the male teachers think of you? Or, when we started sharing classes with boys in the sixth form, what will they think of you if you are wearing a miniskirt to lessons?” – Lucy Boynton

“”The people I look up to most are actresses such as Kate Winslet and Amy Schumer, who have never been size zero and are judged on their bodies of work, not their bodies.” – Lucy Boynton

“When you’re younger, you have a perfect plan for your life: I thought I would be engaged at 24, married at 26, have my first child at 28 and my second at 30. But as you get closer to each age, you realize it’s unfeasible.” – Lucy Boynton

Now that you know all about Lucy Boynton’s net worth, and how she achieved success; let’s take a look at some of the best lessons we can learn from her:

1. Sometimes You Need To Change

Until you change how you get things done, you’ll never know what works best.

2. The Definition Of NOW

The true definition of mental illness is when the majority of your time is spent in the past or future, but rarely living in the realism of NOW.

3. People Wants To Be Loved

Most people are just trying to be happy, and that most of their actions, however misguided, are in line with that goal.

Most people just want to feel they belong somewhere, want to be loved, and want to feel they’re important to someone. If you really examine all the wrongheaded and messed-up things they do, they can most often be traced back to that basic desire.

How much is Lucy Boynton worth?

Lucy Boynton’s net worth is estimated to be $3 Million.

How old is Lucy Boynton?

How tall is Lucy Boynton?

Lucy Boynton is an American-born English actor. She made her acting debut quite early in life and has been associated with several TV shows and films since then. Lucy is known for her roles in films such as ‘Miss Potter,’ ‘Murder on the Orient Express,’ and ‘Bohemian Rhapsody.’

What do you think about Lucy Boynton’s net worth? Leave a comment below.