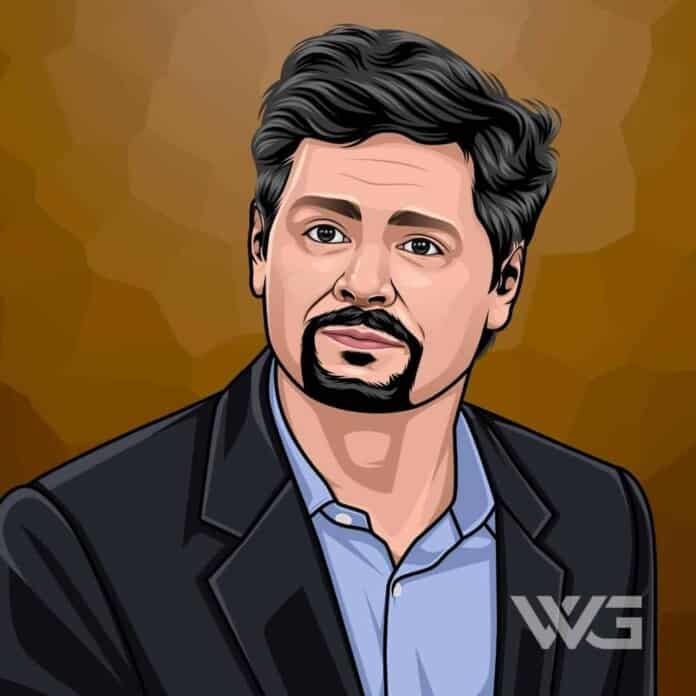 What is Mancow Muller’s net worth?

Mancow Muller is a radio and television personality.

His career has been well-known for controversy with the Federal Communications Commission. Muller is best known for Mancow’s Morning Madhouse, a syndicated radio show. He has co-starred with his brother Mark in the reality TV series ‘God, Guns & Automobiles.’ He was more recently the host of the morning show on WLUP-FM.

Muller is the son of John and Dawn Muller. He has two older brothers, Johnny and Mark. Growing up, he would love to listen to old tapes of classic radio shows such as The Shadow and The Stan Freberg Show.

As a youth, he appeared in over 100 stage performances. During one performance of the play, Henry Fonda was in the audience, and would later go on to play the lead character Norman in the film version. He also modeled as a child, and he was on television commercials regularly.

After graduating from college, Muller was hired as the morning talent at KBEQ-FM in Kansas City. He later went to Monterey and then San Francisco.

In 1993, Muller made headlines after he organized a publicity stunt. Before the stunt, a story would circulate claiming that Bill Clinton held up traffic at Los Angeles International Airport for an hour so he could get a haircut from a stylist.

In his stunt, he used vans to black traffic on a Bay Area bridge. He was later charged with creating a public nuisance. Muller was later sentenced to three years probation and was ordered to complete 100 hours of community service and pay a $500 fine. His radio station was forced to pay a $1.5 million civil suit settlement.

In 1994, he launched ‘Mancow Morning Madhouse.’ It was one of the top popular morning shows in Chicago for many years.

How Does Mancow Muller Spend His Money?

Muller owns a beautiful home in Wilmette worth $2 million, and it comes with five bedrooms.

Here are some of the best highlights of Mancow Muller’s career:

“I’ve been coming here forever. Do you like spicy? If you don’t, you may have a problem with Pollo a Mancow. It’s a pounded-out chicken breast covered with blue or gorgonzola cheese, giardiniera sauce, a few mushrooms, a few green olives, black olives, asparagus, and artichoke hearts. It’s dynamite.” – Mancow Muller

“This is the greatest restaurant in the world. My wife is from Italy and we came here on our first date. We sat here talking, and it was completely empty, and when we looked up, it was packed. We kept talking and when we looked up again, the chairs were on the table, and the waiters—they’re friends of ours now.” – Mancow Muller

“No, and I’m not sure this is the point I want to be at either. You know, when you’re young and filled with ideals I thought a career in radio—there used to be a thing called radio, it’s all but dead now—would allow me to live in a different city every year.” – Mancow Muller

“Sitting and talking about past relations is its own kind of hell. I get very bored. I’ve never liked living in the rear-view mirror. There’s a reason the window in the front is bigger. That’s where you’re supposed to be looking. I ripped off the side rear-view mirrors and I’m really always looking towards the future.” – Mancow Muller

“I want to tell you something. Something really big happened to me, life-changing. I was at Roger Ebert’s funeral, one of his many funerals, and everyone was jockeying to get on camera. Everybody was dummying up the tears. Roger and I were friends. Not close friends, not best friends, but we were friends.” – Mancow Muller

“That’s how it’s referred to, and that’s how it’s going to be known. I plan on turning half of it into a museum so we can open it up and let people see my props. I want to open it up for private tours, and I want to showcase all my science fiction collectibles.” – Mancow Muller

Now that you know all about Mancow Muller’s net worth and how he achieved success; let’s take a look at some of the best lessons we can learn from him:

1. You Only Live Once

We do only live once, which means that you need to do your best to enjoy the life you’re living right now.

Friends will come and go and there is nothing you can do about that, accept it.

3. Take Care of Your Mental Health

Or mental health is just as important as our physical l health. Take care of yourself first.

How much is Mancow Muller worth?

Mancow Muller’s net worth is estimated to be $10 Million.

How old is Mancow Muller?

How tall is Mancow Muller?

Mancow Muller is a well-known American radio and television personality.

Muller is best known for broadcasting in the Chicago area market. He is best known for his show ‘Mancow’s Morning Madhouse,’ which ran from 1994 to 2008. After he was fired from several radio stations, he started to host a Sunday night broadcast.

What do you think about Mancow Muller’s net worth? Leave a comment below.

What is Tanner Fox's net worth? Introduction  As of ,...