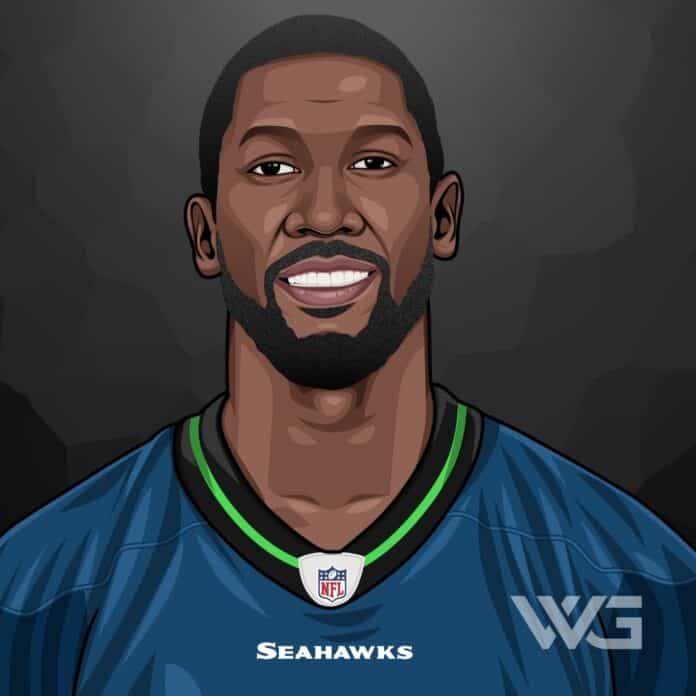 What is Marcus Trufant’s net worth?

Marcus Lavon Trufant is a former NFL cornerback who played for the Seattle Seahawks for 10 seasons.

Although he retired in 2012, Trufant continues to build his fortune as a successful entrepreneur in the self-storage business.

As of December 2022, Marcus Trufant’s net worth is estimated to be $50 Million.

Marcus Trufant was born December 25, 1980, in Tacoma, Washington, and he attended McCarver Elementary School and Truman Middle School as a child.

As a high school senior, the Associated Press named Trufant All-State, and The Seattle Times named him the AAAA Player of the Year.

Although he lost the AAAA Championship as a senior, he made a name for himself on the field, which got him recognized by many universities.

Ultimately, Trufant attended Washington State University, where he played four years as a member of the Cougars, making it to the Rose Bowl in 2003.

After graduation, Trufant made himself available for the NFL draft and was quickly snatched up by the Seattle Seahawks.

The Seattle Seahawks signed Trufant as their 11th overall pick in the 2003 NFL draft, and by 2008 he was elected to the Pro Bowl in Hawaii.

In the same year, the Seahawks signed a new six-year deal for $50.2 million, plus a $10 million signing bonus to ensure Trufant would stay with them.

While he continued to excel on the field, with 15 passes and 85 tackles, in 2011, he was placed on injured reserve due to a bruised sacrum that put an end to his season.

Although the Seahawks released Trufant in March of 2012, they resigned him a month later on a one-year contract.

In 2014, on April 23, Trufant signed a one-day contract with the Seattle Seahawks so that he could retire as a member of his first and former team.

Marcus Trufant may not have earned enough in the NFL to be considered one of the richest NFL players in the world, but he has earned a decent-sized fortune.

Although his earnings varied by season, he consistently earned more in a year than many people would in a decade.

He may not have been one of the highest-paid players on the field, but Marcus Trufant certainly made a lot of money playing for one of the richest NFL teams in the United States.

Marcus has been married to his wife Jessica since 2010, and the pair have five children together.

Jessica can often be heard on Trufant’s podcast “Truly Unruly,” which he posts on his official website along with news about the Trufant Family Foundation.

He has also been known to post about his younger brothers, both of whom have followed in his footsteps and joined the NFL.

Trufant’s younger brother, Isaiah Trufant, played in the NFL as a notable member of the New York Jets and Cleveland Browns, while his youngest brother, Desmond Trufant, was drafted by the Atlanta Falcons in 2013 and currently plays for the Las Vegas Raiders.

Marcus Trufant has been honored with many awards throughout his long career, each of which has helped distinguish him from other players.

While all of his accomplishments have been noteworthy, some stand out more than others.

Here are some of Marcus Trufant’s greatest career achievements:

Trufant may not have accumulated as many awards as Michael Strahan, but he certainly didn’t retire from the NFL empty-handed.

How Does Marcus Trufant Spend His Money?

In 2016, fans of Marcus Trufant got a peek into his lavish lifestyle when he put his Newcastle, Washington mansion up for sale with a price tag of $3.02 million.

Outside the front of the home lies a custom waterfall and miniature pond, while the large double doors and opulent columns welcome guests like the grand entrance to a palace.

Other features of this magnificent abode include a built-in sauna, four fireplaces, six bedrooms, seven bathrooms, and a three-car garage where some of the most expensive Lamborghinis in the world can be parked.

Although we don’t know much about the home he’s moved into since selling this mansion, we can assume that it is just as opulent, if not more so.

Marcus Trufant has experienced many unforgettable moments during his 10 years in the NFL that helped him stand out from other players.

However, some of his milestones are more significant due to their overall impact on his fame and fortune.

Here are some of the best highlights of Marcus Trufant’s career:

Marcus Trufant enjoyed a very impressive career, but these highlights were the most substantial overall.

Marcus Trufant was one of the most dedicated players in the NFL, and he’s kept his drive to succeed as he has moved on to other endeavors.

In all of his interviews, Trufant has emphasized how important it is to him that he keeps his eyes on the prize.

Here are our favorite quotes from Marcus Trufant:

There is a lot that we can learn from Marcus Trufant and his long career in the NFL.

Now that you know all about Marcus Trufant’s net worth, we can take a closer look at what he can teach us about reaching our own goals.

Here are some of the best success lessons to learn from Marcus Trufant:

1. Surround Yourself With Talent

If you want to become successful, it is important that you surround yourself with like-minded and talented people.

This can not only provide you with a great support network, but it can help you make invaluable connections that can help open doors to important opportunities.

2. Focus On The Here And Now

Although it is important to plan ahead, you shouldn’t get too caught up in what could be, and instead, focus on the here and now.

By doing this, you can give 100% to your current projects without getting bogged down by the bigger picture.

3. Take Control Of Your Destiny

Ultimately, you are in control of your own success, and it is up to you to make your dreams come true.

You can’t just sit back and hope that an opportunity will present itself; you must put in the hard work to make it all happen.

Marcus Trufant is a former American cornerback who excelled during his 10 seasons in the NFL.

While he has since gone on to become a successful entrepreneur, his net worth is only continuing to increase as his business flourishes.

Make sure to check back often so that you don’t miss any updates impacting Marcus Trufant’s wealth.

As of December 2022, Marcus Trufant’s net worth is estimated to be $50 Million.

What do you think about Marcus Trufant’s net worth? Leave a comment below.