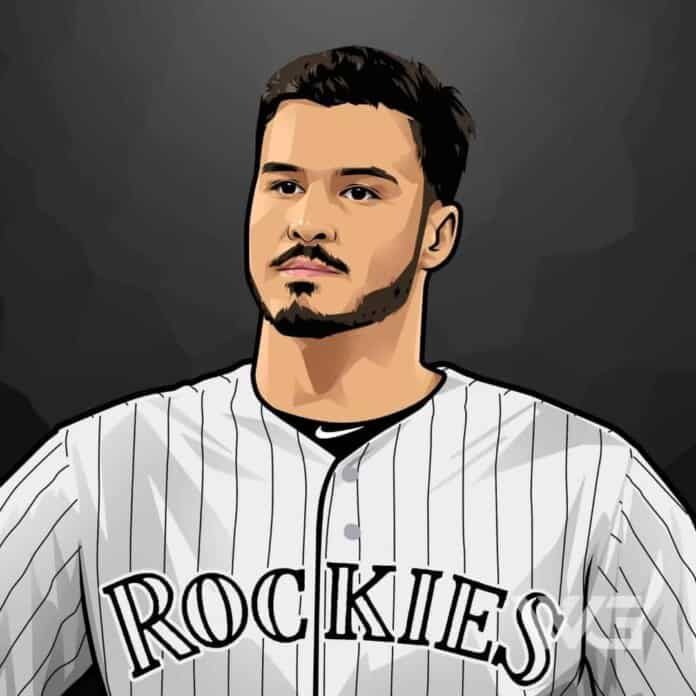 What is Nolan Arenado’s net worth?

He is the third baseman for the Colorado Rockies of MLB. Arenado made his MLB debut with the Rockies in 2013. Arenado has been considered among the top third basemen in the league both for his contributions as a hitter for power and average and his defensive range and arm strength.

As of February 2023, Nolan Arenado’s net worth is estimated to be $40 Million.

His father, Fernando, is of Cuban nationality, and his mother, Millie, a native of Queens, New York, is of Cuban and Puerto Rican ancestry.

He has an older brother, Fernando Jr., and his younger brother, Jonah, is a corner infielder in the San Francisco Giants’ organization.

The Colorado Rockies selected Arenado in the second round with the 59th overall selection of the 2009 Major League Baseball Draft.

Rather than attend Arizona State, he signed with the Rockies and made his professional debut with the Casper Ghosts of the Rookie-level Pioneer League.

Before the 2011 season, Baseball America named Arenado the Rockies’ third-best prospect and the 80th-best overall.

Playing for the Modesto Nuts of the Class A-Advanced California League, Arenado and Wilin Rosario represented the Rockies at the 2011 All-Star Futures Game, following a solid first half where he had a .283 batting average with six home runs and 42 RBI.

Despite an intense spring training in 2013, the Rockies optioned Arenado to the Colorado Springs Sky Sox of the Class AAA Pacific Coast League to start the season.

Arenado won his fourth Gold Glove at third base, becoming the first third baseman in MLB history to win four Gold Gloves in his first four seasons, as well as his second Silver Slugger.

As of February 2023, Nolan Arenado’s net worth is estimated to be roughly $40 Million.

Here are the best highlights of Nolan Arenado’s career:

“I think it’s a compliment, knowing that teams, you hear your name, and teams would love to have you on their team. I will never forget, when I was younger, my dad would always say, you’re always playing for 30 teams. Thirty teams are watching. Now, I’m going out there, and 29 teams are watching. It’s a good feeling.” – Nolan Arenado

“I’m not someone who cashes a check and packs it in. Now, hey, man, you never know what can happen. I want to win here. But if it doesn’t work out, hey, maybe there would be another team, a winner, that would want me on their team. I think it’s a great thing. It gets me fired up for the season, to go out there and compete.” – Nolan Arenado

“I’m going to miss some of my boys in Colorado, the people that I care about over there. I’ve known them since I was a 17-year-old, or when I was called up at 22. But the sweet moment was coming here to a great organization with great history and with great players.” – Nolan Arenado

“How we need to touch a base to go to the next base. Suppose there’s a first and third situation – how I need to go, where to be. We went over the stuff in Colorado. But the way they explain it or the way they want you to do it is different. I love it.” – Nolan Arenado

Now that you know all about Nolan Arenado’s net worth and how he achieved success; let’s take a look at some of the best lessons that we can learn from him:

Be true to your work, your word, and your friend.

Just believe in yourself. Even if you don’t, pretend that you do and, at some point, you will.

How much is Nolan Arenado worth?

Nolan Arenado’s net worth is estimated to be $40 Million.

How old is Nolan Arenado?

How tall is Nolan Arenado?

Nolan Arenado is an American professional baseball player drafted by the Colorado Rockies in the 2009 Major League Baseball Draft. Nolan Arenado made his MLB debut for the Rockies in 2013.

As of February 2023, Nolan Arenado’s net worth is estimated to be $40 Million.

What do you think about Nolan Arenado’s net worth? Leave a comment below.