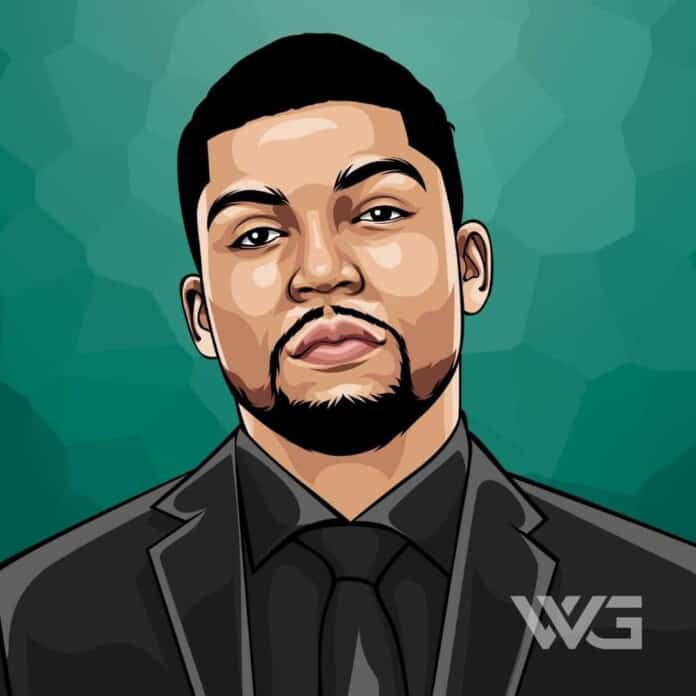 What is O’Shea Jackson Jr.’s net worth?

O’Shea Jackson Jr. is an American actor and rapper. Jackson Jr. is the oldest son of rapper Ice Cube and portrayed his father in the 2015 biopic Straight Outta Compton, which was his feature film debut.

O’Shea Jackson Jr. was born on the 24th of February, 1991, in Los Angeles, California. He is the son of O’Shea Jackson Sr., better known as Ice Cube, and Kimberly Woodruff. Aside from being of African American descent, he is also of Cherokee descent, through his mother.

Jackson was raised in the San Fernando Valley and is the first child of four. He has two younger brothers, Darrell and Shareef, and a younger sister, Kareema.

In 2010, Jackson and his brother Darrell were featured on the songs “She Couldn’t Make It On Her Own” and “Y’all Know How I Am”, from their father’s album I Am the West.

In March 2012, Jackson, under the name OMG, released his first mixtape, Jackin’ for Beats, online. Jazmine Gray of Vibe said, “True to its title, the hip-hop rookie offers his own lyrics over the beats of some of the most popular tracks of the year. The 10-track tape finds the son of a hip hops icon off to a promising start.”

In June 2014, it was announced that Jackson had been cast to portray his father, Ice Cube, in Straight Outta Compton, a biographical film about N.W.A.

The film was released on August 14, 2015, to positive reviews. Jackson is noted for his physical resemblance to his father, which Ice Cube described as “spot on”.

In 2018, Jackson starred in the film ‘Den of Thieves’, which also included 50 Cent and Gerard Butler.

Here are some of the best highlights of O’Shea Jackson Jr.’s career:

“Our trials and our times of pain get the most recognition, but ‘Straight Outta Compton’ speaks to triumph. When it’s doubtful when nobody is on your side when your back is against the wall, you triumph and make it through. Showing growth through movies promotes growth.” – O’Shea Jackson Jr.

“Being on set with my dad – that’s so cool. People always ask me if that made me nervous, but it’s the same element when you’re a kid – when your parents come in the auditorium for those school performances. It calms you.” – O’Shea Jackson Jr.

“The trials my father went through were things most young black males have to go through. There was nothing he shielded from me because it doesn’t matter how you grow up, those who oppress will oppress. It’s all completely relatable; everyone feels NWA.” – O’Shea Jackson, Jr.

Now that you know all about O’Shea Jackson Jr.’s net worth, and how he achieved success; let’s take a look at some of the lessons we can learn from him:

1. Your First Business Likely Won’t Be Your Last

Many entrepreneurs will tell you this lesson from the film – the first company you start is rarely the last. Some of the most famous entrepreneurs in the world had a stack of failures behind them.

Then they found the perfect formula. In the film, there are several examples of this. Eazy-E started out a drug dealer (not the best example of a business venture). Then he moved into be a music entertainer.

When you are involved in the excitement of running your own business or any venture, you can forget the boring stuff. But the official and legal stuff is just as important. In the movie, contract problems led to the downfall of the stars. Shortcuts, lack of contracts and other legal issues broke up the group.

3. Learn to Make Decisions On The Fly

Gut instinct is something we hear a lot about. Cop shows are particularly big on ‘going with your gut.’ In the film, Ice Cube goes with his gut to perform a controversial song in a Detroit concert.

This causes a lot of the drama that follows. Sometimes making decisions on the fly can be a good thing. The idea behind it is something we can all embrace.

There are times when you need to make decisions on the fly and do what your gut tells you.

How much is O’Shea Jackson Jr. worth?

O’Shea Jackson Jr.’s net worth is estimated to be $3 Million.

How old is O’Shea Jackson Jr.?

How tall is O’Shea Jackson Jr.?

O’Shea Jackson Jr is an American actor and rapper, who is the son of Ice Cube, and he portrayed his father in the 2015 film Straight Outta Compton. He won an Image Award for Outstanding Supporting Actor in a Motion Picture for Straight Outta Compton and was nominated for a Screen Actors Guild Award.

What do you think about O’Shea Jackson Jr.’s net worth? Leave a comment below.