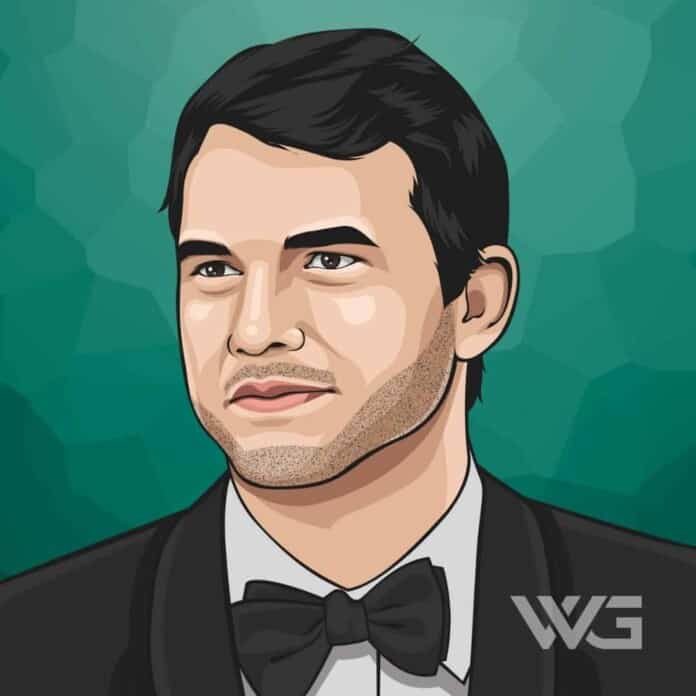 What is Ashton Kutcher’s net worth?

As of February 2023, Ashton Kutcher’s net worth is roughly $200 Million, making him one of the richest actors in the world.

Ashton Kutcher is an American actor and investor, and is notorious for starring in romance/comedy films; such as Just Married, What Happens In Vegas, and Dude, Where’s My Car?

He’s also hosted the TV show Punk’d, and had a regular role in Two and a Half Men since 2011, replacing the one and only Charlie Sheen. Kutcher is now married to the actress Mila Kunis, and they have two children together.

Christopher Ashton Kutcher was born on the 7th February, 1978, in Cedar Rapids, Iowa. His parents are of Czech, German and Irish descent, and his mother Diane worked at Proctor & Gamble, whilst his father Larry was a factory worker.

Kutcher has two siblings; an older sister called Tausha, and a twin brother called Michael, who has cerebral palsy. Michael is a spokesperson for the advocacy organization Reaching for the Stars.

Ashton said he kept himself very busy growing up, mainly because of being stressed by his brother’s condition, and not wanting to come home to more bad news every day.

He attended Washington High School in Cedar Rapids for a year, before moving to Homestead and attending Clear Creek Amana High School.

As a teenager, Kutcher was already interesting in acting. He was also depressed from his parent’s divorce when he was 16, and shortly ended up down the wrong path. He was convicted of third-degree burglary, and sentenced to 180 hours of community service.

Kutcher briefly attended college at the University of Iowa, but dropped out to pursue a professional modelling career.

After dropping out of college, Ashton Kutcher signed a modelling contract with Next modelling agency in New York. He appeared in commercials for Calvin Klein, and modelled in Paris and Milan.

Aside from his successful film career, Ashton has hosted the TV show Punk’d, and also starred in Two and a Half Men, after replacing Charlie Sheen in 2011.

And, aside from acting completely, Kutcher is quite a savvy investor. He’s invested in a lot of startups over the years; in fact, over 60 of them. These include the likes of Airbnb, Skype, FourSquare, ResearchGate, and Zenreach.

As of February 2023, Ashton Kutcher’s net worth is estimated at $200 Million.

Here are some of the best highlights of Ashton Kutcher’s career:

“My parents couldn’t give me a whole lot of financial support, but they gave me good genes. My dad is a handsome son-of-a-gun, and my mom is beautiful. And I’ve definitely been the lucky recipient. So, thank you, Mom and Dad.” – Ashton Kutcher

“I’m from Iowa, we don’t know what cool is!” – Ashton Kutcher

“My mom is still yelling at me because she needs more autographed pictures.” – Ashton Kutcher

“There’s something advantageous about having people underestimate your intellect, insomuch as a lot of things are revealed to you. They assume you don’t know what you’re talking about, then all of a sudden, you do. And the next thing you know, you have information you wouldn’t normally have.” – Ashton Kutcher

“The sexiest thing in the entire world is being really smart. And being thoughtful. And being generous. Everything else is crap!” – Ashton Kutcher

5 Rules for Success from Ashton Kutcher

Great questions cause us to sit for days and ponder a solution. They expose problems, and problems are the seeds to solutions. Great questions expose road blocks, which are an entrepreneur’s opportunity. A great question sometimes will arrive at a no, which is the playground for a rebel spirit.

2. Build A Library of Advice

The best thing to do is build up this reservoir, this library, of extraordinary advice that you can access anytime you’re in crisis. And that’s what I do.

The sexiest thing in the entire world is being really smart. And being thoughtful, and being generous. Everything else is crap, I promise you. It’s just crap that people try to sell to you to make you feel like less, so don’t buy it. Be smart, be thoughtful, and be generous.

Generosity has to be at the core of anything and everything we do. Some of the best advice I ever received is somebody once told me that the difference between good and bad is very simple.

That’s what engineering is. It was the first thing that I learned as an engineering student, was scientists look at problems and they find out about problems, and engineers solve them.”

How much is Ashton Kutcher worth?

Ashton Kutcher’s net worth is estimated to be $200 Million.

How old is Ashton Kutcher?

How tall is Ashton Kutcher?

Ashton Kutcher is one of the richest actors in the world, and also one of the most loved.

As of February 2023, it’s estimated that Ashton Kutcher’s net worth is $200 Million.

What do you think about Ashton Kutcher’s net worth? Leave a comment below.

American actress Jessica Biel has earned an incredible net worth, making her a Hollywood powerhouse and one of the most recognizable Hollywood stars.