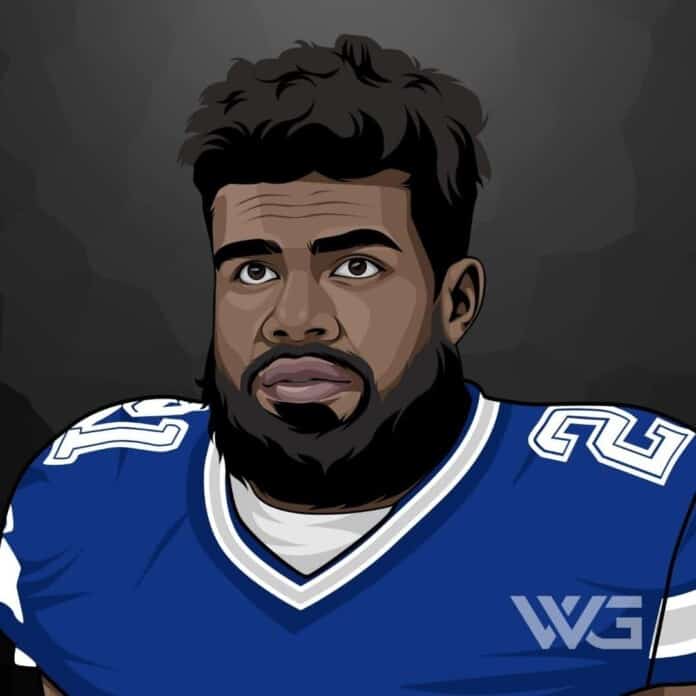 What is Ezekiel Elliott’s net worth?

Ezekiel Elliott is an American football running back for the Dallas Cowboys of the NFL.

He played college football at Ohio State, where he earned second-team All-America honors in 2015. He was drafted by the Cowboys fourth overall in the 2016 NFL Draft.

Ezekiel Elliott was born on the 22nd of July, 1995, in St. Louis, Missouri. His father, Stacy Elliott, used to be a linebacker for the Missouri Football team.

Elliott attended John Burroughs School in Ladue, Missouri. He was proficient in many sports, including football, basketball, and track. Soon, he began playing for the John Burroughs Bombers football team.

During his junior year in 2012, Ezekiel Elliott rushed for 1802 yards and 34 touchdowns and received 23 passes for 401 yards along with six scores.

During the season beginning in 2014, he rushed over 100 yards six times. He ran a total of 220 yards on 20 carries for two touchdowns, during the 2014 Big Ten Championship Game. He helped Ohio State qualify for the first-ever college football playoffs.

During his tenure at Ohio State University, his performance won him numerous honors, such as the title of the Offensive MVP of both the ‘2015 Sugar Bowl’ and the 2015 ‘College Football Playoff National Championship game.’

Here are some of the best highlights of Ezekiel Elliott’s career:

“I am tired of hearing about Coach Harbaugh; I think he needs to get in check with reality because, at the end of the day, you can’t talk smack about a rivalry when you haven’t won a rivalry game. You got to win ballgames to be able to talk behind it.” -Ezekiel Elliot

“That’s something I kind of started Week 1, so when it got to where I’m getting a little beat up, I have a routine already for getting my body back together. Just getting in the cold tank, making sure you’re getting massages.” – Ezekiel Elliott

“I’ve worked on my game, and I don’t think it has any holes, no weaknesses. I say that with humility because you can always work to get better. But I run inside, I run outside, and I’m just not a guy you have to take off the field for certain packages.” – Ezekiel Elliott

“When you let those defensive backs know that you’re a physical player, they don’t really want to tackle. That’s it. That’s why you see me get a hurdle every game. Those guys don’t want to tackle me when I get to the second level.” – Ezekiel Elliott

“Honestly, the type of runner I am, I’m a physical guy, and I try to set the tone early in the game, so you’re going to see it a lot in the first and second quarters.” – Ezekiel Elliott

Now that you know all about Ezekiel Elliott’s net worth, and how he achieved success; let’s take a look at some of the lessons we can learn from him:

Trust your landmark and run through the smoke. It’s going to open up eventually.

The best way to learn is getting out there, getting reps, and making mistakes.

The more you see, the more you’re going to learn. Just got to take advantage of the opportunity and get ready to play ball.

How much is Ezekiel Elliott worth?

Ezekiel Elliott’s net worth is estimated to be $25 Million.

How old is Ezekiel Elliott?

How tall is Ezekiel Elliott?

Ezekiel Elliott is an American football running back for the Dallas Cowboys of the NFL.

Having won several awards throughout his career, such as the ‘FedEx Ground Player of the Year’ and ‘Offensive Rookie of the Year’, Elliott can be considered one of the best players of the NFL.

As of February 2023, Ezekiel Elliott’s net worth is approximately $25 Million.

What do you think about Ezekiel Elliot’s net worth? Leave a comment below.