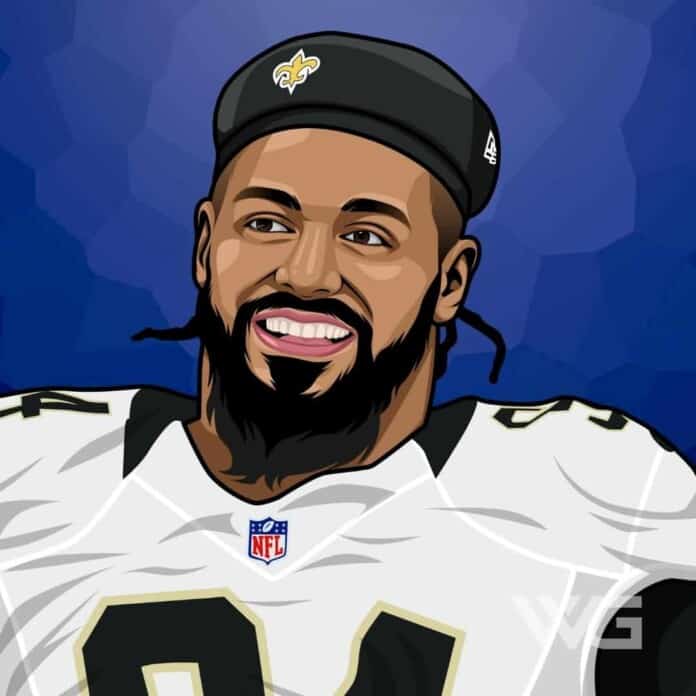 What is Cameron Jordan’s net worth?

As of November 2022, Cameron Jordan’s net worth is approximately $67 Million.

Cameron Jordan is an American football defensive end for the New Orleans Saints of the NFL.

Jordan played college football at California and was drafted by the Saints in the first round of the 2011 NFL Draft.

Cameron Jordan was born on the 10th of July, 1989, in Minneapolis, Minnesota. Jordan is the son of former Minnesota Vikings tight end Steve Jordan.

He attended Chandler High School in Chandler, Arizona, where he was a two-sport star in football and track for the Chandler Wolves.

Regarded as a three-star recruit by Rivals.com, Jordan was listed as the #37 strongside defensive end of the class of 2007.

In 2011, Jordan played in the 2011 Senior Bowl and was part of Marvin Lewis’s North team that lost 24-10 to the South. His overall performance during Senior Bowl practice helped his draft stock and made him a definitive first-round pick in the upcoming draft.

The New Orleans Saints selected Jordan in the first round (24th overall) of the 2011 NFL Draft. Jordan was the fifth defensive end drafted in 2011, behind J. J. Watt, Robert Quinn, Ryan Kerrigan, and Adrian Clayborn.

In 2013, the New Orleans Saints fired defensive coordinator Steve Spagnuolo after the defense allowed an NFL record 7,042 total yards in 2012.

The Saints signed Jordan to a three-year, $52.5 million contract extension with $42 million guaranteed in 2019, keeping him under contract through the 2023 season.

Here are some of the best highlights of Cameron Jordan’s career:

“You know, if anything, I give credit to my dad. For as far back as I can remember, he’s always giving back to the surrounding community of Minnesota when he was playing, and Arizona, where we moved to after, where he’s from.” – Cameron Jordan

“I don’t know. That’s a great question because, in terms of everything I do, I always want to feel like I can do more. We talk about there are guys who’ve started a foundation, and as much as I talk about I could start my own foundation.” – Cameron Jordan

“Anytime you do a hospital visit, anytime you talk about seeing an intensive care unit. It’s one thing to go and talk to kids, be able to see that life force, that active, vibrant energy in all aspects of life. Then you go around and you turn to a hospital visit.” – Cameron Jordan

Now that you know all about Cameron Jordan’ss net worth, and how he achieved success; let’s take a look at some of the lessons we can learn from him:

Talent is cheaper than table salt. What separates the talented individual from the successful one is hard work.

Luck is a dividend of sweat. The more you sweat, the luckier you get.

It’s not about money or connection — it’s the willingness to outwork and outlearn everyone.

How much is Cameron Jordan worth?

Cameron Jordan’s net worth is estimated to be $67 Million.

How old is Cameron Jordan?

How tall is Cameron Jordan?

Cameron Jordan is a professional NFL player from Minnesota.

As he was selected to his fourth overall Pro Bowl and second consecutive. He also achieved All-Pro for the second straight season.

As of November 2022, Cameron Jordan’s net worth is estimated to be $67 Million.

What do you think about Cameron Jordan’s net worth? Leave a comment below.

What is Jason Statham's net worth? Introduction As of ,...