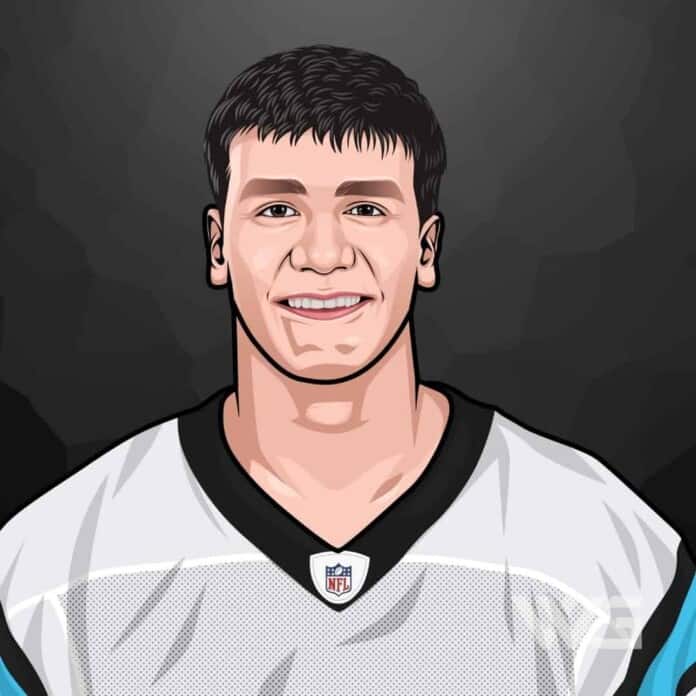 What is Jake Delhomme’s net worth?

He played college football at the University of Louisiana at Lafayette. After playing college football, he signed with the New Orleans Saints as an undrafted free agent after the 1997 NFL Draft.

He started his professional career as a practice squad player with the Saints. He played his first NFL games in 1999.

As of November 2022, Jake Delhomme’s net worth is estimated to be roughly $20 Million.

Jake Christopher Delhomme was born on the 10th of January, 1975, in Louisiana.

Delhomme is the son of Jerry and Marcia Delhomme. His grandfather bred horses, and his father was a jockey who began racing at 8 years old.

Delhomme called horses his “first love.” Today, he and his father train thoroughbreds. He played both quarterback and defensive back for Teurlings Catholic; he made the all-state team in high school not as a quarterback but on defense. In addition, Delhomme was a scholar serving as Senior Beta Club president of his chapter in Louisiana.

As a freshman, Delhomme had the second-ranked passer efficiency ratings. The team won the Big West Conference twice, with Jake as their quarterback.

Delhomme finished as the University’s all-time passing leader in both touchdowns and yards. In 2006, he was inducted into the school’s “Athletic Hall of Fame”.

He was not selected in the 1997 NFL Draft but was signed as a free agent by the New Orleans Saints. He played on the practice squad and spent two years in the NFL Europe league.

Delhomme had his first NFL games in 1999. He started as quarterback for the Carolina Panthers from 2003 to 2009. He led the team to the Super Bowl in his first season in Carolina. In 2010, he went to play for the Cleveland Browns. The following year, he played for the Houston Texans.

Delhomme is the Carolina Panther’s all-time leader in passing attempts, completions, and interceptions. His 85-yard touchdown pass in the Super Bowl set a record for longest pass in Super Bowl history. He has become the spokesman for the fast-food restaurant Bojangles.

As of November 2022, Jake Delhomme’s net worth is estimated to be roughly $20 Million.

Here are some of the best highlights of Jake Delhomme’s career:

“He hasn’t lost his vision. That’s one thing. He’s good. The guy is smooth and knows how to set up blocks. He’s a veteran, too. It’s fun to watch him run. Hopefully, everything works out all right physically, but certainly, he looks good so far.” -Jake Delhomme

“Absolutely not. After watching four games yesterday, one thing you do notice is how extremely fast their defense is. You can certainly talk about (John) Abraham and (Shaun) Ellis and their LB, and I have the utmost respect for someone like Ty Law.” – Jake Delhomme

“I don’t know if we had a swagger. I think we played confident football. I think we’re starting to do that. We’ve played a couple of decent games after the bye week, and we’re just going to keep on trying to do what we’ve been doing.” – Jake Delhomme

“Absolutely. Steve is 26 years old. He’s a young guy. We saw a couple of years ago how good we thought he could be. That was really his third year playing receiver and learning the position. I saw him all training camp last year, and he had an ankle injury, a broken ankle, but he came back.” – Jake Delhomme

“I would have signed if I was offered a contract. This was in 1999. I didn’t have a job at the time. I went in for a workout, and I think they had a bunch of injuries at that time too at the QB position, I recall.” – Jake Delhomme

“I didn’t see the hit, but I did hear he had another concussion. A couple of weeks ago, my deal with DET, I came back within five minutes. I knew what was going on, and it never really got classified as a concussion because of all the tests they ran.” – Jake Delhomme

Now that you know all about Jake Delhomme’s net worth and how he achieved success; let’s take a look at some of the lessons we can learn from him:

Don’t give up. The beginning is always the hardest. Life rewards those who work hard.

Once you commit, you need the discipline and hard work to get you there

Your ability to discipline yourself to set clear goals and work toward them every day will do more to guarantee your success than any other single factor.

How much is Jake Delhomme worth?

Jake Delhomme’s net worth is estimated to be $20 Million.

How old is Jake Delhomme?

How tall is Jake Delhomme?

He was born in Louisiana in 1975. Delhomme made the all-state team in high school as a defensive back. Delhomme played at the University of Louisiana at Lafayette.

He made numerous records during his stay with the team. He later played for the Cleveland Browns and Houston Texans before his retirement.

As of November 2022, Jake Delhomme’s net worth is estimated to be roughly $20 Million

What do you think about Jake Delhomme’s net worth? Leave a comment below.

What is Bob Weir's net worth?  Introduction    Bob Weir is...