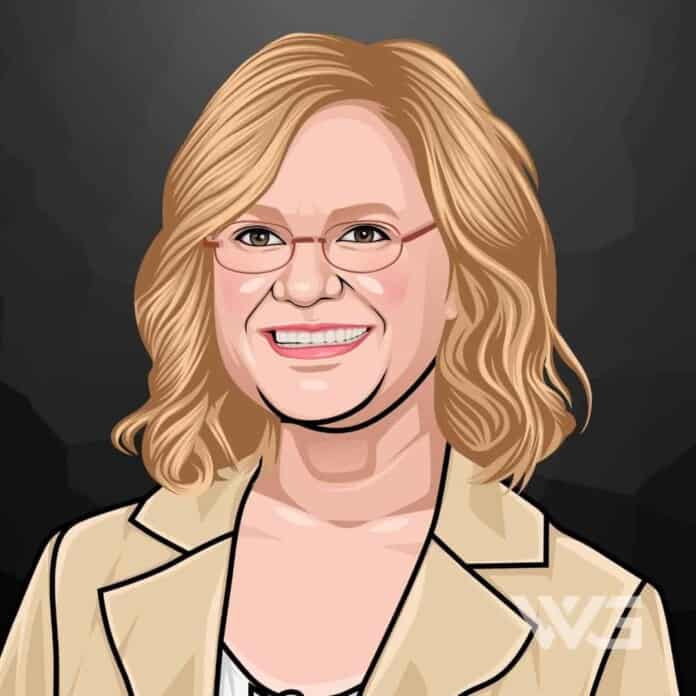 What is Bonnie Hunt’s net worth?

Bonnie Hunt is an American actress and comedian.

Hunt is the daughter of Robert Edward Hunt and Alice E. Hunt. She has three older brothers and two older sisters.

She was educated in Catholic schools attending St. Ferdinand Grammar School and Notre Dame High School for Girls in Chicago.

In 1982, she worked as an oncology nurse at a hospital in Chicago. In 1984, Hunt co-founded an improvisational comedy troupe called An Impulsive Thing.

In 1993, she teamed up with David Letterman to produce ‘The Building.’ In 1995, Hunt and Letterman reteamed for ‘The Bonnie Hunt Show’.

It features many of the same cast members as ‘The Building’ and the same loose style. Her role in the series earned her an Emmy nomination.

Hunt directed and co-wrote in ‘Return to Me.’ It was filmed in her Chicago neighborhood and included parts for a number of her relatives.

The film was influenced by Hunt’s blue-collar Catholic upbringing in Chicago.

In 2007, Hunt taped a pilot for ‘Telepictures.’ The following year, ‘The Bonnie Hunt Show’ had its premiere.

The set design was a tribute to Dean Martin, and on the walls are pictures of historic television personalities and Hunt’s family members.

How Does Bonnie Hunt Spend Her Money?

Hunt has supported charities such as the Multiple Myeloma Research Foundation and The Humane Society.

Here are some of the best highlights of Bonnie Hunt’s career:

“Oprah was not somebody who was telling us what to do. She wasn’t really teaching us like so many people we see today. With Oprah, she was learning and we were learning with her. And I think that’s really was the seed that was planted for all of us to just hang in there with her.” – Bonnie Hunt

“Because I’ve been so blessed with a background in nursing and spent so much time with patients at a really intimate, vulnerable time in their lives, the one lesson I’ve learned is that you never turn down a challenge where you can keep your creative integrity and your heart and soul and your sense of self.” – Bonnie Hunt

“The first time I was on ‘Johnny Carson,’ I remember being so scared, but the minute he started talking to me, I felt a little more comfortable because I just knew he was going to take care of me. Hopefully, I have learned something from watching him for so many years that I can offer that to a guest.” – Bonnie Hunt

“I remember, when I was 7, my dad found a pregnant dog on the railroad track one day and brought her home. So my mom explained about how this dog was married but that her husband had passed away – she didn’t want me even to think that a dog could have babies without being married.” – Bonnie Hunt

“Chicago has definitely played a part in my character development. I love the essence of the city, the personalities of the people, the hard-working spirit that you need to get through the winters. And every neighborhood has its great restaurants and the local hot-dog stand.” – Bonnie Hunt

Now that you know all about Bonnie Hunt’s net worth and how she achieved success; let’s take a look at some of the lessons we can learn from her:

If Hunt learned one thing in life, it’s: Stand for something, or you’ll fall for anything.

2. Stress and Moments Of Relief

But you do know the difference between stress and moments of relief where there’s, like, this happiness.

If you’re authentic, people smile because they sense there’s a piece of themselves there.

How much is Bonnie Hunt worth?

Bonnie Hunt’s net worth is estimated to be $12 Million.

How old is Bonnie Hunt?

How tall is Bonnie Hunt?

Bonnie Hunt is an American actress, comedian, writer, and host.

Hunt has starred in several sitcoms and has had more success in films such as ‘Beethoven,’ ‘Cheaper by the Dozen,’ ‘Jumanji,’ ‘The Green Mile,’ and ‘Jerry Maguire.’

Hunt is a multi-talented artist best known for hosting the talk show ‘The Bonnie Hunt Show’.

In 1984, she became a founding partner for an improvisational comedy troupe named “An Impulsive Thing.”

What do you think about Bonnie Hunt’s net worth? Leave a comment below.