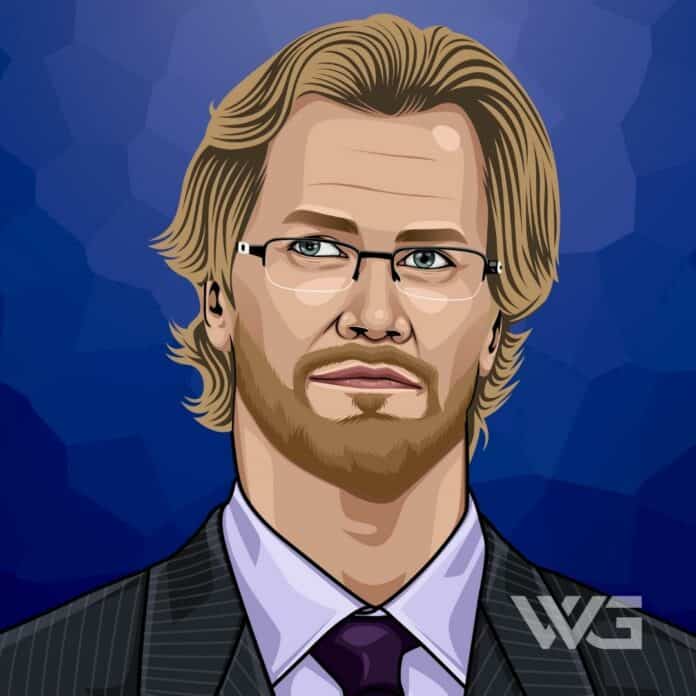 What is Chris Pronger’s net worth?

Chris Pronger is a professional ice hockey player and an Olympic gold medal recipient who has earned a massive net worth with his talents.

While he has since retired from the rink, Pronger continues growing his fortune through advisor positions and his travel business.

As of February 2023, Chris Pronger’s net worth is estimated to be $65 Million.

Before entering the junior leagues, Chris was a minor hockey player in his hometown, and at 15, he signed with the Stratford Cullitons Jr. B club for the 1990-1991 season.

In 1991, Pronger joined the Ontario Hockey League, and after two impressive seasons, he was selected to play with the Hartford Whalers in the 1993 NHL Entry Draft.

Chris Pronger made his NHL debut during the 1993-1994 season, and while his talents on the ice were evident, teammates reported that he was impatient and prone to immaturity.

After a second season with the Hartford Whalers, Chris was traded to the St. Louis Blues in exchange for Brendan Shanahan, their star forward.

Late in his first season, the St. Louis Blues acquired Wayne Gretzky, which took the pressure off of Pronger, allowing him to concentrate more on his defensive skills.

During his third season with the team and his first as captain, Pronger was named to the All-Star team but faced brief cardiac arrest after being hit in the chest with a puck during the 1998 Stanley Cup playoffs.

Following the 2004-2005 season, Pronger was traded to the Edmonton Oilers and selected to play for Team Canada during the 2006 Winter Olympics.

Pronger played for the Oilers until 2007, when he was drafted to the Anaheim Ducks, which he helped to win a Stanley Cup title.

In 2008, Pronger was named the captain of the Anaheim Ducks, and during the 2008-2009 season, he played his 1,000th career game before being traded to the Philadelphia Flyers, who he would play for until 2011, where his injuries would limit the games he could play, eventually forcing him to retire.

As one of the richest hockey players in the world, it is safe to say that Pronger has earned a lot during his time as a professional hockey player.

While we don’t have all the details about Pronger’s annual earnings, what we do know includes:

It should also be noted that Pronger earned between $7 million and $500k between 2013 and 2017 when he was on reserve after retiring due to his injury.

Chris Pronger married his wife Lauren in 1999, and together they have three children.

The couple previously lived in Irvine, California, while Pronger played for the Anaheim Ducks, later moving to Chestfield, Missouri, where he now runs his travel business.

Pronger’s travel business, which he started after retiring, is called Well Inspired Travels, and it is designed to be a luxury travel agency that provides clients with private charters, VIP access, protection, and high-end accommodations.

Chris Pronger has won many awards throughout his career, many of which are highly prestigious.

However, while all of his accolades are significant, some stand out more than others.

Here are some important awards and achievements from Chris Pronger’s career:

While he may not be the most decorated ice hockey player in the world, Pronger has earned many accolades for his skills on the ice.

How Does Chris Pronger Spend His Money?

In 2021, Chris Pronger and his family settled in the suburbs outside of St. Louis, Missouri, but had previously lived in Ladue, Missouri, in a lavish mansion that had its own private swimming pool.

While Pronger has been tight-lipped about how much his homes have cost or sold for, we can easily assume that the price tags have been in the millions.

This former hockey player may not be flaunting his wealth in one of the most expensive cities in the world, but he’s certainly living a life of luxury while overseeing his travel business.

Chris Pronger has achieved a lot throughout his career that has helped make him remarkably wealthy.

While he’s enjoyed many successes, some have been more significant than others.

Here are some of the best highlights of Chris Pronger’s career:

Each of these highlights have been important milestones in Pronger’s career that have enabled him to grow his wealth and fame as a talented hockey player.

Although he is best known for his skill on the hockey rink, Chris Pronger has been known to say many interesting things during interviews.

While he may not be the most vocal hockey player when it comes to talking about his career, he has said a couple of things that stand out.

Here are our favorite quotes from Chris Pronger:

There is a lot about success that we can learn from this professional hockey player.

Now that you know all about Chris Pronger’s net worth, let’s look more closely at what he can teach us about reaching our own goals.

Here are some of the best success lessons to learn from Chris Pronger:

If you’re someone who struggles to remember important dates or things that you need to take care of, writing them down is one of the best things you can do.

You can even take things one step further and create a schedule for yourself so that you don’t risk falling behind or missing essential opportunities.

Becoming successful is hardly ever easy unless you’re extremely lucky, so it’s important to keep forging ahead even when things get tough.

While it may seem easier to give up sometimes, this is the worst thing you can do and ultimately will only set you back.

Everyone makes mistakes, but it is how you move on from them that really matters.

Accept that mistakes are going to happen and do your best to learn from them so you can move on and keep chasing your dreams.

Chris Pronger is an incredibly talented former professional hockey player who has earned millions for his skills on the ice.

While he has since retired from playing, it is likely his net worth will continue growing due to his entrepreneurial pursuits.

Be sure to check back often to stay up to date with any changes that impact Pronger’s net worth!

As of February 2023, Chris Pronger’s net worth is estimated to be $65 Million.

What do you think about Chris Pronger’s net worth? Leave a comment below.