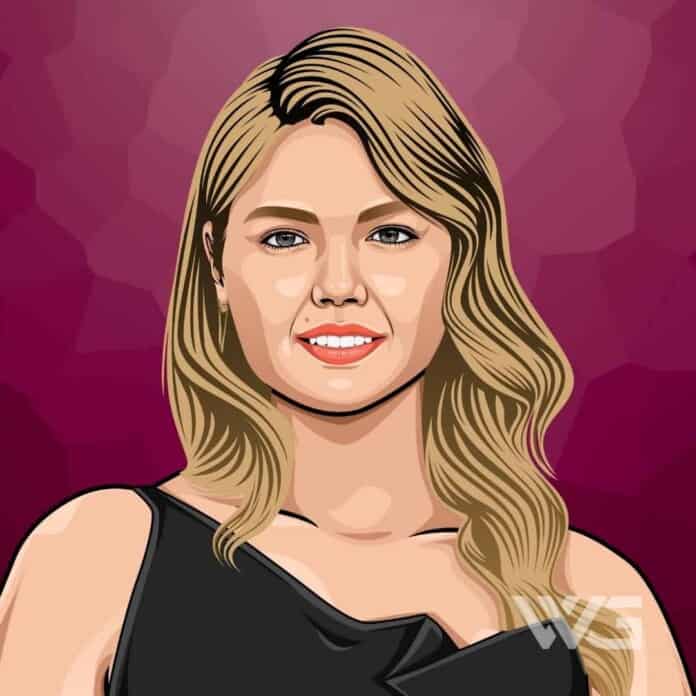 What is Kate Upton’s net worth?

Kate Upton is one of the most recognizable models in the industry, and her image has earned her a steadily increasing net worth.

Although she started out modeling, she has also branched out into acting, making a name for herself as more than just a pretty face.

Katherine Elizabeth Upton was born in 1992 in St. Joseph, Michigan, and is the daughter of Shelley Davis, former Texas state tennis champion, and Jeff Upton, an athletics director.

In 1999, her family moved to Melbourne, Florida, where she attended Holy Trinity Episcopal Academy and rode as an equestrian for the American Painted Horse Association.

As an equestrian, she won three APHA Reserve World Championships.

In 2008, Kate Upton attended a casting call with Elite Model Management and was signed to the company the same day.

Eventually, she moved to New York City and signed up with IMG Models.

From 2010 to 2011, Upton was the face of Guess and appeared in her first Sports Illustrated Swimsuit Issue.

In April of 2011, a viral video of her doing the Dougie at a Los Angeles Clippers game increased her popularity. By 2012, another video of her dancing the Cat Daddy dance also went viral online.

November of 2011 saw her acting debut in the film Tower Heist, followed by an appearance in the slapstick comedy remake of The Three Stooges.

In 2014 she was named the new face of Bobbi Brown Cosmetics.

The same year, she appeared alongside Cameron Diaz, Nikolaj Coster-Waldau, and Leslie Mann in the comedy film The Other Woman.

By 2017 she had taken up acting again, this time in the road trip sex comedy The Layover with Alexandra Daddario and again in James Franco’s The Disaster Artist.

Kate Upton’s net worth is bolstered by her many partnerships and contracts with designers, magazines, and cosmetic lines.

Kate Upton certainly brings home a lot, and with income like this, we expect she’ll become one of the richest models in the world sooner rather than later.

The pair had a daughter, Genevieve, in 2018, who she posts about often on her official Instagram, and for several years Kate owned a boxer dog named Harley.

Although Harley, unfortunately, passed away in 2021, he had his own Instagram account, which is still followed by over 12,000 people.

Upton is Christian, and after a cross necklace she was wearing was taken from her during a photo shoot, she had one tattooed on the inside of her finger so that she would never be without one.

Kate Upton has received many awards and nominations for her work.

While she may not be the most decorated model and actress, she definitely has received a number of accolades.

Here are some highlights from Kate Upton’s career:

How Does Kate Upton Spend Her Money?

With such a large net worth, it’s no surprise that Kate Upton lives a luxurious life.

In January 2022, Kate and her husband Justin listed their L.A. mansion for sale at $11.7 million.

This four-bedroom, five-bathroom Beverly Hills estate is where she has lived since 2016, but after moving to Florida in 2021, Kate decided to sell and give folks a glimpse into how her wealthy family lives.

Outside is a huge deck, a sprawling lawn, and a full-sized tennis court.

Her home in Florida, which cost an estimated $6.5 million, was actually bought in 2015 but has since become the family’s main residence.

On top of all this, it has been reported that the couple also owns an 8,000 sqft mansion in Houston, Texas.

Although we don’t have information on whether she owns some of the most expensive stocks in the world, we wouldn’t be surprised to learn she is also a successful investor.

Kate Upton has reached a lot of milestones that have helped her to develop her substantial net worth.

Here are some of the best highlights of Kate Upton’s career:

Kate Upton is certainly much more than a pretty face, and she has said a number of noteworthy things throughout her career.

Here are our favorite quotes from Kate Upton:

Now that you know all about Kate Upton’s net worth, we can look deeper at the lessons she can teach us about reaching our own goals.

Here are some of the best success lessons to learn from Kate Upton:

Being confident in yourself is something some folks are naturally better at than others, but everyone can do it with the right mindset and positive reinforcement.

Without confidence, you can fall behind in your goals and fail to take important opportunities that can help you on your way to success.

Everyone has their own unique strengths, and it is important to highlight these whenever possible and use them to get ahead.

Although branching out and learning new skills is necessary, don’t neglect your natural skills, as those are the ones that will help set you apart from everyone else.

3. Do What You Enjoy

Working hard is vital for finding success, but you also need to take time to enjoy things so that you don’t get burned out.

Whether that’s treating yourself to some ice cream, taking a walk around your neighborhood, or a vacation across the world, taking a break and finding things to enjoy is just as important as hustling when you’re climbing the ladder of success.

Kate Upton has taken the modeling industry by storm and amassed a huge net worth while doing it.

Between her acting and modeling, we expect her wealth to continue increasing in the upcoming years.

Since Upton’s net worth is increasing so rapidly, be sure to check back often for updates!

What do you think about Kate Upton’s net worth? Leave a comment below.

What is Emmy Rossum's net worth? Introduction As of ,...