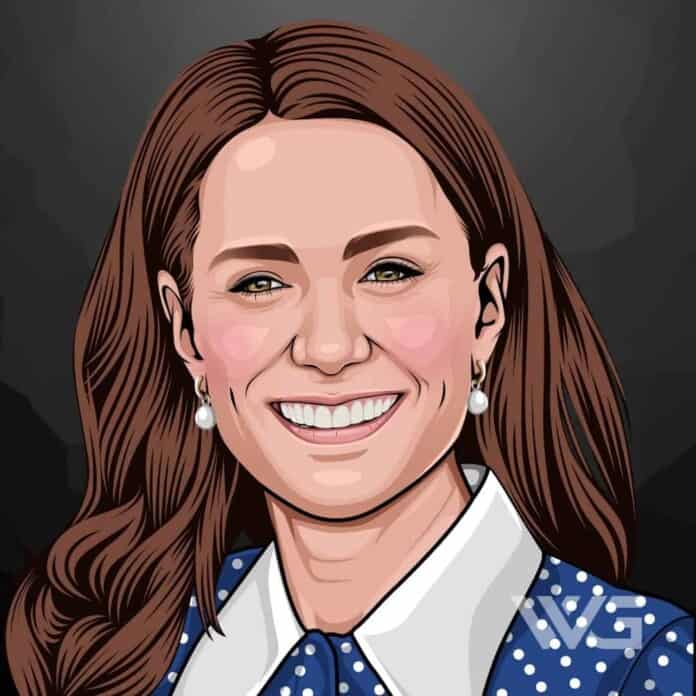 What is Kate Middleton’s net worth?

A member of the royal family since 2011, Kate Middleton has risen to become one of the most well-known and recognizable people in the world.

Since having married Prince William, Kate has taken on numerous royal duties and holds patronage over 20 military and charity organizations, including the National Portrait Gallery and Action for Children.

Named one of the Most Influential People in the World, Kate’s notoriety and wealth have made her a modern icon.

As of October 2022, Kate Middleton’s net worth is estimated to be $20 Million.

Kate Middleton was born in 1982 in Reading to Michael and Carole Middleton.

The eldest of three children, the Middleton family was well-to-do, and at the age of four, young Kate was enrolled at St. Andrew’s School, a private institution in Berkshire.

At Marlborough College, she developed a love of sports and played on the women’s field hockey team, later obtaining three A-Levels in 2000.

Middleton later enrolled at the University of St. Andrews in Scotland, where she studied art history.

While at St. Andrews, she achieved a gold Duke of Edinburgh award and eventually graduated with an undergraduate MA in the history of art.

As the Duchess of Cambridge, Kate is very active in charity work, often focusing on helping young children.

While she has a number of charitable patronages, some of the largest include:

Kate has also acquired the patronage of the All England Lawn Tennis and Croquet Club and the Royal Photographic Society after they were passed down to her by the Queen.

In 2016, alongside the Duke and Prince Harry, Kate helped launch a mental health awareness campaign called “Heads Together” to encourage people to have an open discussion about their mental health issues and remove the stigma.

Kate has also been active in causes surrounding early childhood development and, in 2022, visited Denmark on behalf of the Royal Foundation Centre for Early Childhood.

Often praised for her keen sense of style whenever she makes a public appearance, Kate has become the embodiment of intelligence and grace.

Kate Middleton’s net worth comes largely from investments she made before joining the royal family and from her family business, which is estimated to be worth $35.3 million.

Some of the details we know about Middleton’s earnings include:

As a member of the royal family, even without her individual net worth, it’s safe to say that Kate isn’t in danger of running out of cash anytime soon.

Kate Middleton first met Prince William in 2001, and the couple started dating in 2003.

However, after graduation, the Middleton family was faced with intense scrutiny from British tabloids, leading to numerous warnings being issued from lawyers hired by the Palace and the Middletons.

Prince William proposed during a 10-day trip to the Lewa Wildlife Conservancy in Kenya to celebrate his passing of the RAF helicopter search and rescue course.

The engagement was officially announced in November 2010, and the couple married at Winchester Abbey on the 29th of April, 2011, in a ceremony that was watched by a global audience of 300 million.

Following their marriage, the couple moved into Nottingham Cottage briefly before transitioning to Kensington Palace, which they had renovated for $5.3 million.

In 2012, the royal couple announced their first child, and in July 2013, Prince George was born at St. Mary’s Hospital in London.

Two more children, Princess Charlotte and Prince Louis were born in May 2015 and April 2018, respectively.

In 2022, the couple and their children moved into Adelaide Cottage in Windsor, where the family maintains as normal a life as possible.

The couple posts about their family often on their joint Instagram account, along with photos of their charity work and other public appearances.

Kate Middleton has received a lot of honors as a member of the royal family, as well as some notable awards.

Here are some highlights from Kate Middleton’s career:

How Does Kate Middleton Spend Her Money?

Unlike Prince Harry and Meghan Markle, who have largely been cut off from royal funds, Kate has no real need to spend her own money due to her royal status.

That said, Kate and William have made some noteworthy purchases.

Their $5.3 million renovations on Kensington Palace, one of the most expensive houses in the world, were followed by a further $2 million in renovations which included a kitchen and conservatory overhaul and a new roof.

While the royals are given an allowance to spend on their wardrobes, it’s estimated that Kate regularly spends $400,000 annually on clothing and styling.

When it comes to traveling, the cost can climb as high as $130,000 for a single trip due to the need for charted flights, meals, staff, and security.

While many of Kate’s milestones are documented by the official Royal website, some are more obscure than others.

Here are some of the best highlights of Kate Middleton’s career:

Kate Middleton is remarkably eloquent, and she always seems to know just what to say.

Although she has said many noteworthy things in her time as a royal, we have rounded up the most significant.

Here are our favorite quotes from Kate Middleton:

Now that you know all about Kate Middleton’s net worth, we can look at what her extraordinary life can teach us about reaching our own goals.

Here are some of the best success lessons to learn from Kate Middleton:

Becoming confident in yourself is easier said than done, but it can be essential for finding success.

If you aren’t confident in your abilities, you’re less likely to put yourself out there and find the opportunities that you need.

Kate Middleton is a huge advocate for mental health, and she is a shining example that we need to remove the stigma.

Mental health is just as important as physical health, and there is no shame in getting help when you need it.

3. Ask For Help When You Need It

Speaking of help, no matter what you are doing, you should never shy away from relying on others if you need them.

Whether in your work, daily life, or with health concerns, everyone needs help sometimes, and without it, you may never be able to reach your full potential.

Kate Middleton is an icon, and as the future Queen Consort of England, it is likely that her net worth will only continue to increase as time goes on.

Be sure to check back often as her net worth grows to stay up-to-date!

As of October 2022, Kate Middleton’s net worth is estimated to be $20 Million.

What do you think about Kate Middleton’s net worth? Leave a comment below.