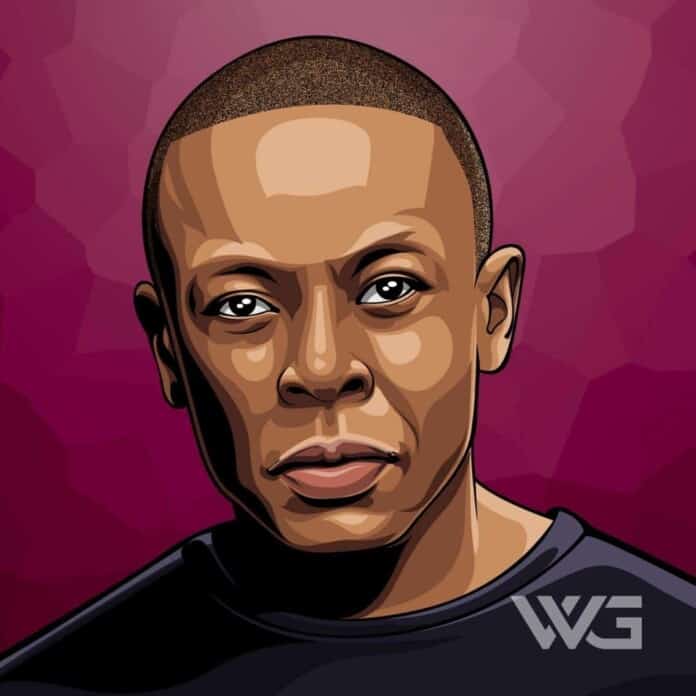 What is Dr. Dre’s net worth?

As of February 2023, Dr. Dre’s net worth is estimated to be $500 Million, which makes him the 3rd richest rapper in the world.

Dr. Dre is an American rapper, producer, and entrepreneur. He started out as a producer for the rap group N.W.A in the ’80s, eventually going solo and moving into entrepreneurship.

He’s worked with some of the best hip-hop artists of all time, and sold his brand ‘Beats By Dr. Dre’ to Apple several years ago for $3 billion!

His parents married in 1964, separated in 1968, and divorced in 1972. His mother later remarried and had three children: two sons Jerome and Tyree, who are both deceased, and one daughter, Shameka.

In the mid 80’s, Dre was working at a local club, Eve After Dark. Dre would DJ at the club, after previously watching many others perform there. It was here that Dre met, DJ Yella, a future member of N.W.A.

The club had a small recording studio in a back room, which was used by Dre, and N.W.A to record some initial demos.

Dre left the group in the early ’90s, after various disputes, and decided to go solo. He released his first single in 1992 under Death Row Records, founded by Suge Knight. His debut solo album was titled ‘The Chronic’.

Dre has worked with the majority of the best artists in rap and hip-hop. He’s become one of the richest rappers in the world, despite all the issues he’s faced, including disputes, lawsuits, loss, and infringements.

Here are some of the best highlights of Dr. Dre’s career:

“Everything in my life has been about sound and making music, so Beats represents just that – the improvement of sound and the dedication to everything I’ve been doing from the day I started.” – Dr. Dre

“When the ideas are coming, I don’t stop until the ideas stop because that train doesn’t come along all the time.” – Dr. Dre

“You got to realize that when I was 20 years old, I had a house, a Mercedes, a Corvette and a million dollars in the bank before I could buy alcohol legally.” – Dr. Dre

“People are always coming up to me, thinking I’ve got some magic wand that can make them a star and I want to tell them that no one can do that. Making hit records is not that easy. But it took me time to realize that myself.” – Dr. Dre

Now you know all about Dr. Dre’s net worth, and how he achieved success; here are 3 success lessons we can all learn from Dr. Dre:

Dr. Dre stated that you shouldn’t be worried about the money. That’s not why you should be fully committed to something. You should do it because of the love you have for it.

If you make that ‘your why’, the money will come eventually. Don’t chase the money, chase your passion.

Things are always changing. In fact, Dre’s initial goal was simply to win. But, he’s said that lots of things change over the years, and your goals start to shift.

You might want to make a note of that. Just because something was your goal in the beginning, doesn’t mean you have to keep it that way. Your goals can change. Your priorities can change.

Dre also said that out of his entire career, there’s only been a grand total of 2 weeks when he’s been out of the studio.

He has so much love for what he does that he’s always working, and he doesn’t care about the distractions or the other activities that friends are getting up to.

Do you want to win? Get back to work.

How much is Dr. Dre worth?

How tall is Dr. Dre?

Dr. Dre has had incredible success in his career. He’s also had a lot of setbacks. The $3 billion Apple deal was the icing on the cake for his career, and who knows what’s next for the doctor.

What do you think about Dr. Dre’s net worth? Leave a comment below.

What is Catherine Reitman's net worth? Introduction  As of ,...