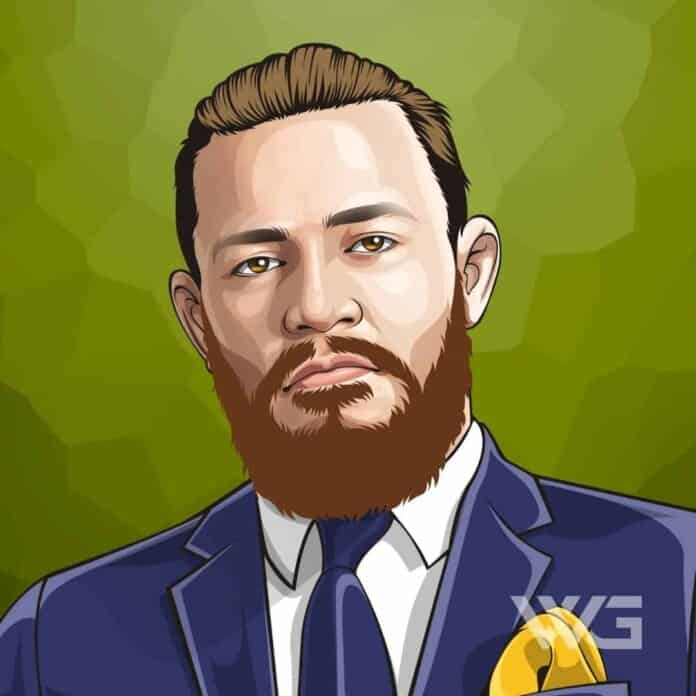 What is Conor McGregor’s net worth?

As of February 2023, Conor McGregor’s net worth is $200 Million, making him the richest MMA fighter in the world.

McGregor is one of only three fighters in UFC history to have won titles in more than one weight class. He’s also recently been in the news for his professional boxing debut against Floyd Mayweather.

Conor McGregor was born in Dublin, Ireland on the 14th July 1988. He was raised in Crumlin and attended school in Coláiste de hÍde in Tallaght.

It was here that Conor’s passion for the sport began to grow. Before becoming interested in fighting, McGregor became a big fan of soccer. He then started boxing at Crumlin Boxing Club when he was 12 years old.

Conor was raised in a working-class family, and after he left school, he undertook a plumbing apprenticeship. During this time, he also started training mixed martial arts with a new friend, and future UFC fighter, Tom Egan.

Conor’s career in mixed martial arts began when he was 18 years old, and made his MMA debut. He won his first amateur fight by TKO against Kieran Campbell, and after the fight was signed to Irish Cage of Truth Promotions.

This is when his professional fighting career began.

McGregor fought professionally for 5 years, before being offered a contract to fight in the UFC. He made his UFC debut in 2013 against Marcus Brimage and was victorious.

Since then, McGregor has become a true UFC sensation, being one of only 3 fighters to win titles in multiple weight classes. And after a huge payout in 2017 for his professional boxing debut against Floyd ‘Money’ Mayweather, he is now the richest MMA fighter in the world.

Throughout his career, Mcgregor has dedicated himself entirely to mastering his craft and improving his skillset. Check out Conor Mcgregor’s workout routine on our fitness site, Jacked Gorilla.

Here are some of the best highlights of Conor McGregor’s career:

“You might win some, you might lose some. But you go in, you challenge yourself, you become a better man, a better individual, a better fighter.” – Conor McGregor

“I’m not going to get somewhere and say, ‘OK, I’m done.’ Success is never final; I’ll just keep on going. The same way as failure never being fatal. Just keep going. I’m going to the stars and then past them.” – Conor McGregor

“The thing about the truth is, not a lot of people can handle it.” – Conor McGregor

View our larger collection of the best Conor McGregor quotes!

Now that you know all about Conor McGregor’s net worth, and how he achieved success; let’s look at 3 success lessons we can all learn from Conor McGregor:

It’s no secret that Conor has an absolute obsession for MMA and all the hard work he puts in. He loves fighting, and he loves it so much that he can’t stop putting in work.

2. Utilize the Power of Visualization

In the past, Conor has spoken on the topic of visualization, and how he has always used this to his advantage. Visualization prepares you mentally for all the things you want to achieve and has become very important to Conor’s success.

Some people don’t believe in visualization, but maybe you should, as it can become a very powerful tool to drive you to greatness.

If there’s one thing that everyone knows about McGregor, he loves to talk. He will trash talk to anyone and everyone who stands in his way. Some think he takes it to ridiculous and far too extreme levels.

It’s most certainly part of the overall game plan, but the important thing to remember is that he backs up the talk. He makes sure he puts in the work so that he can walk the walk as well as talk the talk.

How much is Conor McGregor worth?

Conor McGregor’s net worth is estimated to be $200 Million.

How old is Conor McGregor?

How tall is Conor McGregor?

After losing to Floyd Mayweather in his professional boxing debut, Conor McGregor is now the richest MMA fighter in the world, with a net worth of $200 Million.

What do you think about Conor McGregor’s net worth? Leave a comment below.

What is Peggy Gou's net worth? Introduction  Peggy Gou is a...