Mark Zuckerberg is the founder of Facebook and worth billions of dollars!

Facebook is the number 1 social media platform in the world right now, and to think Zuckerberg is a college drop-out. When it comes to entrepreneurship, there’s a lot that can be learnt from Zuckerberg.

He’s also recently been slowly rising to the top of the list of richest people in the world. Zuckerberg’s not there yet, but he’s gaining on the likes of Warren Buffett and Bill Gates!

Here’s our collection of the best Mark Zuckerberg quotes:

1. “I think a simple rule of business is, if you do the things that are easier first, then you can actually make a lot of progress.” – Mark Zuckerberg

2. “Give everyone the power to share anything with anyone.” – Mark Zuckerberg

3. “In terms of doing work and in terms of learning and evolving as a person, you just grow more when you get more people’s perspectives… I really try and live the mission of the company and… keep everything else in my life extremely simple.” – Mark Zuckerberg

4. “Nothing influences people more than a recommendation from a trusted friend.” – Mark Zuckerberg

6. “All of my friends who have younger siblings who are going to college or high school – my number one piece of advice is: You should learn how to program.” – Mark Zuckerberg

7. “Facebook was not originally created to be a company. It was built to accomplish a social mission – to make the world more open and connected.” – Mark Zuckerberg

8. “Instead of building walls, we can help build bridges.” – Mark Zuckerberg 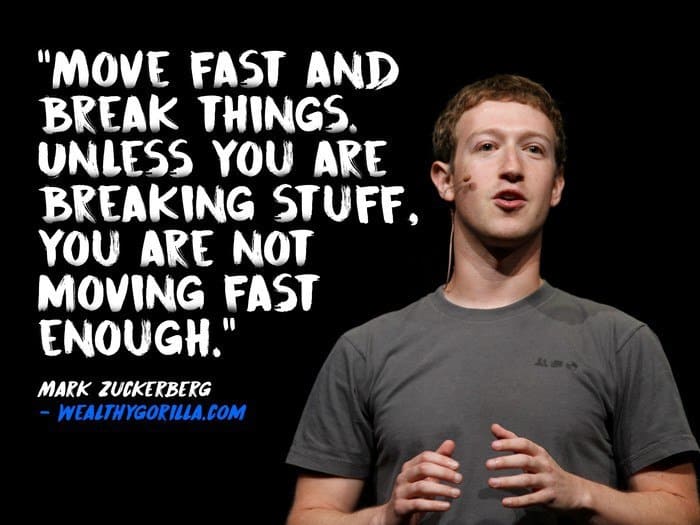 9. “Move fast and break things. Unless you are breaking stuff, you are not moving fast enough.” – Mark Zuckerberg

10. “The biggest risk is not taking any risk… In a world that changing really quickly, the only strategy that is guaranteed to fail is not taking risks.” – Mark Zuckerberg

11. “The question I ask myself like almost every day is, ‘Am I doing the most important thing I could be doing?’” – Mark Zuckerberg

12. “Find that thing you are super passionate about.” – Mark Zuckerberg

13. “So many businesses get worried about looking like they might make a mistake, they become afraid to take any risk. Companies are set up so that people judge each other on failure.” – Mark Zuckerberg

14. “Advertising works most effectively when it’s in line with what people are already trying to do.” – Mark Zuckerberg

16. “Helping a billion people connect is amazing, humbling and by far the thing I am most proud of in my life.” – Mark Zuckerberg

19. “People think innovation is just having a good idea but a lot of it is just moving quickly and trying a lot of things.” – Mark Zuckerberg

20. “I’m here to build something for the long-term. Anything else is a distraction.” – Mark Zuckerberg 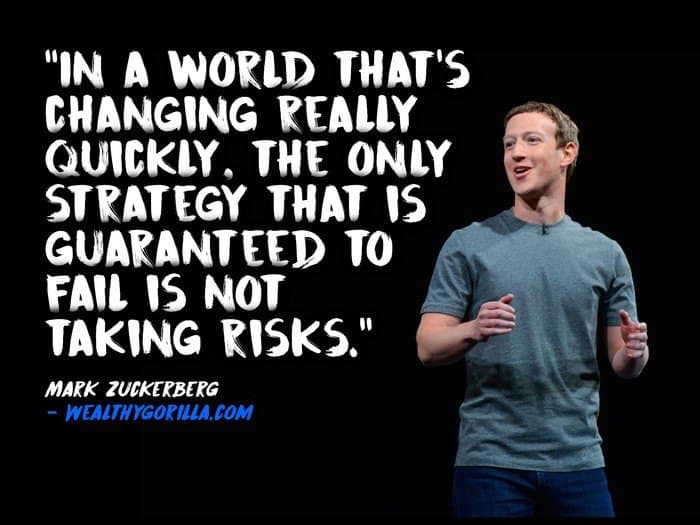 21. “In a world that’s changing really quickly, the only strategy that is guaranteed to fail is not taking risks.” – Mark Zuckerberg

22. “This is a perverse thing, personally, but I would rather be in the cycle where people are underestimating us. It gives us latitude to go out and make big bets that excite and amaze people.” – Mark Zuckerberg

23. “If you just work on stuff that you like and you’re passionate about, you don’t have to have a master plan with how things will play out.” – Mark Zuckerberg

24. “I think that people just have this core desire to express who they are. And I think that’s always existed.” – Mark Zuckerberg

26. “You don’t get to 500 million friends without making a few enemies.” – Mark Zuckerberg

27. “My goal was never to just create a company. A lot of people misinterpret that, as if I don’t care about revenue or profit or any of those things. But what not being “just” a company means to me is building something that actually makes a really big change in the world.” – Mark Zuckerberg

28. “I literally coded Facebook in my dorm room and launched it from my dorm room. I rented a server for $85 a month, and I funded it by putting an ad on the site, and we’ve funded ever since by putting ads on the site.” – Mark Zuckerberg

29. “The question isn’t, ‘What do we want to know about people?’, It’s, ‘What do people want to tell about themselves?’” – Mark Zuckerberg

30. “One of things that I do focus on at Facebook is making sure the culture is very friendly and that people hang out. So instead of having 20% of people’s time working on projects I make people hang out with each other.” – Mark Zuckerberg

31. “I started the site when I was 19. I didn’t know much about business back then.” – Mark Zuckerberg

32. “I made so many mistakes in running the company so far, basically any mistake you can think of I probably made. I think, if anything, the Facebook story is a great example of how if you’re building a product that people love you can make a lot of mistakes” – Mark Zuckerberg

Thanks for viewing this collection of the best Mark Zuckerberg quotes! Don’t forget to share them on social media.

Which are your favorite Mark Zuckerberg quotes? Leave a comment below.