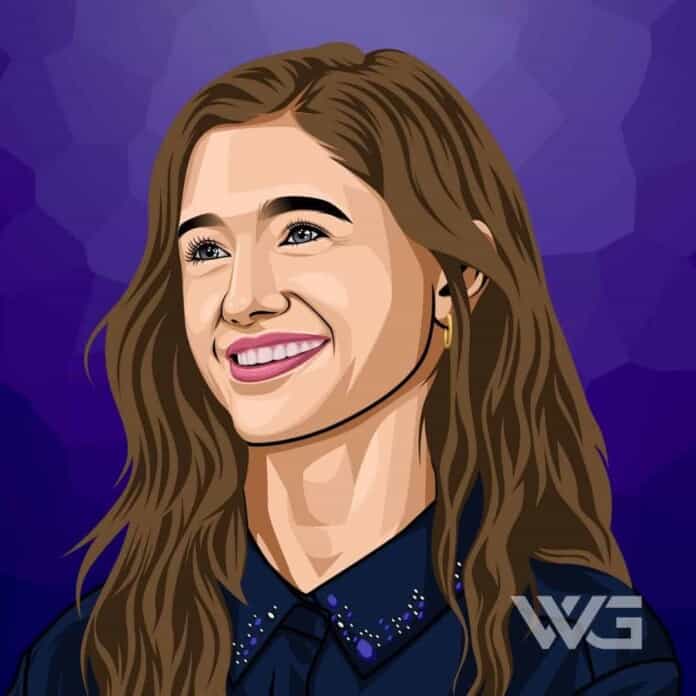 What is Natalia Dyer’s net worth?

As of November 2022, Natalia Dyer’s net worth is roughly $4 Million.

Natalia Dyer is an American actress from Nashville. Dyer is best known for her starring role as Nancy Wheeler in the Netflix science fiction-horror series ‘Stranger Things’.

Natalia Danielle Dyer was born on the 13th of January, 1995, in Nashville, Tennessee, graduating from the performing arts high school Nashville School of the Arts.

Her career began around the age of twelve in 2009, in the family comedic drama ‘Hannah Montana: The Movie’ starring Miley Cyrus. It was not until her late teens, did she land her breakthrough role on Netflix’s horror drama series ‘Stranger Things’.

In 2011, Dyer appeared in ‘The Greening of Whitney Brown’. Dyer then starred in the indie film ‘I Believe in Unicorns’, which premiered in 2014 at SXSW.

On January 29, 2017, at the 23rd Screen Actors Guild Awards show, Dyer and the cast of “Stranger Things” became co-winners for “Outstanding Performance by an Ensemble in a Drama Series”. Fans can see her upcoming features including ‘After Darkness’ and ‘Mountain Rest’.

In 2019, Dyer starred as Coco in the Netflix horror film ‘Velvet Buzzsaw’.

Here are some of the best highlights of Natalia Dyer’s career:

“I do see a lot of roles that are, like, the girlfriend or the love interest or the girl next door. Maybe not totally well-rounded kinds of characters – women who are more of a plot device in away.” – Natalia Dyer

“I think people are going to places that they weren’t able to with television before, and I think Netflix really paved the way for that. With freedom comes better content, and with better content comes great actors and a bigger audience. I think that has just snowballed into a movement for making really great TV.” – Natalia Dyer

“When people approach me, it’s a vulnerable moment for everybody. You can see that sometimes people don’t quite know what to say to you, but they want to come up to you, and you can tell they’re nervous, and it’s really humbling and endearing.” – Natalia Dyer

“When you’re in high school, and you’re trying to get the attention of a guy you like, sometimes you don’t always make the best decisions.” – Natalia Dyer

Now that you know all about Natalia Dyer’s net worth, and how she achieved success; let’s take a look at some of the lessons we can learn from her:

Don’t regret the past, sometimes things happen for a good reason. Life is like a mosaic. From up close it may seem like a mess, but from afar it creates a beautiful picture.

A negative experience is just a story that one allows to dwell in his/her mind. And it should never influence their inner peace or diminish their thrill to shoot for the stars. Remember, it is just a “STORY.

How much is Natalia Dyer worth?

Natalia Dyer’s net worth is estimated to be $4 Million.

How old is Natalia Dyer?

How tall is Natalia Dyer?

Natalia Dyer is an American actress who has starred in the movies ‘Hannah Montana: The Movie’, ‘The Greening of Whitney Brown’, ‘Blue Like Jazz’, ‘Don’t Let Me Go’, ‘I Believe in Unicorns’, ‘After Darkness’, and ‘Long Nights Short Mornings’. She has also starred in the shorts Too Sunny for Santa, The City at Night, and Till Dark.

As of November 2022, Natalia Dyer’s net worth is approximately $4 Million.

What do you think about Natalia Dyer’s net worth? Leave a comment below.

What is Gal Gadot's net worth? Introduction As of ,...