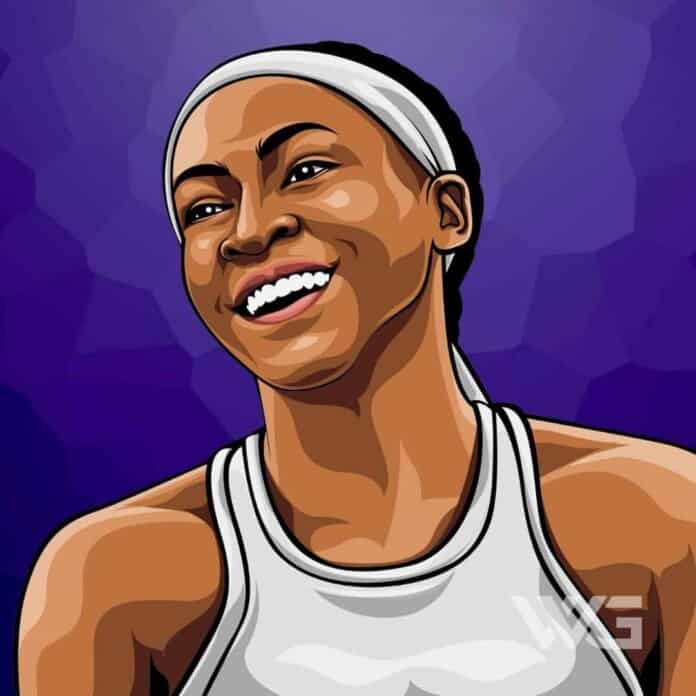 What is Cori Gauff’s net worth?

Cori Gauff is an American tennis player. She is a former world No. 1 junior, having won one junior Grand Slam singles title and another in doubles.

She was the runner-up in the girls’ singles event at the 2017 US Open.

Cori Gauff was born on the 13th of March, 2004, in Florida. Gauff is the daughter of Candi and Corey Gauff, Cori Gauff is named after her father.

Gauff made her debut on the ITF Women’s Circuit in May 2018 as a qualifier in the $25K event at Osprey, where she won her first professional match, against Alexandra Perper.

In 2019, Gauff finished runner-up in doubles at the $100K Midland Tennis Classic alongside Ann Li, losing to Olga Govortsova and Valeria Savinykh.

In her next event at the $25K level in Surprise, Gauff reached the finals in both singles, where she was the runner-up to Sesil Karatantcheva.

The same year, Gauff made her WTA main draw debut as a wild card at the Miami Open and recorded her first WTA match win against Caty McNally. Gauff lost her next match to Daria Kasatkina.

Aged 15 years and 3 months, Gauff was the youngest player to reach the main draw at Wimbledon by qualifying in the Open Era.

Gauff qualified into the main draw of the singles in Washington but lost in the first round to Zarina Diyas.

She was more successful in the doubles, however, where she and Caty McNally reached the final, beating third seeds Miyu Kato and Anna Kalinskaya in the semifinal.

Here are some of the best highlights of Cori Gauff’s career:

“I wasn’t surprised that I won. My dad told me that I could do this when I was eight. My goal is to win it (Wimbledon),” the world number 313, who needed a wildcard to play in qualifying.” – Cori Gauff

“If I went into this match saying, ‘Let’s see how many games I can get against her’, then I most definitely would not have won.” – Cori Gauff

“My goal was to play my best. My dream was to win. That’s what happened. I think people just kind of limit themselves too much.” – Cori Gauff

“Once you actually get your goal, then it’s like what do you do now? I like to shoot really high. So that way I always have many goals along the road, but that way you have the ultimate goal.” – Cori Gauff

“I’ve never played on a court so big. I had to remind myself that the lines on the court are the same size. Everything around it might be bigger, but the lines are the same. After every point, I was just telling myself to stay calm.” – Cori Gauff

Now that you know all about Cori Gauff’s net worth, and how she achieved success; let’s take a look at some of the lessons we can learn from her:

Don’t compare yourself to others. They aren’t comparing themselves to you. (When in doubt, refer back to Number 1.)

2. Learn From a Random Person

Notice something in a random person that makes you smile to yourself and say, “That’s really inspiring.”

How much is Cori Gauff worth?

Cori Gauff’s net worth is estimated to be $3.5 Million.

How old is Cori Gauff?

How tall is Cori Gauff?

Cori Gauff was the runner-up in the girls’ singles event at the 2017 US Open, making her the youngest finalist at the event in the tournament’s history.

What do you think about Cori Gauff’s net worth? Leave a comment below.