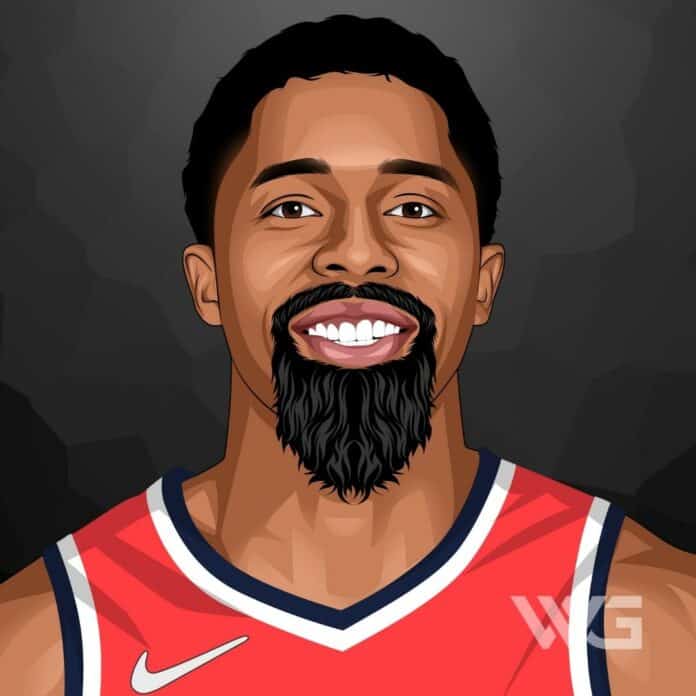 What is Spencer Dinwiddie’s net worth?

Spencer Gray Dinwiddie is an American professional basketball player who was originally selected by the Detroit Pistons during the 2014 NBA draft.

He has since gone on to play for the Grand Rapids Drive, the Windy City Bulls, the Brooklyn Nets, the Washington Wizards, and, most recently, the Dallas Mavericks.

Although he has been playing for a while, Dinwiddie has no plans to retire soon, so he is expected to be seen on the court for many more seasons.

As of January 2023, Spencer Dinwiddie’s net worth is estimated to be $12 Million.

Spencer Gray Dinwiddie was born April 6, 1993, in Los Angeles, California, and he attended William Howard Taft High School, where he was recognized as one of the best athletes since Jordan Farmar.

Considered a three-star recruit, he committed to the University of Colorado in 2011 and made history by scoring over 250 points during his freshman season.

As a sophomore, he earned All-Pac-12 honors and was the top scorer on 15 different occasions.

He finished out his junior season before forgoing his final year of eligibility to declare himself for the 2014 NBA draft.

Spencer Dinwiddie was selected by the Detroit Pistons as their 38th overall pick in the 2014 NBA draft.

He remained with them for two seasons before being traded to the Chicago Bulls in 2016.

With the Bulls, he played five preseason games before starting the 2016-17 season with their D-League affiliate team, the Windy City Bulls.

In December 2016, he signed with the Brooklyn Nets, who he remained with until 2021.

During his time with the Nets, he won the Skills Challenge at the NBA All-Star Weekend in 2017. He also started the 2019-20 season as a reserve until Kyrie Irving hurt his shoulder, which gave him more court time.

He was acquired by the Washington Wizards in 2021 and signed a three-year deal for $54 million. However, in 2022 he was traded to the Dallas Mavericks along with Davis Bertans.

As a member of the Mavericks, Dinwiddie scored a career-high 36 points against the Sacramento Kings and recorded 22 points and eight assists during a loss to the Utah Jazz.

So far, it appears Dinwiddie will be with the Mavericks for at least another season, as nothing has been mentioned about trading him or waiving his contract.

While he may not be as wealthy as Carmelo Anthony or Jimmy Butler, Spencer Dinwiddie has earned a substantial amount from his professional career.

His annual salary has also been steadily increasing each season, which has helped further boost his overall net worth.

Although he isn’t yet one of the highest-paid athletes in the world, he may very well become one if his salary continues its upward trend.

So long as he continues playing and doesn’t retire early, we wholly expect to see his wealth increase substantially in the near future.

Spencer Dinwiddie is currently in a relationship with Arielle Roberson, the sister of NBA player Andre Roberson. Together they have a son, Elijah, who was born in 2018.

While he uses his official Instagram account mainly for photos of his games, he has posted a few photos of his son over the years.

On his official Twitter account, he mainly interacts with fans, talks about his games, and posts about the causes he supports.

Dinwiddie also has his own official NBA page, where you can follow all the latest news about his career and view his stats.

How Does Spencer Dinwiddie Spend His Money?

Situated in Calabasas, California, this mansion cost Dinwiddie $6.9 million, a discount from the $7.7 million it was originally listed for before being bought by the California native.

This contemporary craftsman sits in a gated community and boasts five bedrooms, seven bathrooms, and 6,400 sqft of living space.

In the main living room, there is a floor-to-ceiling fireplace and a wet bar with specialized wine storage where some of the most expensive wines in the world can be kept safe from degradation.

Outside, there is a built-in outdoor kitchen, a fire pit, and an infinity pool and spa for relaxing while taking in views of the surrounding Santa Monica Mountains.

Like Ish Smith and LaMarcus Aldridge, Spencer Dinwiddie has achieved a lot during his career as a professional basketball player.

We’ve chosen to highlight some of his most memorable moments and the ones that have impacted his success the most.

Here are some of the best highlights of Spencer Dinwiddie’s career:

Despite not being as well-known as DeMar DeRozan, Spencer Dinwiddie has accomplished much during his time on the court, and his renown is only continuing to rise.

We definitely expect to see him achieve a lot more in the future as he continues his career with some of the richest NBA teams in the nation.

Spencer Dinwiddie has learned a lot as a professional NBA player, and it has given him valuable insight into how successful people get and stay ahead.

He has quickly become one of the sport’s most dedicated and confident players, who is willing to give 100% during every game he plays.

Here are our favorite quotes from Spencer Dinwiddie:

There is a lot that we can learn from Spencer Dinwiddie and his career as a point guard and shooting guard in the NBA.

Now that you know all about Spencer Dinwiddie’s net worth, we can take a closer look at what he can teach us about reaching our own goals.

Here are some of the best success lessons to learn from Spencer Dinwiddie:

Everyone has their own strengths and weaknesses, which can help or hinder their progress toward success.

You will have to determine what your strongest skills are and which you need help with so that you can plan for the future accordingly.

If you want to become successful, you’re going to have to build your confidence so that you can stand out from the competition around you.

Confidence isn’t something that comes naturally to everyone, so you may have to work consistently to build yourself up. However, it can be vital if you want to make an impact.

You’ll never be able to achieve your goals if you’re not willing to give 100% toward them consistently.

This doesn’t mean that you have to dedicate all of your time to pursuing your goals, but when working towards them, you should never give less than your best.

Spencer Dinwiddie has quickly become one of the best shooting guards in the NBA, and he has worked hard to achieve the success he is enjoying now.

Although he has been playing since 2014, he has no plans to leave the court any time soon, meaning we can expect to see much more from him in the future.

Make sure to check back often so that you won’t miss any updates on Dinwiddie’s ongoing career and growing fortune.

As of January 2023, Spencer Dinwiddie’s net worth is estimated to be $12 Million.

What do you think about Spencer Dinwiddie’s net worth? Leave a comment below.