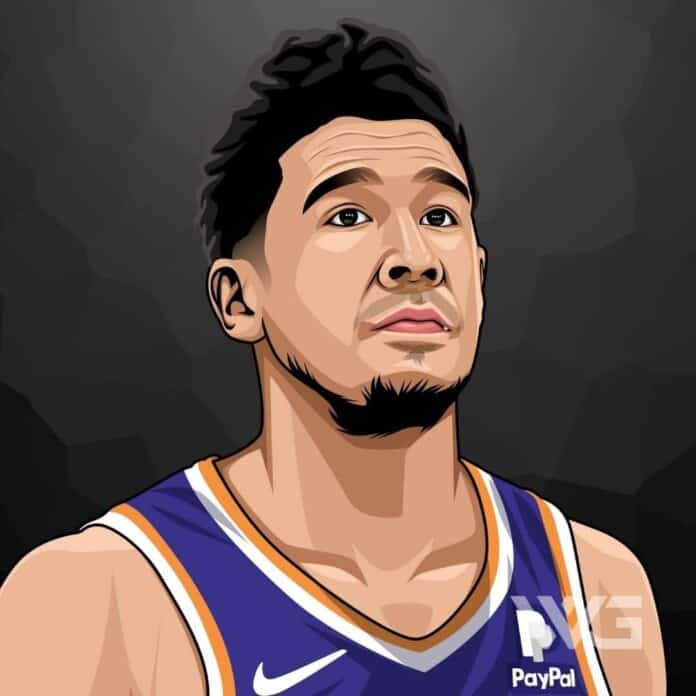 What is Devin Booker’s net worth?

Devin Booker is an American professional basketball player for the Phoenix Suns of the NBA.

Booker attended Moss Point High School in Moss Point, Mississippi, and played in the 2014 McDonald’s All-American Game, before spending one season playing college basketball for the University of Kentucky.

Devin Armani Booker was born on the 30th of October, 1996, in Michigan.

His father was a brilliant young ‘NBA’ player when he met Veronica during one of his tours for the ‘Continental Basketball Association.’

After Devin’s birth, his parents decided that they would both take care of Devin, but he mostly stayed with his mother, as his father remained busy with his international basketball career.

In 2015, Booker was selected by the ‘Phoenix Suns’ as the 13th overall pick. In his first seven ‘Summer League’ games, Devin averaged more than 15 points per game and proved his mettle.

He made his professional ‘NBA’ debut against the ‘Dallas Mavericks’ two days before his 19th birthday. He became the first player in the history of the ‘NBA’ to debut at 18 years of age.

His stunning performance in his rookie season earned praises from basketball legends such as Kobe Bryant and Dwyane Wade. He ended up at the fourth spot in the race for the 2016 ‘Rookie of the Year’ award.

In 2017, he scored 34 points against the ‘Portland Trail Blazers’ to finish his 21st career game with 30+ points. With this, he became the third player in the ‘NBA’ history to achieve the feat.

Here are some of the best highlights of Devin Booker’s career:

“I’m not the strongest, I’m not the fastest, I can’t jump the highest, so for me, it’s doing it in other ways: changing paces, using your body to get open, knowing your defender. A lot goes into it. You have to study the game.” – Devin Booker

“I seen an interview with Kobe; he said what separated him from a lot of people was everyone thought 30 points was a lot. He said he never set himself a limit, and that always sticks in my head. So he never had a limit, I don’t put a limit on anything.” – Devin Booker

“Michigan’s been recruiting me since the eighth grade, so they have a special place in my heart, I’d say, because I’ve visited there seven times, and my mom lives in Michigan, still, and she’d probably like me to stay closer to home and play.” – Devin Booker

“It’s hard because, throughout your whole career, you’re known as the top player, the best on your team, you’re playing the most minutes, and then you might not get in the game. You don’t know when you’re going to get in the game.” – Devin Booker

Now that you know all about Devin Booker’s net worth, and how he achieved success; let’s take a look at some of the lessons we can learn from him:

Time is an equal opportunity employer.

Each human being has exactly the same number of hours and minutes every day. Rich people can’t buy more hours. Scientists can’t invent new minutes. And you can’t save time to spend it on another day. Even so, time is amazingly fair and forgiving.

3. Create Goals For Yourself

Don’t wish it was easier. Wish you were better.

How much is Devin Booker worth?

Devin Booker’s net worth is estimated to be $30 Million.

How old is Devin Booker?

How tall is Devin Booker?

Devin Booker is a professional American basketball player who was drafted by the ‘Phoenix Suns’ as their 13th overall pick and made his debut with them in the 2015–2016 season.

Devin became the youngest player ever to score 70 points in a single ‘NBA’ game.

As of November 2022, Devin Booker’s net worth is estimated to be $30 Million.

What do you think about Devin Booker’s net worth? Leave a comment below.