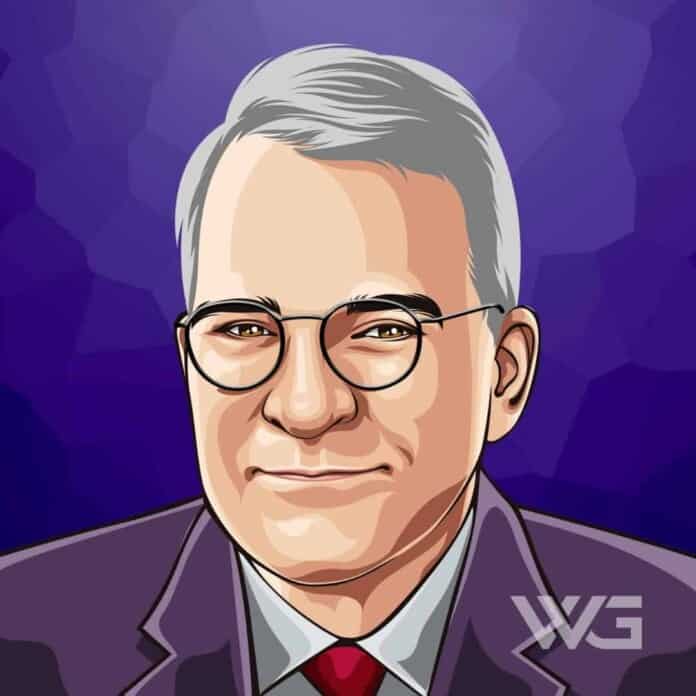 What is Steve Martin’s net worth?

Steve Martin is an American actor, comedian, writer, producer, and musician from Waco, Texas. Martin came to public notice in the 1960s as a writer for The Smothers Brothers Comedy Hour, and later as a frequent guest on The Tonight Show.

He has become a successful actor, as well as an author, playwright, pianist, and banjo player, eventually earning him Emmy, Grammy, and American Comedy awards, among other honors.

Stephen Glenn “Steve” Martin was born on August 14, 1945, in Waco, Texas, to Mary Lee and Glenn Vernon Martin. His father was a real estate executive.

As a teenager, he took up the job of selling guidebooks at Disneyland on weekends and summer breaks. He also performed magic tricks at the Main Street Magic shop and over a period of time mastered several tricks and illusions.

Steve Martin found a job as a writer in the show ‘The Smothers Brothers Comedy Hour’ in 1967 and soon started appearing on television too. Some of his initial television appearances were in ‘The Steve Allen Show’ in 1969 and ‘The Virginia Graham’ Show, in 1970.

He became a very popular comedian by the mid-1970s with frequent appearances on ‘The Tonight Show Starring Johnny Carson’, ‘The Gong Show’, and NBC’s ‘Saturday Night Live’ (SNL).

Motivated by the success of his stand-up career he released two albums in the 1970s: ‘Let’s Get Small’, and ‘A Wild and Crazy Guy’. Both were big hits and the latter peaked at No. 2 spot on the U.S. sales chart and sold over a million copies.

In the 1997 thriller, ‘The Spanish Prisoner’, he played the darker role of Jimmy, a suspicious character who develops an interest in the work of a young businessman. The film was nominated by the Mystery Writers of America for the Edgar Award for Best Motion Picture Screenplay.

Steve Martin also loves to write and he published ‘Shopgirl’, a novella in 2000 which was followed by another novella, ‘The Pleasure of My Company’ in 2003.

Here are some of the best highlights of Steve Martin’s career:

“I studied with the Maharishi for many years, and really didn’t learn that much. But one thing that he taught me, I’ll never forget: ‘ALWAYS…’ no, wait– ‘NEVER…’ no, wait, it was ‘ALWAYS carry a litter bag in your car. It doesn’t take up much room, and if it gets full, you can toss it out the window.” – Steve Martin

“You know, a lot of people come to me and they say, “Steve, how can you be so fucking funny?” There’s a secret to it, it’s no big deal. Before I go out, I put a slice of bologna in each of my shoes. So when I’m on stage, I feel funny.” – Steve Martin

“I have found that– just as in real life–imagination sometimes has to stand in for an experience.” – Steve Martin

Now that you know all about Steve Martin’s net worth, and how he achieved success; let’s take a look at some of the best lessons we can learn from him:

If you want to get good at speaking, you must be prepared to work at it. Being a good speaker is rarely an overnight thing. It takes time.

The audience comes first. You must remain focused. I can relate to the quote below. Enjoyment while performing was rare—enjoyment would have been an indulgent loss of focus that comedy cannot afford.

Don’t forget about the transitions in your speech. They help to hold it together.

How much is Steve Martin worth?

Steve Martin’s net worth is estimated to be $140 Million.

How old is Steve Martin?

How tall is Steve Martin?

Steve Martin is a multiple award-winning American comedian, actor, and writer who first gained notice as a writer for the ‘Smothers Brothers Comedy Hour’. He became particularly famous after a guest appearance in NBC’s ‘Saturday Night Live’ (SNL) and was invited to be the show’s guest host 15 times.

What do you think about Steve Martin’s net worth? Leave a comment below.