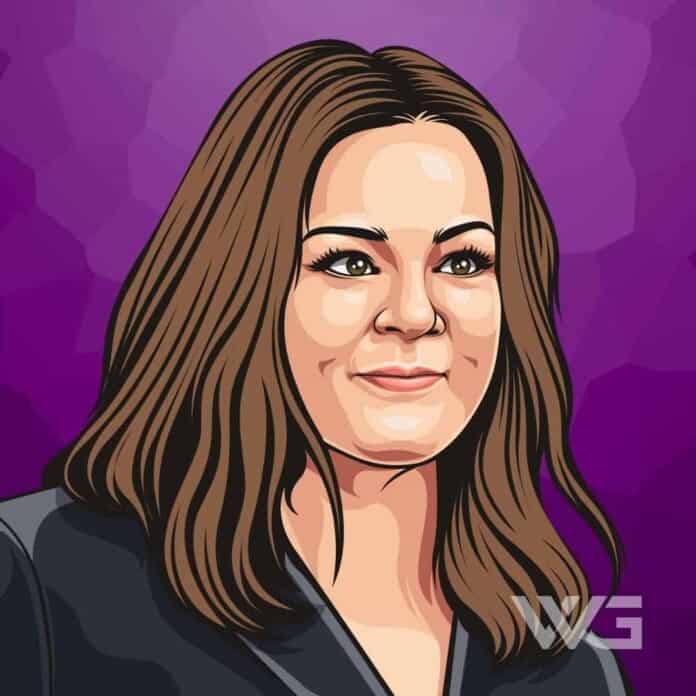 What is Melissa McCarthy’s net worth?

As of February 2023, Melissa McCarthy’s net worth is estimated to be $90 Million.

Melissa McCarthy is an American actress, comedian, writer, and producer from Illinois.

McCarthy was named by Time as one of the 100 most influential people in the world in 2016, and she has been featured multiple times in annual rankings of the highest-paid actresses in the world.

Melissa Ann McCarthy was born on the 26th of August, 1970, to Michael and Sandra McCarthy, in Plainfield, Illinois. Her father has Irish roots, while her mother has a mixed ancestry of English and German.

She was raised on a farm with a strict Catholic upbringing. She is related to the actress Jenny McCarthy and the sports player Joanne McCarthy.

McCarthy received her first role in television for the NBC comedy series ‘Jenny’ in which she starred opposite her cousin Jenny McCarthy.

Her first film appearance was in the comedy movie ‘Go’ where she had a minor role. Thereafter, she was seen in minor roles in movies such as ‘Drowning Mona’, ‘Charlie’s Angels’, ‘The Third Wheel’, and ‘The Life of David Gale’.

In 2000, she did a voiceover for the character DNAmy for the three episodes of the animated series ‘Kim Possible’. She also appeared in two episodes as Molly in the TV series ‘D.C.’.

Her second big break arrived when she was cast as Dena Stevens in the ABC sitcom ‘Samantha Who?’. Melissa again played the role of the protagonist’s best friend but with a twisted plotline.

In 2014, she starred opposite Bill Murray in ‘St. Vincent’. The movie was a moderate commercial success with favorable reviews.

She starred in the comedy ‘Spy’ in 2015. The movie became a success and McCarthy received a Golden Globe nomination for her role. She was subsequently awarded a star in the Hollywood Walk of Fame.

As of February 2023, Melissa McCarthy’s net worth is roughly $90 Million.

Here are some of the best highlights of Melissa McCarthy’s career:

“I felt really bad for someone who is swimming in so much hate. I just thought that’s someone who’s in a really bad spot, and I am in such a happy spot.” – Melissa McCarthy

“Comedy needs to be a living thing, but I think without a great script and fully realized characters, you cannot keep it living. Otherwise, it just becomes long and rambling indulgent.” – Melissa McCarthy

“I think if anyone tells you the odds are slim, just keep walking. Just do whatever the hell you want to do, because they don’t know what they’re talking about. When you love something, and you work really really hard at it, you can do it.” – Melissa McCarthy

“I’ve grown to love L.A., but it’s the most socially awkward place. All these people have come there not to be something but to pretend to be someone trying to be someone. Even in line for coffee, you’re standing with someone who’s trying to be so interesting.” – Melissa McCarthy

“It’s like I’m managing to achieve all this success in spite of my affliction … Would you ever put that in the headline for a male star?” – Melissa McCarthy

3 Lessons From Melissa McCarthy About Parenting

Now that you know all about Melissa McCarthy’s net worth, and how she achieved success; let’s take a look at some of the lessons we can learn from her about parenting:

1. It’s Easy To Get Stuck In a Rut, Especially After You Have Kids

You have kids, and suddenly you’re going to bed at 8pm, not going out to dinner, not seeing movies in the theater anymore. But Melissa, and her character Deanna (who becomes known as Dee Rock once she embraces her new life) believes you should always keep possibilities open.

Life’s not over when you have kids. You’re not done once you’re out of your 20s. ‟You can redefine yourself,” Melissa told me, hinting that she might move to Portugal at age 70 and grow beans.

2. Mom Guilt Is a Waste Of Time

Melissa mentioned that her mom worked, as did the mom of her husband, Life of the Party director, and co-writer, Ben Falcone. But back then, moms didn’t seem to have as much guilt around working. They needed money, so they worked, and then they made sure their time with their kids counted.

3. Melissa’s Favorite App As a Parent Is… Facetime

It’s not about what friends ate for lunch or filling in “What Gilmore Girl Character Are You?” quizzes. Come on, she’s busy! What Melissa loves about Facebook is that it helps her keep in contact with her kids while she travels.

How much is Melissa McCarthy worth?

Melissa McCarthy’s net worth is estimated to be $90 Million.

How old is Melissa McCarthy?

How tall is Melissa McCarthy?

Melissa McCarthy is an acclaimed American actress, who became a household name as one of the titular characters in the hugely successful sitcom ‘Mike and Molly’. She was immortalized with a star on the Hollywood Walk of Fame and was listed by Forbes as one of the highest-paid actresses in American film.

What do you think about Melissa McCarthy’s net worth? Leave a comment below.

What is Kevin Gates' net worth? Introduction As of ,...