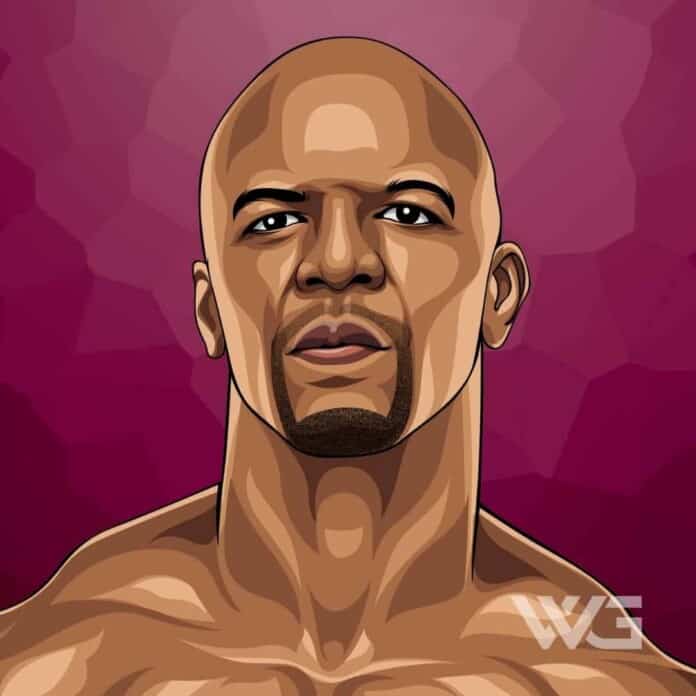 What is Terry Crews’ net worth?

As of November 2022, Terry Crews’ net worth is estimated to be roughly $25 Million.

Terry Alan Crews is an American artist, actor, and former American football player. Crews have also hosted the games shows who wants to be ‘Who Wants To Be a Millionaire’.

He has also starred in films including ‘Friday After Next’ (2002), ‘White Chicks’ (2004), and ‘Idiocracy’ (2006). Crews started his career as a football player in the NFL and decided to pursue his acting career after that.

He has earned his high net worth through his acting career and as voice acting in animated films.

Terry Crews was born in Flint, Michigan on the 30th of July, 1968. He is the son of Terry Crews Senior and Patricia Crews. Crews grew up in a Christian household in Flint and was mainly raised by his mother. His father was an alcoholic.

He was drafted by the Los Angeles Rams in 1991 and pursued his football career after that before he started his career as an actor in 1997.

Crews started his early career as an actor in 1997 when he retired from his football career. He took on the role of T-Money on the TV action show ‘Battle Dome’ (1999).

Terry Crews’ face was beginning to be seen everywhere on TV screens when he had roles in ‘White Chicks’ (2004), ‘The Longest Yard’ (2005), and ‘Norbit’ (2007). Crews also reprised his role as Hale Ceaser in Expendables in two sequels and a video game based on the series.

He became a reality star in the BET show ‘The Family Crews’ (2010-2011) which featured his entire family. Crews also starred in three popular TV shows including ‘Are We There Yet?’, ‘Arrested Development’ and the Golden Globe-winning ‘Brooklyn Nine-Nine’.

In 2010 Crews started to collaborate with the BET Network and launched ‘The Family Crews’ which lasted two seasons. He also has done voiceover work for projects such as ‘American Dad!’ and ‘Cloudy With a Chance of Meatballs 2’ (2013).

Since then Crews has built up an incredible net worth. He has also continued his game show hosting duties with Netflix on its reality series ‘Ultimate Beastmaster’ which premiered in 2017.

In 2018 Crews starred in Deadpool 2 as the role as Bedlam, alongside Ryan Reynolds.

Here are some of the best highlights of Terry Crews’ career:

“The thing that you think is imperfect about you is the thing that makes you who you are. It separates you from everybody else. I have a scar on my lip, and for years I hated it. But now its become my thing. It’s like, without it, I’m not me. You can’t be perfect, so enjoy your imperfections. I can’t stress that enough.” – Terry Crews

“I told everyone I would never be an actor. People used to tell me, ‘Hey, you got a good look. You should try.’ And I was like, ‘Nah. That’s not me.’ And then, the moment I tried it, I found I loved it more than anything in the world, and that taught me a lesson. That is, just go for it.” – Terry Crews

“What shocked me, and what I wasn’t prepared for, was just how brutal and how unethical some people can be in the NFL. I mean, there were some great people, but there were some real snakes, too. I was like, ‘Holy cow!’ But it made me a better person, and it got me ready for other things.” – Terry Crews

“These guys want to do their dirt and then be quiet about it. You think it’s the end of the game, but I’m telling you right now — it’s the third quarter. Bring your ass back out on the field.” – Terry Crews

“You work hard because you’re inspired to, not because you have to. Work becomes fun, and you have worked hard for days because this life is not a ‘young man’s game.’ It is an ‘inspired person’s game.” – Terry Crews

“I’d rather die doing something I feel is great and amazing rather than be safe and comfortable living a life I hate.” – Terry Crews

View our larger collection of the best Terry Crews quotes!

Now you know all about Terry Crews’ net worth, and how he achieved success; let’s take a look at some of the lessons we can learn from him:

1. Don’t let your past define you

Try to embrace your past. We’ve got to define our circumstances for ourselves. Our sense of ourselves is all we have in this world. Don’t let the past define you for who you are.

Whether it’s moving city, a break-up, or starting your own business, once you realize that change is not easy, you can start to reinvent yourself. The goals that we want to achieve will require you to become something more to make it happened.

3. Get out of your comfort zone

If you never take risks you will never be able to achieve the goals that you are working toward to. By going outside your comfort zone you can achieve much more. By hanging out with new people, creating new experiences and challenge yourself to constantly be learning. Don’t fear change.

How much is Terry Crews worth?

Terry Crews’ net worth is estimated to be $25 Million.

How old is Terry Crews?

How tall is Terry Crews?

Terry Crews is one of the most influential icons and actors in the film industry. He has collaborated among other stars in the most popular movies in the last two decades.

What do you think about Terry Crews’ net worth? Leave a comment below.

What is Mark Ingram's net worth? Introduction  As of ,...