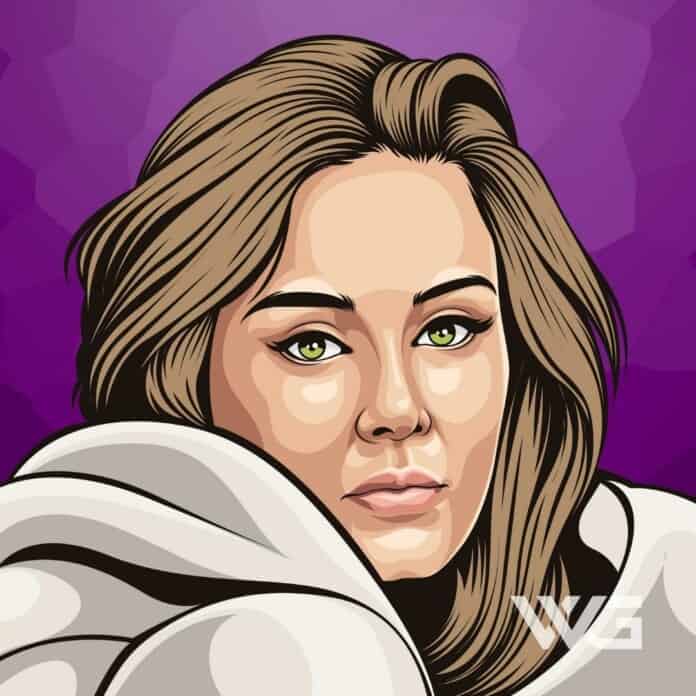 What is Adele’s net worth?

As of December 2022, Adele’s net worth is roughly $220 Million, making her one of the richest female singers in modern time.

Adele Laurie Blue Adkins was born on the 5th of May, 1988, in Tottenham, England.

Adkins is the daughter to Mark Evans and Penny Adkins. Adele developed a passion for music at a young age and started singing. She was influenced by the Spice Girls and enjoyed the works of Lauryn Hill, Destiny’s Child and Mary J. Blige.

When Adele was 14 years old she found the collection of Etta James and Ella Fitzgerald at her local music store and was fascinated by their music.

Adele began her professional music career in 2008 when she released her debut album, ’19’. The album featured two popular lead singles “Hometown Glory” and “Chasing Pavements” which propelled her to overnight fame.

The same year, she signed a deal with Columbia Records and XL Recordings for her foray into the United States. Later that year, her world tour ‘An Evening with Adele’ began which lasted till June 2009.

She released her second and the much-anticipated studio album titled ‘21 in 2009’, again named for her age when she recorded it. The album was a success and she received much appreciation for its classic American R&B and jazz style. Anchored by hits like “Rolling in the Deep” and ‘Someone Like You” the record was a monster hit worldwide.

The album’s another single “Set Fire to the Rain” became Adele’s third No. 1 single on the Billboard Hot 100.

In 2012, she composed and recorded the theme song titled “Skyfall’ for the eponymous James Bond film. Upon its release, the song became a chartbuster and rose to No. 2 on the UK Singles Chart.

How Does Adele Spend Her Money?

Adele paid $4.9 million for an 18th-century manor house in Sussex. In 2012, the singer snapped up a $6.9 million house in Kensington, West London. Her property empire also includes a $6.1 million seaside house in Hove.

Adele is often spotted in Linda Farrow sunglasses and Christian Louboutin heels. The sunglasses cost $491 and the heels cost $614. She hires her make-up artist for key events which can cost up to $12,200 a year.

When it comes to her safety, she has a professional lifeguard that costs $86,000 a year.

She is also rumored to own a $98,000 Range Rover in black. In 2014, The Sun revealed that Adele had reportedly spent $18,000 on a playhouse for Angelo, complete with turrets, electricity, and a balcony.

Here are some of the best highlights of Adele’s career:

“I think it’s really important that you don’t think you’re great. Because once you get to that point, you just fuck everything up. You think that everyone’s going to think you’re great all the time, and that’s rubbish.” – Adele

“I think I remind everyone of themselves. Not saying everyone is my size, but it’s relatable because I’m not perfect, and I think a lot of people are portrayed as perfect, unreachable and untouchable.” – Adele

“The bigger that your career gets, the smaller your life gets.” – Adele

“I used to fucking love the drama of all of it, but now I’m a mum I only have so much head space. I’ve got to clear a lot of stuff the fuck out, which is really therapeutic, ’cause I can really hold a grudge. Life is so much easier when you don’t hoard your past.” – Adele

“Life is so much easier when you don’t hoard your past.” – Adele

“I don’t think sadness is always devastating. It can be quite uplifting and joyful as well and sometimes, you have to let yourself be sad in order to move forward, so once I sort of started looking at it like that, I was quite happy to do it and also I felt like I didn’t need to let myself go this time in order to access my creativity, so that was good.” – Adele

View our larger collection of the best Adele quotes!

Now that you know all about Adele’s net worth, and how she achieved success; let’s take a look at some of the lessons we can learn from her:

1. Take Time to Slow Down in Life

Find a quiet place with beautiful scenery where you can just sit, drink your coffee or tea, relax and think. It brings life back into perspective instead of mindlessly living so quickly day-to-day.

It’s okay not have found love yet. Learn to be the best person you can be and live the life you can so that when you do find love, you can give them everything and not have to restrain.

3. Be Giving to Others

Give to others and always try to help when they need help.

How much is Adele worth?

Adele’s net worth is estimated to be $220 Million.

How old is Adele?

How tall is Adele?

Adele has become one of the best-selling artists of our times. Her flair for music eventually caught the attention of record labels, and after graduating, she signed a deal with XL Recordings.

After building anticipation in Britain with some well-received live performances, Adele released her first album ‘19’ in 2008 which debuted at No. 1 on the British album chart.

What do you think about Adele’s net worth? Leave a comment below.